10 Unusual Beaches You Have Never Heard Of 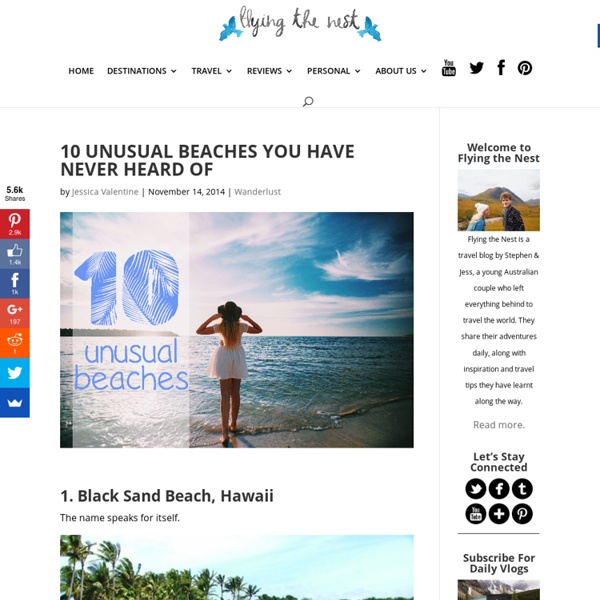 1. Black Sand Beach, Hawaii The name speaks for itself. (source) 2. Pink Sand Beach, Bahamas Again, the name gives it away. (source) 3. And you thought The Maldives couldn’t get any prettier! (source) 4. This secret paradise was created when the Mexican government in the early 1900’s made a bombsite out of the area, blasting a huge hole on the canopy of the grotto. (source) 5. Not only is Whitehaven Beach a photographers dream, it has been awarded the most eco-friendly beach in the world! (source) 6. Make sure you head down with a shovel because at this beach you can dig your very own DIY spa. (source) 7. We have been lucky enough to visit the mind blowing Maho Beach, here you can literally jump up and touch a plane as it lands meters away from you at Princess Juliana International Airport. (source) 8. Every morning, the sea at Chandipur Beach disappears, receding up to 5 kilometers from the shore. (source) 9. (source) 10. (source) Do you want to go to any of these beaches?

15 Reasons Why Scotland Must Be On Your Bucket List Scotland has got way more going for it than just kilts and bagpipes. The country is seeping in history and has miles upon miles of gorgeous landscapes. It’s home to a relatively diverse terrain, complete with tall mountains, several islands, sea-side cliffs, and lush forests. The geography makes for an absolutely stunning country and a perfect setting for photos, as you can clearly see below.1. The Quiraing The Quiraing is a landslip on the Eastern face of Meall na Suirmach on the northernmost summit of the Trotternish Ridge.

thesubstantial When you think of bodyguards in the United States, you probably envision a big, burly man who may or may not be dressed like someone from a Men in Black film. In China, though, if you want someone to protect your life, youd be better off hiring one of the badass women from one of the many female bodyguard training facilities located throughout the country. If you think that a woman would be unqualified to be a bodyguard, you need to see what these ladies can do. All of the women in the program are put through rigorous self defense training. They learn a multitude of grappling techniques, such as the Americana…. …triangle choke… Panorama California, Oregon, Washington 2008 (Crater Lake, Olympic, Mount Rainier, North Cascades, Newberry Crater) Mount Rainier from Skyline Trail Mount Fremont Lookout (Mount Rainier NP) Sahale Arm near Cascade Pass and Doubtful Lake (North Cascades) Sahale Peak and Doubtful Lake (North Cascades)

9 offbeat things to do in London London is full of interesting and unusual things to do. Photo by EO1. So you’ve hit up the museums and all the other usual suspects and you’re looking for something a little different to do in the British capital? Well look no further. travelfeed Another cheap Eurozone country is Portugal. Here you’ll find beautiful beaches, wine country, stunning cliffs, and historic cities at bargain prices. Lisbon is also one of the most affordable cities to stay in a 5-star hotel. Throw in helpful, outgoing locals who serve up delicious food (especially seafood), and you have the making of a perfect place. I was blown away by Portugal and how little anybody ever talked about it.

www.worldofwanderlust TOP 20: 20 Places to See in your 20s 20. Lantern Festival, Taiwan Here’s a photo you’ve likely seen doing the endless rounds on social media – and it’s little wonder due to the spectacular nature of the photograph, which encapsulates the spirit and wonder of the Pingxi Sky Lantern Festival in Taiwan. 19. Great Wall of China Too beautiful to be real? 16 surreal landscapes found on Earth These bizarre locations may seem like a series of elaborate movie sets, but they are real destinations that you might want to see for yourself. Photo: Greg Mote/Flickr The Wave, Arizona, U.S.

Amazing Festivals Around The World That You Should See Before You Die Tweet Once a year some of the countries around the world hold magical and outrageous festivals. Some like the Brazilian carnival and Spanish bull chase are famous world wide while others few people know about. So if you fancy living it up then check out our list of 20 of the most amazing festivals from around the world that we recommend you should see before you die. 1. Carnaval — Rio de Janeiro, Brazil – Feb. 28 – March 4 (for 2014) 8 Amazing Inexpensive Countries To Live In For A Year Have you ever thought about chucking it all and moving to a place where the greenback goes farther? Though many of us do, the spots we used to consider cheap—the Bahamas in the 1970s, Paris in the ’60s—aren’t so inexpensive now. Don’t worry. There are still plenty of places where the slightly well-heeled can live comfortably without giving up an arm and a leg.

Amazing Photographs and the Stories Behind Them Ever wondered what barbecuing on top of a moving submarine could be like? Or walking along a 3D crosswalk, and even a mast? Or seeing snow for the first time? Look no further. Japanese dogu statues These Japanese Dogu statues were made by the Jorom people and dated to about 5000 BC. They can be found in the Japan Archaeological Collection of Tohoku University, Sendai. These statues are one of those anomalies that, if you really want to look with an open mind, will bring you volumes to read written by people who are convinced these are beings in pressurized suits and even those who believe they have "translated" the designs on them; they can be correlated to actual mechanical and technical equipment as we know it today. Tightly cuffed armbands, mouth filters, pressurized suits, eye wear to see in our atmosphere, shoulder pads, gloves, equipment? For basic starters, the figures are wearing goggles which were unknown then.

www.earthporm Every year all around the world a wide variety of crazy festivals take place. Some are colorful, others are messy, and many more are simply beautiful. Here we countdown 17 of the craziest festivals from all around the world, the only requirement is that they bring people from all walks of life closer together. 1. Holi Color Festival in India