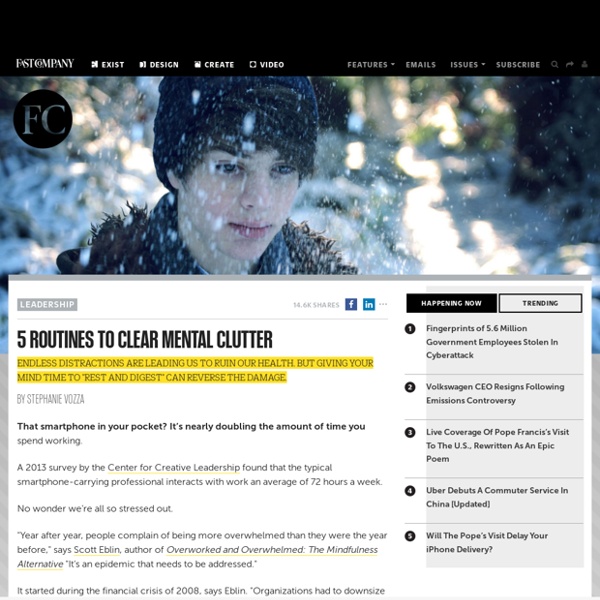 That smartphone in your pocket? It’s nearly doubling the amount of time you spend working. A 2013 survey by the Center for Creative Leadership found that the typical smartphone-carrying professional interacts with work an average of 72 hours a week. No wonder we’re all so stressed out. "Year after year, people complain of being more overwhelmed than they were the year before," says Scott Eblin, author of Overworked and Overwhelmed: The Mindfulness Alternative "It’s an epidemic that needs to be addressed." It started during the financial crisis of 2008, says Eblin. For Eblin, an executive coach and president of the Eblin Group, the impact of stress hit home in 2009 when he was diagnosed with multiple sclerosis. "Managing MS is about managing stress," he says. The entry point to mindfulness is awareness, but Eblin says the endless amount of distractions in today’s world makes it difficult. The opposite of fight or flight is "rest and digest." 1. 2. What was supposed to happen? 3. 4. 5.

The Exact Amount Of Time You Should Work Every Day Editor's Note: This is one of the most-read leadership articles of 2014. Click here to see the full list. You know that taking frequent breaks is good for your productivity, focus, and creativity, but you just never seem to get around to it. You feel stressed and exhausted when you hammer away at your keyboard all day, and the evidence is everywhere. "All efforts to control behavior, to perform and to focus draw on that pool of psychological energy. Recently, the Draugiem Group, a social networking company, added to this growing body of research. "Turns out, the secret to retaining the highest level of productivity over the span of a workday is not working longer—but working smarter with frequent breaks," wrote Julia Gifford in The Muse when she posted the study’s results. The Draugiem Group’s study highlights what researchers have been saying for years—that our brains simply weren’t built to focus for eight-full hours a day. Schedule breaks into your daily calendar.

How can you change from a fixed mindset to a growth mindset? Step1. Learn to hear your fixed mindset “voice.” As you approach a challenge, that voice might say to you “Are you sure you can do it? Maybe you don’t have the talent.” “What if you fail—you’ll be a failure” “People will laugh at you for thinking you had talent.” As you hit a setback, the voice might say, “This would have been a snap if you really had talent.” As you face criticism, you might hear yourself say, “It’s not my fault. Step 2. How you interpret challenges, setbacks, and criticism is your choice. So as you face challenges, setbacks, and criticism, listen to the fixed mindset voice and... Step 3. As you approach a challenge: THE FIXED-MINDSET says “Are you sure you can do it? THE GROWTH-MINDSET answers, “I’m not sure I can do it now, but I think I can learn to with time and effort.” FIXED MINDSET: “What if you fail—you’ll be a failure” GROWTH MINDSET: “Most successful people had failures along the way.” GROWTH MINDSET: “If I don’t try, I automatically fail. As you hit a setback:

5 Ways to Make Your To-Do Lists More Effective To-do lists seem pretty straightforward: A list of all of the tasks you plan to accomplish during any given day or week. And, really, there are few things more satisfying than drawing lines through each entry. Progress! But, many times, they balloon to unrealistic levels, and we end up feeling overwhelmed and ineffective. 1. When you take a few minutes to write your to-do list the night before, you can hit the ground running the next morning, Pozen advises. 2. Everything that goes on your daily to-do list should fit two criteria: It should be something important that you need to do--versus that which doesn’t really need to be done or which can be delegated to someone else--and something that needs to be done on that day. “When people don’t take control, they go through their days passively. 3. Whether it’s five minutes or two hours, include an estimate of how long it will take to complete, recommends Omar Kilani, cofounder of popular to-do list app Remember The Milk. 4. 5.

17 Small Productivity Habits The Mini-Habit The idea behind mini habits is that you can get to a larger habit if you start small, create simple goals, and aim for consistency. In his book Mini Habits: Small Habits, Bigger Results, Stephen Guise gives the example of “The One Pushup Challenge.” He was doing what a lot of us do. Feeling guilty about not working out, he tried to fit years worth of exercise into the first workout which created an all or nothing attitude (not to mention a focus on goals and not process.) Well, one day he decided to do the opposite. In Habit Stacking: 97 Small Life Changes That Take Five Minutes or Less, author S. The core idea behind the mini-habits concept is that you can build a major habit by thinking small enough to get started. Habit-Stacking The purpose of habit-stacking is to create simple and repeatable routines (managed by a checklist). According to Scott there are 8 Elements of a habit-stacking routine. 17 Small Productivity Habits #1 Drink a Large Glass of Water #2. #3. #4. #5.

The Best 3 Ways to Deal With Failure (Plus 5 Painful Ones To Avoid) Are your ways of dealing with everyday failures helping or hindering? Acceptance, positive reframing and humour are the best three ways to deal with failure, according to psychological research. These three strategies make people feel the most satisfied at the end of the day. The study, published in the journal Anxiety, Stress & Coping, had 149 people keeping daily diaries for up to two weeks (Stoeber & Janssen, 2011). They reported the most irritating failure they had during the day, how they coped with it and how satisfied they felt at the end of the day. People spontaneously used all sorts of coping strategies. The results showed, though, that these three techniques left people feeling the most satisfied at the end of the day: Acceptance.Positive reframing – looking for the positives anywhere you can, perhaps by looking at what has been done rather than what hasn’t.Humour. In contrast, people who frequently used the following five common techniques felt worse at the end of the day:

50 Ways to Get Your Life in Order This is an article by guest writer Mark Foo, author of The 77 Traits of Highly Successful People. There’s nothing wrong with a little bit of chaos in your life. As Albert Einstein once stated, “Three rules of work: out of clutter find simplicity, from discord find harmony, in the middle of difficulty lies opportunity.” Unexpected challenges are what make us stronger, so don’t avoid them. Keep in mind the following 50 tips and you’ll be able to streamline your life and get back on track in the New Year. Recycle old papers that are filling drawers in your house. Do you have a tip to help us get our lives in order?

5 Failures You Need to Experience If You Want to Succeed In Life If you are too afraid of failure, you can’t possibly do what needs to be done to be successful. I fail far more than you might assume, especially given the fact that I’ve written hundreds of articles, coached thousands of people, and even written a book on forming productive habits, being mindful, and finding contentment despite our struggles. I fail at all of those things sometimes, and it feels just as dreadful for me as it does for anybody else. I come down hard on myself, feel guilty, try to avoid thinking about it, and would rather hide my failures from everyone I know. Yes, failing hurts! I still fail at getting to the gym sometimes, but I keep trying. I fail at being loving and compassionate to myself sometimes. I fail at being a patient and present dad and husband, especially when life gets busy. I’ve made three attempts at writing the article you’re reading now, and scrapped it entirely the first two times because it didn’t feel right. 1. Life is full of screw-ups. 2. 3. 4. 5.