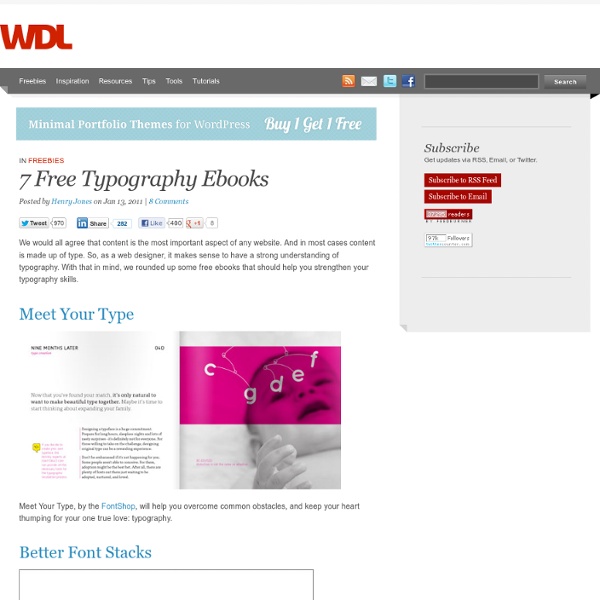 We would all agree that content is the most important aspect of any website. And in most cases content is made up of type. So, as a web designer, it makes sense to have a strong understanding of typography. With that in mind, we rounded up some free ebooks that should help you strengthen your typography skills. Meet Your Type Meet Your Type, by the FontShop, will help you overcome common obstacles, and keep your heart thumping for your one true love: typography. Better Font Stacks A comprehensive comparison of various font stacks. The Typographer’s Glossary The Typographer’s Glossary, by the FontShop, is a glossary of typography related terms. The Elements of Typographic Style Applied to the Web In order to allay some of the myths surrounding typography on the web, this ebook is structured to step through the principles found in Robert Bringhurst’s The Elements of Typographic Style, explaining how to accomplish each using techniques available in HTML and CSS. Type Classification About the Author

A Crash Course in Typography: The Basics of Type - Noupe Design Blog Mar 28 2011 Typography could be considered the most important part of any design. It’s definitely among the most important elements of any design project. And yet it’s often the part of a design that’s left for last, or barely considered at all. Designers are often intimidated by typography, which can result in bland typographical design or a designer always using one or two “reliable” typefaces in their designs. This series aims to change that. In this part, we’ll talk about the basics of typographic theory, including the different kinds of typefaces (and how typefaces and fonts differ), as well as the basic anatomy of a typeface. Typefaces vs. A lot of people use the terms “typeface” and “font” interchangeably. A typeface is a set of typographical symbols and characters. When most of us talk about “fonts”, we’re really talking about typefaces, or type families (which are groups of typefaces with related designs). Classifying Type Serif Sans-Serif Script Display Proportional vs. Mood (ik)

Sci-fi 'gothic' architecture brought to life Swiss architect has built fantastical form using "subdivision algorithm"Column is composed of 16 million faces generated by computerComputational architecture increasingly key to architectural practice London, England (CNN) -- It looks like an architectural fantasy from a world far in the future, but Michael Hansmeyer's complex column design is so real you can touch it. His work is composed of sixteen million faces and made from 2,700 layers of cardboard. It is the result of a cutting-edge computational process and people's responses to it are just as improbable. "Some people say it looks like a reptile, some people think it looks like an underwater creature and other people bring up the Gothic," said Hansmeyer, an architect and computer scientist based at the Swiss Federal Institute of Technology in Zurich. To make the design reality, laser cutters sliced the design out of 2,700 individual layers of 1mm-thick cardboard sheets. He is busy creating a forest of similar Gothic-style columns.

The Perfect 2 Column Liquid Layout (double page): No CSS hacks. SEO friendly. iPhone compatible. Percentage dimensions of the double page layout All the dimensions are in percentage widths so the layout adjusts to any screen resolution. Vertical dimensions are not set so they stretch to the height of the content. Maximum column content widths To prevent wide content (like long URLs) from destroying the layout (long content can make the page scroll horizontally) the column content divs are set to overflow:hidden. 800 x 600 Left & right columns: 357 pixels 1024 x 768 Left & right columns: 459 pixels The nested div structure I've colour coded each div so it's easy to see: The header, colmask and footer divs are 100% wide and stacked vertically one after the other. No CSS hacks The CSS used for this layout is 100% valid and hack free. SEO friendly The higher up content is in your page code, the more important it is considered by search engine algorithms (see my article on link source ordering for more details on how this affects links). Full length column background colours No Images No JavaScript

How to Identify a Font What is the font used for the title of Friends? How about the typeface of that old copy of Moby Dick you picked up at that garage sale? The back of your Starbucks pastry bag? And please tell me, how can you find the font on a worn out birthday card that your client wants you to replicate? Graphic designers are consistently asked to use a client’s nameless favorite font. Thanks to the typeface renaissance spurred by increasingly fantastic font tools and talented foundries, the font identification game is getting harder by the minute. Thankfully, the font culture boom has also spurred some excellent solutions to solve the identification problem it has created. Internet identification tools,Exhaustive print catalogs,Or the crowd-sourced expertise of the Internet’s font lovers. Identification Tools These web-based identification trees should be your first recourse in finding the name of a font. The most popular image-based font finder is MyFonts’ playfully named What The Font! Books 925 shares

Desktop and @font-face fonts The 3D Type Book: A One-of-a-Kind Typographic Treasure - Maria Popova - Life The most comprehensive book of three-dimensional letterforms ever helps us understand the expressive power of objects After months of anticipation, The 3D Type Book by London-based design studio FL@33 is finally here. Dubbed "the most comprehensive showcase of three-dimensional letterforms ever written," the book is nothing short of stellar: With more than 1,300 images by over 160 emerging artists and iconic designers alike, it spans an incredible spectrum of eras, styles, and mediums. From icons like Milton Glaser and Alvin Lustig to contemporary Brain Pickings favorites like Stefan Sagmeister, Marian Bantjes, Ji Lee, Stefan G. Bucher, and Marion Bataille, it's a trove of typographic treasures. The 3D Type Book by FL@33 from Tomi Vollauschek on Vimeo. For a fine companion to The 3D Type Book, don't forget David Sacks's excellent Alphabets. This post also appears on Brain Pickings.Images: FL@33

60+ Really awesome Typography Showcases | tripwire magazine We all know it – “A picture is worth a thousand words“. This is certainly true in most cases but clever use of typography can also turn words into pictures and then interesting things start to happen. Some people experiment with the idea of turning typography into art and pictures and I believe the results can be very interesting and inspiring. In particular this type of art is commonly seen on posters, in logos, on walls (graffiti), etc. Sit back and enjoy the Experimental Typography I discovered on Flickr today. Advertisement Tagged as: CSS Techniques, Inspiration, Typography

TypeOff. Celebrating Linotype, 125 Years Since Its Debut - John Hendel - Technology Around for a century, Linotype machines were made obsolete in the 1970s by changing technologies -- but they have not been forgotten To embark on Linotype was to embark on greatness. Linotype machines powered newspapers, factories, a whole industry that was as American as any and existed for a century, at least until the tides of technology wiped it out as an occupation in the 1960s and 1970s -- and now, Linotype is nearly extinguished from American memory. Yet Thomas Edison, it's said, called the machine the Eighth Wonder of the World (no faint praise from the man who invented the light bulb). This fabled technology, this wonder, once occupied the imagination of countless people in our nation's past. The summer of 2011 marks 125 years since the Linotype machine's innovation entered the newspaper world -- the New York Tribune first integrated the machine into its operations in July 1886. The Mechanism of the Linotype Full Screen Please use a JavaScript-enabled device to view this slideshow