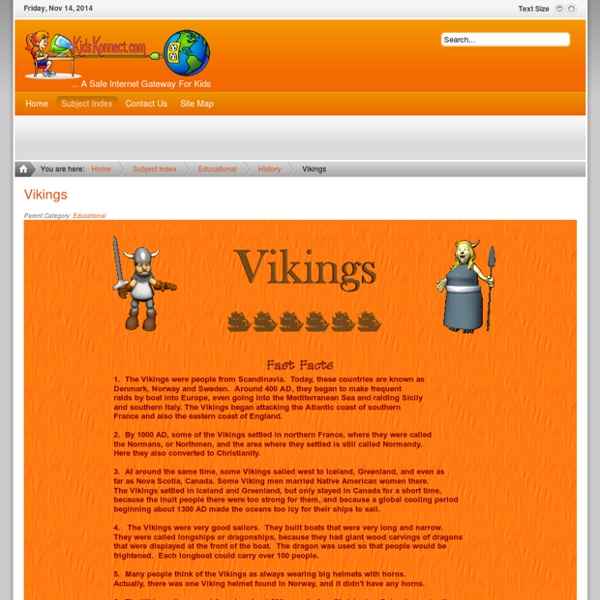 Primary History - World War 2 - Children at war Facts About Viking Food, Farming and Feasts The Vikings are best known as brave and fearsome invaders and warriors, but they were also able farmers and fishermen. Here are some facts about the types of farming and fishing the Vikings relied upon, the foods they would have eaten and their meal time practices and customs. What did the Vikings farm? The Vikings both grew crops and kept animals.The best farmland in the Viking world was located in Denmark and parts of Sweden. How did Viking Fishermen Catch Fish? Viking fishermen used both nets and barbed hooks to catch fish.They caught freshwater fish (such as trout and eels) in the lakes of Europe and herring and cod in the Baltic Sea, the North Sea and the North Atlantic Ocean.Fish formed a major part of a Viking’s diet. What Types of Food Did the Vikings Eat? How Did the Vikings Prepare and Eat Their Food? Click here to check out more of our resources on The Vikings.

Vikings Homework Help Where did the Vikings settle in Britain? The area eventually settled by Vikings was called the Danelaw. It formed a boundary separating Anglo-Saxon England from Viking England and was defined in a treaty between the English King Alfred and Viking King Guthrum in AD 880. It lay north of Watling Street, a Roman road running from London north-west to Chester and covered northern and eastern England. It included counties north of an imaginary line running from London to Bedford and then up to Chester. The Vikings settled in: Islands off the coast of Scotland - Shetland, Orkney and The Hebrides Around the north and north west coast of Scotland Parts of Ireland - Dublin is a Viking city The Isle of Man Small parts of Wales Parts of England known as Danelaw Place Names We can tell where the Vikings settled by place names of towns and villages today. Place names ending in –by eg. Derby - A village where deer are found Place names ending in –thorpe (or -thorp, -throp or –trop) eg. Viking Words