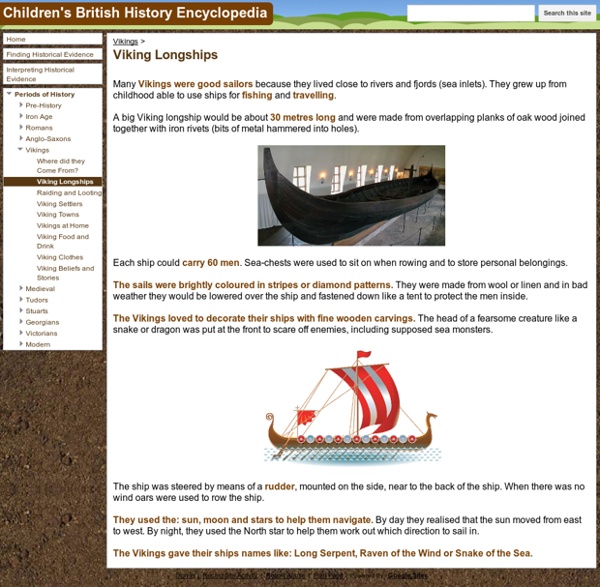 Many Vikings were good sailors because they lived close to rivers and fjords (sea inlets). They grew up from childhood able to use ships for fishing and travelling. A big Viking longship would be about 30 metres long and were made from overlapping planks of oak wood joined together with iron rivets (bits of metal hammered into holes). Each ship could carry 60 men. The sails were brightly coloured in stripes or diamond patterns. The Vikings loved to decorate their ships with fine wooden carvings. The ship was steered by means of a rudder, mounted on the side, near to the back of the ship. They used the: sun, moon and stars to help them navigate. The Vikings gave their ships names like: Long Serpent, Raven of the Wind or Snake of the Sea.

Primary History - Vikings Primary History - Vikings - Beliefs and stories Vikings Homework Help Where did the Vikings settle in Britain? The area eventually settled by Vikings was called the Danelaw. It formed a boundary separating Anglo-Saxon England from Viking England and was defined in a treaty between the English King Alfred and Viking King Guthrum in AD 880. It lay north of Watling Street, a Roman road running from London north-west to Chester and covered northern and eastern England. The Vikings settled in: Islands off the coast of Scotland - Shetland, Orkney and The Hebrides Around the north and north west coast of Scotland Parts of Ireland - Dublin is a Viking city The Isle of Man Small parts of Wales Parts of England known as Danelaw Place Names We can tell where the Vikings settled by place names of towns and villages today. Place names ending in –by eg. Derby - A village where deer are found Place names ending in –thorpe (or -thorp, -throp or –trop) eg. Place names ending in –toft or-tofts. Viking Words

Viking gods Odin Odin was the chief god in the Norse mythology, and the father of Thor, Balder, Hoder, Tyr, Bragi, Heimdall, Ull, Vidar, Hermod and Vali. His wives were Fjorgyn, Frigga and Rind. He had a bad habit to roam around Midgard in human disguise seducing and impregnating women. Thor Thor was the son of Odin and Fjorgyn. thunder, the sky, fertility and the law. Loki Loki can be called the 'wizard of lies' and is in many ways the most interesting god in Asgard. Frey Frey was a fertility god of the the Vanir race. Freya Freya was the goddess of sex and later also war and death. Idun The goddess of spring and immortal youth was called Idun. Sif Sif was the goddess who married Thor and bore his stepson (by Odin), Ull. Hel Hel was a goddess (or a monster), a daughter of Loki and Angrboda, who ruled over Niflheim, which was the land of the dead.

Vikings - Gods and Goddesses - Britons, Gaels, Picts, Angles and Vikings The Vikings believed in giant gods and goddesses who ordered the world around them. Warriors who died gloriously in battle could expect to feast with the gods in Valhalla, the mighty hall of the slain. The Valkyries, warrior maidens, would fill their drinking horns with mead. The greatest Viking god was Odin, god of war, poetry and wisdom. He was also known as: ‘The One-Eyed’ because he exchanged one eye for the gift of knowledge and wisdom‘The All-Knowing’, because his two ravens (Huginn and Muninn - ‘Thought’ and ‘Memory’) flew over the earth by day and brought Odin news each night‘The Lord of the Gallows’, because Odin had the power to make hanged men reveal their secrets after death. One of Odin’s sons was Thor, god of thunder, storms and winds - vital to Viking crews who prayed to him before their voyages, even after becoming Christians. Odin’s wife was Frigga, goddess of married love and the family hearth. Vikings sometimes wore symbols of their gods and goddesses.

Viking culture, people and history The Vikings have had a well-defined public image for centuries, and have even become a staple of comic book illustrations with colorful images of horned helmets, berserkers, longships, Valhalla, the one-eyed god Odin and men dying sword in hand or drinking out of skulls. The Vikings were pirates who came to plunder and kill, and they spread terror along Europe's coasts. But their posthumous reputation is not entirely fair: They were not just ruthless warriors, but also skilled traders, administrators and craftsmen in metal and wood, producing beautiful jewellery and artefacts that survive to this day. Longships In medieval Norway the basis for agriculture was poor. This resulted in voyages of discovery, trade and opportunistic raiding of coastal cities, towns and settlements across Europe. Viking courage How did such a small and scattered people conquer so much territory? Viking courage is probably also linked to their dark sense of humour, as expressed in the writing of their sagas.

10 Things You May Not Know About the Vikings — HISTORY Lists Think you’ve got the Vikings pegged? With all the caricatures and stereotypes out there, there’s probably a lot you’ve never heard about the seafaring Scandinavians who raided and settled coastal sites in the British Isles and beyond between the ninth and 11th centuries. Explore 10 surprising facts about the Vikings below. Ted Spiegel/National Geographic/Getty Images 1. 2. 3. 4. 5. 6. 7. 8. 9. 10. Viking Gods | Vikings History In Norse mythology, the Viking gods, or Norse gods, are originally two groups of gods. One group is called Aesir and the second group is called Vanir. Vanir were considered wise and skilled in magical arts. They were usually worshiped in connection with prosperity and the harvest from the earth. In contrast Aesir were worshiped in connection with war and victory. In ancient times Vanir and Aesir waged war on each other. Anyway they did make peace on the condition of prisoner exchange. Odin was the highest ranking god.Thor son of Odin and Iord.Balder, son of Odin and Frigg.Niord (Njordur, of the race of Vanir, but not Aesir)Freyr, son of NjordurTyr, son of OdinHeimdall, son of Odin (and nine sisters who were all his mother!) Return from Viking Gods to Vikings History