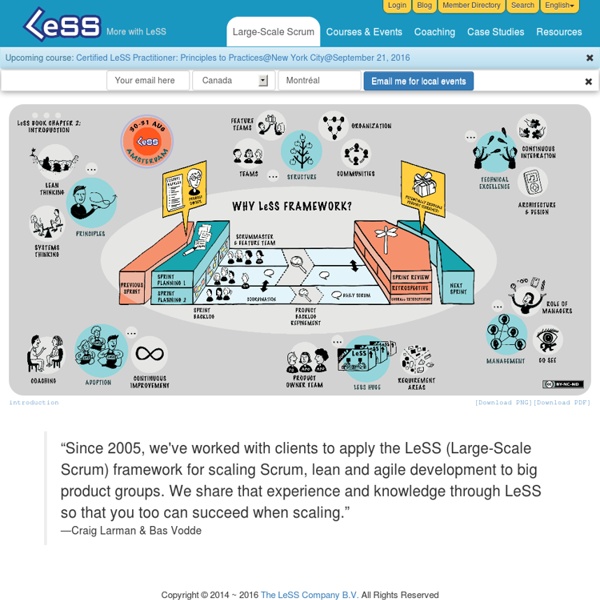 Nexus Framework What is Nexus? Nexus is a framework that drives to the heart of scaling: cross-team dependencies and integration issues. It is an exoskeleton that rests on top of multiple Scrum Teams who work together to create an Integrated Increment. User Stories and User Story Examples by Mike Cohn What is a user story? User stories are short, simple descriptions of a feature told from the perspective of the person who desires the new capability, usually a user or customer of the system. They typically follow a simple template: As a < type of user >, I want < some goal > so that < some reason >. Do Better Scrum (Repaso general optativo) An unofficial set of tips and insights into how to implement Scrum well free for download in various languages. Written by Certified Scrum Coach & Trainer Peter Hundermark. Version 3 Download the brand new third edition of our booklet at InfoQ in PDF, ePub and MOBI format. Feedback is welcomed.

Principles behind the Agile Manifesto We follow these principles: Our highest priority is to satisfy the customer through early and continuous delivery of valuable software. Welcome changing requirements, even late in development. Winston W. Royce From a talk Royce gave on August 10, 1990 Winston Walker Royce (August 15, 1929 – June 7, 1995) was an American computer scientist, director at Lockheed Software Technology Center in Austin, Texas. He was a pioneer in the field of software development,[1] known for his 1970 paper from which the Waterfall model for software development was mistakenly[2] drawn.[3] Biography[edit]

The Burn-Down Chart: An Effective Planning and Tracking Tool Burn-downs charts are among the most common sprint tracking mechanisms used by Agile practitioners. Though their application and usage varies (some plot a burn-down chart using story points, whereas others use task count), plotting burn-down using effort remaining is the most effective and efficient way of using burn-down charts. This article looks at creating and updating a burn-down chart using the effort-remaining approach, interpreting burn-down under different scenarios, and examining common mistakes to avoid while using burn-downs. Scrum Role Playing Scrum is very explicit in its clarification of roles and responsibilities. Scrum has only three roles; together they cover the responsibilities needed to ensure a successful project. The Product Owner represents the customer and sets the vision, goals and priorities of the project.

About Self Organizing Teams/ Posted 4/11/2016 12:05:46 PM by CLEMENTINO DE MENDONCA, Professional Scrum Trainer with Scrum.org A question from a budding Scrum Master, who is transitioning from a background as a traditional project manager: “In order to promote team bonding and self-organization, from now on I am going to try something new with the team. In the sprint planning meeting, instead of me breaking down the tasks for user stories between each team member, I am going to just identify tasks and hours needed and leave it at that, and then I will ask each team member to “pick” tasks from the sprint backlog on their own, and later, as soon as they complete a previously picked task.” He goes on to say: “The behavior I want to encourage is the following: 1. Agile Story Card Templates - SolutionsIQ Help Drive Consistency Simplicity – maximizing the amount of work not done – is an essential aspect of achieving organizational agility, and also happens to be one of the twelve Agile Principles behind the Agile Manifesto. A quick way to make your team’s space a little more simple is by having consistent looking Story Cards up on the wall.

Agile Project Management Handbook v2.0 In today’s ever-changing world, organisations and businesses are keen to adopt a more flexible approach to delivering projects, and want to become more agile. However, for organisations delivering projects and programmes, and where existing formal project management processes already exist, the informality of many of the agile approaches is daunting and is sometimes perceived as too risky. These project-focused organisations need a mature agile approach – agility within the concept of project delivery – Agile Project Management. 5 Common Mistakes We Make Writing User Stories Most of the issues with gathering requirements in agile software development and agile testing derive from issues with User Stories. Somehow expressing requirements in such a simple form causes a lot of trouble to agile teams. Of course art of writing good User Stories is the most difficult for new teams starting with a new agile project or these, which freshly transformed development methods to agile software development methodologies. Mistakes made at that point lead to wrong Test Cases, wrong understanding of requirements, and the worst of all wrong implementation which can be direct cause of rejecting the deliverables of the iteration.