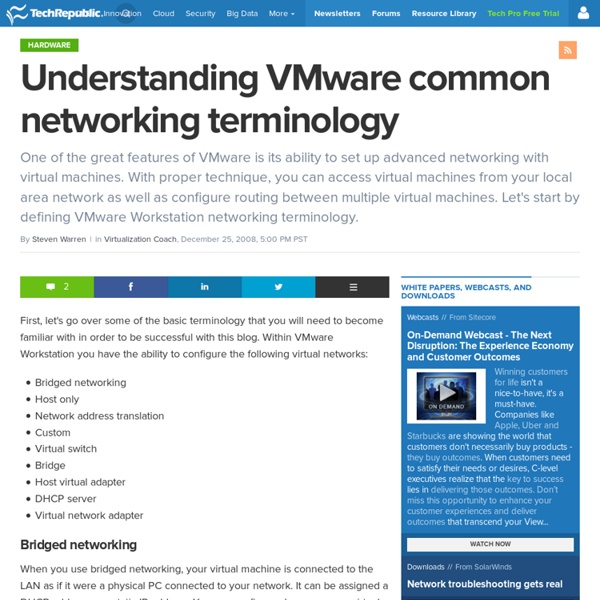 First, let's go over some of the basic terminology that you will need to become familiar with in order to be successful with this blog. Within VMware Workstation you have the ability to configure the following virtual networks: Bridged networkingHost onlyNetwork address translationCustomVirtual switchBridgeHost virtual adapterDHCP serverVirtual network adapter Bridged networking When you use bridged networking, your virtual machine is connected to the LAN as if it were a physical PC connected to your network. It can be assigned a DHCP address or a static IP address. Host only When you use a host-only network, your virtual machines can communicate with the host PC only. Network address translation Any virtual machine that you create will share the IP and MAC address of the host. Custom A custom network allows you to customize your virtual network to suit your individual needs. Virtual switch A virtual switch has the same definition and functionality as a physical switch. Bridge DHCP server

How to Create a Virtual Networks by Using VMware Workstation Edit Article Questions and Answers VMware Workstation is very useful software, using in developing and testing a system which run in a real network. I will give you an example, showing how to create sophisticated virtual networks in VMware Workstation ,which can be used to test database server system. In this example, a database server connects through a firewall to an external network. 5 questions about VMware's new virtual networking platform VMware made news this week, announcing that technology it acquired from virtual networking company Nicira last year will be integrated into the company's existing networking technology. VMware is merging the networking and security product line from vCloud with the Nicira Network Virtualization Platform (NVP), which it purchased last year for $1.2 billion. The new product family will be dubbed VMware NSX, and is meant to bring virtual networking technology to the masses when it is released in the third quarter of this year. [ HAPPY PI DAY! 10 awesome ways to celebrate Pi Day 2013 ] Martin Casado

Virtual switch explained VMware has designed the vSphere suite to mimic the functions of a physical network, so a lot of the network hardware you’ll find in the real world, you will also find virtualized in vSphere. Virtual switches work very much like their physical counterparts, Ethernet switches, but lack some of their advanced functionality. They are used to establish a connection between the virtual and the physical network. A virtual switch can detect which virtual machines are logically connected to each of its virtual ports and use that information to forward traffic to the correct virtual machines. A virtual switch is connected to physical switches by using physical Ethernet adapters to join virtual networks with physical networks.

Configuring a Virtual Network Features | Documentation | Knowledge Base | Discussion Forums Prev Contents Last Next The first topics in this section give you a quick look at the virtual networking components that VMware Workstation provides and show how you can use them with your virtual machine. The rest of the section provides more detail on some networking capabilities and specialized configurations. Understanding the Different Network Types in VMware and VirtualBox - Intense School One of the areas less understood by people learning to use virtualization software such as VMware, VirtualBox, etc., is that of virtualized networking. For example, how can you connect your guest OS to the Internet connection available on the host OS? In this article, we will discuss the various network types available for virtual machines and see how each type can be used. VMware Training – Resources (Intense)

Using VMware: Understanding the Virtual Switch Introduction In this article we will explore the VMware ‘Virtual Switch’. The Virtual Switch is nothing more than a logical switching fabric built into your VMware infrastructure (ESX) so that you can network your Virtual Machines (VMs) however you need them. In the following sections we will cover the basics of the Virtual Switch, terminology used, its use, configuration and management.

VMware ESX network redundancy via Fibre Channel multipathing VMware ESX has built-in support for Fibre Channel multipathing, which enables network redundancy. There are several... By submitting your email address, you agree to receive emails regarding relevant topic offers from TechTarget and its partners. You can withdraw your consent at any time. Contact TechTarget at 275 Grove Street, Newton, MA. You also agree that your personal information may be transferred and processed in the United States, and that you have read and agree to the Terms of Use and the Privacy Policy.

VMware Storage and Software-defined Storage (SDS) Solutions Blog Posts Oregon State University, a public institution with more than 26,000 students and growing VDI workloads wanted a high performance storage tier for their VDI environment. However, they wanted the solution to be up and running before the school summer session began, along with being easy to operate and scale on an on-going basis, without requiring large upfront investments. Continue reading VMware Workstation Networking Basics VMware Workstation provides several ways you can configure a virtual machine for virtual networking. Bridged networking configures your virtual machine as a unique identity on the network, separate and unrelated to its host.Network address translation (NAT) configures your virtual machine to share the IP and MAC addresses of the host. The virtual machine and the host share a single network identity that is not visible outside the network. NAT can be useful when you are allowed a single IP address or MAC address by your network administrator. You might also use NAT to configure separate virtual machines for handling http and ftp requests, with both virtual machines running off the same IP address or domain.Host-only networking configures your virtual machine to allow network access only to the host.