World War One - What is a Trench? 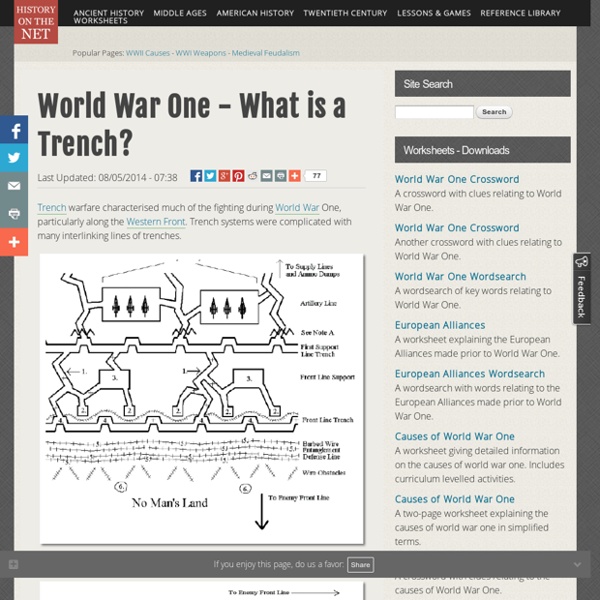 Trench warfare characterised much of the fighting during World War One, particularly along the Western Front. Trench systems were complicated with many interlinking lines of trenches. Front Line Trench Cross Section Artillery Line The artillery line was where the big field guns were located. They were used to fire shells at the enemy. Communication Trench The communication trenches were used to move between the front and rear trenches. Support Trenches The support trenches provided a second line of defense in case the front line trench was taken by the enemy. Bunker The underground bunkers were used to store food, weapons and artillery. Traverse Trenches were not built in straight lines. Machine Gun Nest The machine gun nest was where the machine guns were located. Front Line Trench The front line trenches were generally about 8 feet deep and between 4 and 6 feet wide. Barbed Wire Barbed wire was used extensively in the trench warfare of world war one. Listening Post No Man's Land Sandbags Parapet

The Causes and Effects That Led to World War I Sep 22, 2014 100 summers ago the countries of Europe collapsed quickly into war: it was sudden but also strangely inevitable. Countless books have been written since about the causes of The Great War, but in this video essay, delve.tv offers an alternative history. By tracing the story backwards in time, they stumble upon a very unexpected cause and discover that sometimes the most harmless of things can have terrible consequences. Story Design & Direction: Adam Westbrook Additional Photography: Brett Walsh Animation: Adam Westbrook

Academy of American Poets Do not go gentle into that good night,Old age should burn and rave at close of day;Rage, rage against the dying of the light. Though wise men at their end know dark is right,Because their words had forked no lightning theyDo not go gentle into that good night. Good men, the last wave by, crying how brightTheir frail deeds might have danced in a green bay,Rage, rage against the dying of the light. Wild men who caught and sang the sun in flight,And learn, too late, they grieved it on its way,Do not go gentle into that good night. U.S. enters World War I — History.com This Day in History — 4/6/1917 Apr 6, 1917: On April 6, 1917, two days after the U.S. Senate votes 82 to 6 to declare war against Germany, the U.S. House of Representatives endorses the decision by a vote of 373 to 50, and the United States formally enters the First World War. When World War I erupted in 1914, President Woodrow Wilson pledged neutrality for the United States, a position favored by the vast majority of Americans.

First World War Origins The First World War was caused by the destabilisation of the balance of power in Europe due to the rise of Germany. The war began in 1914 when Austria-Hungary invaded Serbia because of the assassination of an archduke. War Poetry: Ted Hughes: 'Bayonet Charge' I have already said my piece about the AQA GCSE poetry syllabus and what it calls the 'Conflict' cluster. (I take 'cluster' to be the AQA's decorous abbreviation of a more accurate military term which, alas, cannot be used on a family-friendly blog.) Now I will do my best to help those unfortunates brought to this site in search of information about one particular poem: Ted Hughes's 'Bayonet Charge'. What follows is a set of loose notes.

Christmas Truce of 1914 - World War I Starting on Christmas Eve, many German and British troops sang Christmas carols to each other across the lines, and at certain points the Allied soldiers even heard brass bands joining the Germans in their joyous singing. At the first light of dawn on Christmas Day, some German soldiers emerged from their trenches and approached the Allied lines across no-man’s-land, calling out “Merry Christmas” in their enemies’ native tongues. At first, the Allied soldiers feared it was a trick, but seeing the Germans unarmed they climbed out of their trenches and shook hands with the enemy soldiers. The men exchanged presents of cigarettes and plum puddings and sang carols and songs.