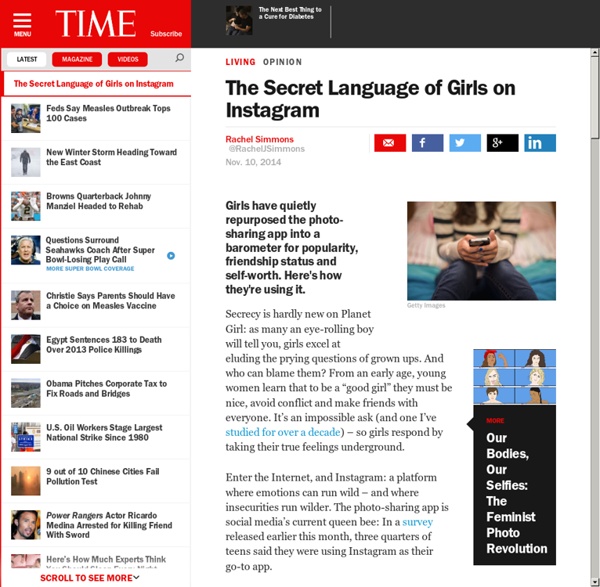 Related:  Digital citizenship • anything and everything. research part 1.

'Sexting' now banned in Victoria Changes in the law apply from Monday in Victoria. Photo: Glenn Hunt So-called "sexting" without consent is now an offence in Victoria. From Monday, anyone who maliciously or deliberately spreads intimate images of another person - or threatens to do so - faces prosecution under two new offences. The ban applies to intimate images of anyone under the age of 18 as well as images of adults without their consent. Those who illegally spread such images can be jailed for up to two years. Those who threaten to distribute them can be jailed for up to one year. The new laws also introduce exceptions to child pornography offences so those under 18 will not be prosecuted or placed on the sex offenders' register for consensual, non-exploitative sexting. Attorney-General Robert Clark said it was important the law kept up with changing technology. A Victoria parliamentary committee had recommended the changes last year.

Bethenny Frankel to businesswomen: “Just be better than men” Bethenny Frankel first caught the public’s eye during her stint on Bravo’s ”CMCSA” Real Housewives of New York. Like many of her reality TV peers, she used that platform to build a brand. But unlike those peers, she was able to sell her company for a pretty penny. Fortune Brands’ Beam Global Spirits & Wine bought Skinnygirl, which sells low calorie cocktails in sleek bottles, for a reported $100 million in 2011. Apparently, though, her advice to find that sort of success varies greatly from Facebook COO Sheryl Sandberg’s more polished advice in her best-selling career book Lean In. Titled “A Night of Empowering Conversations,” the event featured a panel of female entrepreneurs including Frankel, MAKERS creator Dyllan McGee and Gilt co-founder and GlamSquad CEO Alexandra Wilkis Wilson. “Just be better than men,” Frankel continued. The other two panelists and roughly 400 attendees applauded Frankel as she told women to stop competing with men and simply be in a league of their own.

Give Yourself 5 Stars? Online, It Might Cost You New York regulators will announce on Monday the most comprehensive crackdown to date on deceptive reviews on the Internet. Agreements have been reached with 19 companies to cease their misleading practices and pay a total of $350,000 in penalties. The yearlong investigation encompassed companies that create fake reviews as well as the clients that buy them. Among those signing the agreements are a charter bus operator, a teeth-whitening service, a laser hair-removal chain and an adult entertainment club. A phony review of a restaurant may lead to a bad meal, which is disappointing. “What we’ve found is even worse than old-fashioned false advertising,” said , the New York attorney general. Investigators working for Mr. All too often the answer was yes. In some cases, the reputation shops bribed their clients’ customers to write more fake reviews, giving them $50 gift certificates for their trouble. Within recent memory, reviewing was something professionals did. Neither Mr.

What Your Students Really Need to Know About Digital Citizenship In my classroom, I use two essential approaches in the digital citizenship curriculum that I teach: proactive knowledge and experiential knowledge. Proactive Knowledge I want my students to know the “9 Key Ps” of digital citizenship. While I go into these Ps in detail in my book Reinventing Writing, here are the basics: 1. Passwords: Do students know how to create a secure password? 2. 3. 4. 5. 6. 7. 8. 9. Experiential Knowledge During the year, I touch on each of the points above with lessons and class discussions, but just talking is not enough. Truth or fiction: To protect us from disease, we are inoculated with dead viruses and germs. Turn students into teachers: You can have students create tutorials or presentations exposing common scams and how people can protect themselves. Collaborative learning communities: For the most powerful learning experiences, students should participate in collaborative learning (like the experiences shared in Flattening Classrooms, Engaging Minds).

Oil prices likely to fall further, says IEA 14 November 2014Last updated at 07:13 ET Oil prices are likely to continue falling well into 2015, the International Energy Agency has said. The IEA, a consultancy to 29 countries, said weak demand and the US shale gas boom meant crude's recent fall below $80 a barrel was not over. On Friday, Brent crude, one of the major price benchmarks, traded at $78.13 a barrel, near a four-year low. "It is increasingly clear that we have begun a new chapter in the history of the oil markets," the IEA said. "Barring any new supply problems, downward price pressures could build further in the first half of 2015." Continue reading the main story The organisation, set up after the "oil shock" of the early 1970s to advise major oil importing countries, said that pressure was building on the Opec oil producers' group to restrict supply to bolster prices. However, there have been reports that Saudi Arabia, Opec's key member, is not yet willing to turn off the taps.

How Technology Could Help Fight Income Inequality Photo Economic View By TYLER COWEN Rising income inequality has set off fierce political and economic debates, but one important angle hasn’t been explored adequately. Technology has contributed to the rise in inequality, but there are also some significant ways in which technology could reduce it. For example, while computers have improved our lives in many ways, they haven’t yet done much to make health care and education cheaper. It is a bit harder to see how information technology can lower housing costs, but perhaps the sharing economy can make it easier to live in much smaller spaces and rent needed items, rather than store them in a house or apartment. Another set of future gains, especially for lesser-skilled workers, may come as computers become easier to handle for people with rudimentary skill. This particular type of inequality may very well change. A more universal expertise with information technology also might reverse some of the income inequalities that stem from finance.

Anti-Bullying and Cybersafety St Michael’s Catholic Parish Primary School does not tolerate bullying in any form. Guided by our leadership team, all members of the school community are committed to ensuring a safe and caring environment, which promotes positive self esteem and personal growth intellectually, physically, socially, emotionally, aesthetically and morally. All students are encouraged to be responsible users of technology and each year students and parents are reminded about the importance of Cybersafety. Our Anti-Bullying policy and procedures have been developed with reference to Path to Life, A Framework for Pastoral Care and Wellbeing for Systemic Catholic schools in the Diocese of Wollongong, the Student Anti-Bullying Policy for Systemic Catholic schools in the Diocese of Wollongong, St Michael’s Positive Behaviour Policy, Pastoral Care Policy and Responsible Use of Technology Policy. Dim lights

House sales reach seven year high as prices climb another £2,000 in October | Daily Mail Online Uplift in activity outside London drives the number of completed property sales to seven-year highHouse prices climbed 0.7% (or £2,026) in OctoberAverage value of UK properties has increased by £26,500 or 10.5 per cent in 12 months By Jane Denton For Thisismoney Published: 10:22 GMT, 14 November 2014 | Updated: 11:22 GMT, 14 November 2014 The property market is shrugging off the recent slowdown with the number of completed house sales rising to their highest level for seven years, new figures suggest. House prices climbed another 0.7 per cent - or £2,026 - last month, with the average price of a home in England and Wales now hitting £277,390, LSL Property Services found. Prices at the top end of the London market continue to fall, as already sky-high prices start to show signs of deterring buyers. Shrugging of the slowdown: Last month saw the number of completed house sales in the UK reach a seven year high, LSL Property Services says. Where are people buying? Where are people buying?

LiveBinders - 21st Century TIPS LiveBinders, simply put, is a 3-ring binder for the web. It's a free web-based service that allows you to create virtual binders on any topic using a variety of media such as video, PDFs, web pages, text, and images. Although the service has been around for a few years, it's popularity has really taken off as improvements have been made in the interface along with the ability to collaboratively edit and embed a binder into a web-page. For an example of an embedded binder, please check out the 21st Century Skills binder on this site. You can not only create binders, but you can organize them too by creating shelves, which is a new feature. One of my favorite things to do is search through LiveBinders to see what other educators have created and then add it to one of my shelves. Tutorial on how to create shelves and save / organize binders to shelves. Why Use LiveBinders? How to Use LiveBinders in the Classroom? Suggestions for integration: Teacher-Centered Ideas

Teens Using Apple Airdrop Instead Of Snapchat And Instagram - Business Insider Where Do The Converted Find Their Fervour? The Different 'Selling Points' Of Faiths Throughout November, The Huffington Post UK is featuring its Beyond Belief series, chronicling the remarkable lives of Britons who've taken on their faith to create a force for change. Picture a typical religious convert and you are likely to conjure up a zealous American-style preacher, or the ginger-bearded jihadi fronting recruitment videos for Islamic State in Syria. The phrase "the fervour of the converted" is common parlance, giving the impression that converts are attracted to extreme aspects of faith. But detailed research has shown that the most common religious converts are actually young, educated women. According to experts, religions have different "selling points", characteristics that a person might seek out: new Christians tend to be seeking salvation, Muslim converts look for discipline, Buddhist adoptees are drawn to the spirituality of the faith, and Jewish converts are attracted to the strength of community. Rabbi Jonathan Romain: The Conversion Merry-Go-Round

Related:
Related:  Digital citizenship   -  anything and everything. research part 1.