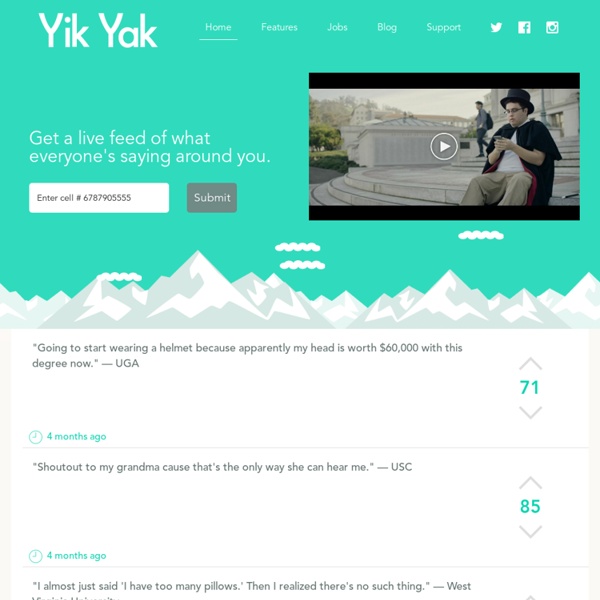 Virtual tour of Venice Italy - History, facts, top attractions & things to do Few cities can claim such a priceless art and history heritage as Venice. This unique city with its magical, spectacular scenery is not just beautiful; it is a real miracle of creative genius: a city built on mud, sand and the slime of a difficult, inhospitable landscape. Venice is the symbol of wise government and freedom. What surprises about Venice, now as in the past, is its impressive building structure - a city built entirely on water. From the very start, building the city was a real engineering miracle due not only to the skill and intelligence of its builders but also to the nature of the place itself.

Yik Yak is the hottest messaging app. So how are Brits using it? | Technology Are you yakking yet? No, not a reference to throwing up as part of a venomous post-Christmas-party hangover. Yik Yak is the latest messaging app to take US college campuses by storm, and then Silicon Valley. The app, which makes anonymity a key feature, launched in November 2013, had 100,000 users by February 2014, and then raised a startling $61m funding round in November. This, for what its founders describe as “the only way to create a localised social forum without prior relationships or friendships for the purpose of delivering relevant, timely content to hyper-local areas of people”. Or, once it gets into the hands of Brits, one of the many ways to boast about how you’re throwing up as part of a venomous hangover. At least, that’s what using Yik Yak’s “Peek” feature to see what people are yakking about in specific locations threw up when I looked at 10 of the largest cities in the UK, curious to see what Brits were making of the $61m messaging app. And? London Birmingham Leeds Glasgow

Meet Crossroad, A Nifty Little App To Create Collaborative Photo Albums Chances are you recently went back from a wedding, a road trip or any other meaningful social event, and all your friends took a bunch of photos with their phones. And yet, you won’t ever see these photos again, as they will stay in your friend’s camera roll forever. Crossroad is a new app for iOS and Android that lets you create collaborative albums in a few taps. It’s seamless, well-designed and useful in many occasions. “During my stag party, we took a lot of photos. But we didn’t receive all of them after the weekend was over,” co-founder and CEO Mathieu Spiry told me. Here’s how it works. You can quit the app, it will continue uploading your pictures in the background, or you can browse your friends’ photos in the meantime. If you want to make this album public, you can get a web gallery that you can share with people who weren’t at your event. There are two key reasons why Crossroad is intrinsically viral. I first met the Crossroad team at a pitch event in Paris.

Super Teacher Tools Psychology's answer to trolling and online abuse | Chris Chambers | Science Do we each harbour a dark passenger? A malevolent psychopath? A fragile narcissist? Contrary to popular belief, decades of psychological research shows that anyone is capable of aggression, cruelty and violence. The "self" is a murky mixture of light and shade. Lately the dark side seems to be winning. While most of us agree there is a problem, much less has been said about possible solutions. Psychology may hold a big piece of the puzzle. Suler's basic idea was that by masking their identities, abusers not only avoid accountability for their behaviour but also dissociate their online selves from their real-world selves. Many aspects of Suler's theory remain untested, but a recent Israeli study found that people were less likely to issue online threats under their true identity, suggesting that anonymity is one contributing factor. So what can be done to reshape the cognition of an abuser? Cognitive Behavioural Therapy Cognitive Bias Modification Inhibition Training Empathy Training

Pin & Tucker Shopping App Let's Your Friends Vote On What You Should (Or Shouldn't) Buy Remember the days of group texting your girlfriends for some much-needed outfit approval or, in some cases, the red flag of disapproval? Well, now there’s an app for that. Pin and Tucker is the Smartphone app that provides a second opinion on a potential purchase or ensemble option. Naturally I had to test this out and give you guys the scoop. It was only a matter of time before our Smartphones became our shopping buddies — and quite honestly, I am pretty jealous that I hadn’t thought of this application myself. Here's how it works! Step 1: Make A Profile After you've downloaded the app, create your personal profile. 2. What's awesome about this app is while you get outfit advice, you can offer your opinion on someone else's ensemble as well. 3. This step is super important. So, you have three options here. Also, don't forget to provide a brief description of what it is you're looking to purchase. 4. Click that inviting "share" button luring you in above and then the fun can commence.

Zaption - Interact & Learn with Video Lessons Online disinhibition and the psychology of trolling In everyday life, decorum dictates that certain things just don't happen. Funerals, even for divisive figures tend to go by with solemn respect. Compare this with a recent example of online trolling at its most extreme: In 2011, a Reading man was jailed for raiding the Facebook tribute pages of a 14 year old girl who had committed suicide, filling it with crass jokes and insults. He had never met the girl in question. That's an extreme example, but it's a phenomenon almost as old as the internet itself: trolling. Common wisdom dictates that people are more aggressive, rude and forthright online because they're anonymous and can act as unpleasantly as they like without immediate consequence. Psychologist John Suller wrote a paper on this in 2004, entitled "The Online Disinhibition Effect", where he explored six factors that could combine to change people's behaviour online. Although free speech advocates will wince, communities that are well moderated seem to be more civil places.