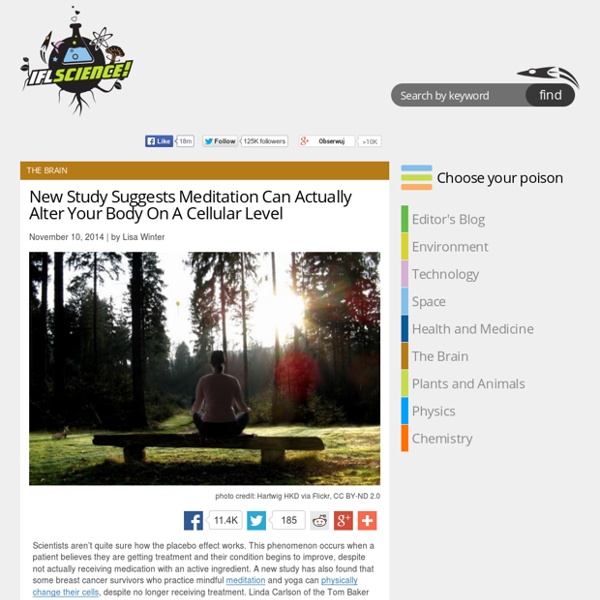 Scientists aren’t quite sure how the placebo effect works. This phenomenon occurs when a patient believes they are getting treatment and their condition begins to improve, despite not actually receiving medication with an active ingredient. A new study has also found that some breast cancer survivors who practice mindful meditation and yoga can physically change their cells, despite no longer receiving treatment. Linda Carlson of the Tom Baker Cancer Centre in Alberta, Canada is lead author on the paper, which was published in the journal Cancer. Their study participants had an average age of 55 and had survived breast cancer at least two years prior, but were still feeling considerable emotional distress. There were 88 participants in all that had been randomly separated into three groups, with blood samples taken before the start of the 12 week study. Telomeres are protective lengths of protein that exist at the ends of chromosomes.

Related:  Mindfullness • Mind Body Synergy • anything and everything. research part 1.

How To Develop The Four Primary Skills Of All Meditation by Paul Cavel Emancipation or freedom from slavery and bondage is ultimately what the human spirit craves. From the perspective of your spirit, slavery encompasses how the attachments in your life—such as sex, material items, money, power and all that they bring—prevent you from being free. Bondage has to do with the ways in which your ego (or collection of identities) and your karmic loops bind you into the reality you experience, and thereby limit your human growth. So the question is: How can you free your spirit and, in so doing, realise your human potential? Making The Body Conscious

Why a walk in the woods really does help your body and your soul Have you ever wondered why you feel healthier and happier when you stroll through the trees or frolic by the sea? Is it just that you’re spending time away from work, de-stressing and taking in the view? Or is there more to it? Scientist Creates Diamonds From Peanut Butter Diamonds are typically created more than 800 kilometers (500 miles) below Earth’s surface when temperatures over 2200 degrees Celsius (4000 degrees Fahrenheit) and pressure 1.3 million times greater than the atmosphere combine and crystallize carbon into the clear white stone we all know. Synthetic diamonds can replicate the process in a few short days, creating diamonds that are less politically-charged for use in jewelry, electronics, manufacturing, and more. Dan Frost of Germany's Bayerisches Geoinstitut has been creating diamonds out of a rather unlikely source of carbon: peanut butter. Frost explained his process to BBC Future’s David Robinson.

10 Amazing Examples of Mind Over Matter While we often think of our bodies and minds as two distinct entities, it turns out they are much more entwined than we might assume. Researchers are continually finding evidence that the brain has a distinct power to manipulate the body’s physiology. As these 10 examples show, the mind/body connection can work in our favor or detriment, depending on our knowledge of a situation and our ability to control our thoughts.

Welcome to the Island Where People Forget to Die And Diseases Like Lung Cancer Mysteriously Disappear One day in 1976, Stamatis Moraitis of Boynton Beach, Florida, felt short of breath. Climbing stairs was a chore; he had to quit working midday. After reviewing his X-rays, his doctor concluded that Moraitis had lung cancer. As he recalls, nine other doctors confirmed the diagnosis. How to communicate like a Buddhist — mindfully and without judgment (iStock) There’s a lot that used to frustrate me about communicating. Well, if I’m honest, it was that I didn’t know how to do it. I knew how to speak and string words together, but no one ever sat me down and taught me the purpose of communication or how to effectively express myself so I was heard and how to listen so I could understand. A lot of times it seemed that because I knew how to talk, that automatically meant I should know how to communicate.

Ramp Up Your Warm Up: Prepare With Purpose How do you approach your warm up? If you’re like most people, you come into the gym, spend a couple of minutes on the rower or the Airdyne, do some dynamic stretching, air squats, push ups, and boom – you’re good to go. That would be enough of a warm up to tackle more than 90 percent of workouts if you’re a recreational athlete. But imagine if we could increase the quality of your training by 5-10 percent just by improving your warm up. MFRMGR reveal plans to remodel offshore WWII torpedo base in Poland Warsaw office MFRMGR has revealed designs to revitalise a former Polish observation tower in the Baltic Sea to create a base for water sports enthusiasts and researchers, accessible only by boat. The lookout station formerly operated as a watch tower for a German research facility responsible for the development of torpedoes during the Second World War, and is one of several derelict structures that rises out of the waters of Puck Bay, on the northern coast of Poland. In its current damaged and inaccessible state the building occasionally operates as a set for film productions and a platform for practicing divers, but is mainly disused and is quickly deteriorating. MFRMGR plans to refurbish the structure and add a new second level. "It is somehow mystic and inaccessible, arising the interest of sunbathers, sailors and adventure-seekers," said the architects, who are also working on an indoor diving and skydiving centre in a pair of disused cement silos outside Warsaw.

Unveiling the Secret - The Roots of Trance - Bleep43 - Unveiling The Secret - The Roots of Trance by Dave Mothersole So there we were, three fresh faced, south London former soul-boys in bashed up Armani jeans and Converse, huddled together on the back of a motorbike taxi, heading off to our first party. “We’ll show these hippies what it’s all about” I thought as the driver, perched up on the bike’s tank, deftly negotiated the pot holes and a million insects buzzed away in the warm night air. Fitspo: how strong became the new skinny Last week, after a cancer benefit honouring her doctor friend, the singer Pink shut down critics who said she had gained weight with a tweet declaring that she felt beautiful and secure. It was a rare moment: a celebrity openly acknowledging the trolls, straight from her phone, then choosing to ignore them and look after her “healthy, voluptuous and crazy strong body” instead. Pink’s mainstream use of the word “strong” is worth noting; the mantra “strong is the new skinny” has been gaining currency online among female gym devotees for some time now.