How to Be a Better Writer: 6 Tips From Harvard’s Steven Pinker 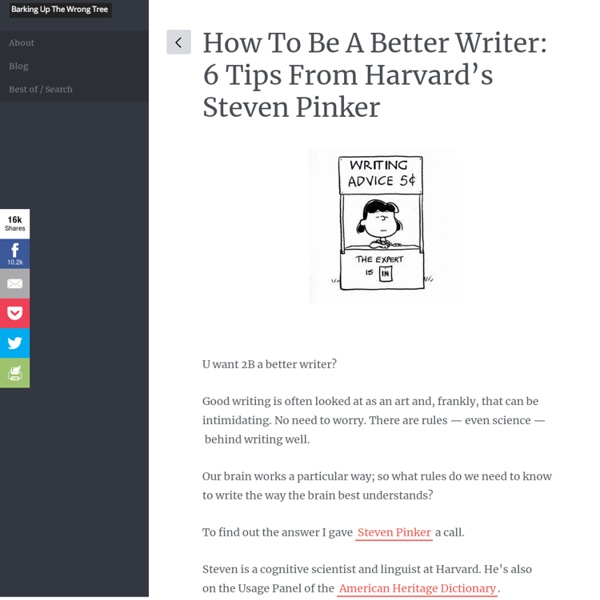 Open Educational Resources (OER): Resource Roundup Resources by Topic: OER, a part of the global open content movement, are shared teaching, learning, and research resources available under legally recognized open licenses -- free for people to reuse, revise, remix, and redistribute. Why are OER important? High-quality OER can save teachers significant time and effort on resource development and advance student learning inside and outside the classroom. Further, open sharing of resources has the potential to fuel collaboration, encourage the improvement of available materials, and aid in the dissemination of best practices. Creating the Setting for Your Novel It’s the middle of October. If you’re a writer aspiring to crank out 50,000 words (or more) during November for National Novel Writing Month (NaNoWriMo), there’s no time like the present to tune up your writing engine and get prepared. So far, we’ve talked about letting our curiosity lead us to intriguing character ideas, and about how our characters’ desires and flaws can help us develop compelling plots. Now, it’s time to consider the world in which our characters will live—the setting—and how we’ll describe it. NaNoWriMo Prep: Week 3

Creator of 5-hour Energy Wants to Power the World's Homes—With Bikes The man who created the 5-hour Energy drink says he has more money than he needs—about $4 billion more. So he’s giving it away, spending his fortune on a quest to fix the world's biggest problems, including energy. Manoj Bhargava has built a stationary bike to power the millions of homes worldwide that have little or zero electricity. Early next year in India, he plans to distribute 10,000 of his Free Electric battery-equipped bikes, which he says will keep lights and basic appliances going for an entire day with one hour of pedaling. Bhargava, who dropped out of Princeton University after a year because he was bored and then lived in ashrams in his native India for 12 years, doesn’t stop at bikes. He’s working on ways to make saltwater drinkable, enhance circulation in the body, and secure limitless amounts of clean geothermal energy—via a graphene cord.

50 Ways to Make Money in 2017 That You've Never Heard Of Ready to fatten your bank account? We’ve found 50 ways to make money this month — and most of them you can do on the side! This post is LONG, so I recommend you bookmark it and knock out five to 10 of them a day. We’ll keep it updated throughout the month and remove/replace any that stop working. So, go challenge yourself. How much can you add to you bank account this month? Teacher Librarian Help This research guide is under construction (I haven’t had time to fully hyperlink). You are welcome to use what I have done below and/or look at my Scoop.it on Ancient China Photo: Terra-Cotta warriors, China. Australian Curriculum – Ancient China Keywords (all found reading a Yr 7 textbook) Ancient ChinaTimeframe 2000BCE- 220CEVarious dynasties – XIA, Shang, Zho, Qin, HanSignificant people/ideas – Shi Huangdi, Confucianism, Daoism, Cosmology

How to Plot Your NaNoWriMo Novel Last week, we encouraged you to cultivate curiosity by going out into the world and observing humans as character fodder for your novel. Now, after applying a divine combo of sweat equity and serendipity, you’ve invented a character who intrigues you and whose story you want to tell. It’s time to start charting a course for that story. NaNoWriMo Prep: Week 2 10 worst mistakes people make in their 20s 1. Pursuing a paycheck instead of a passion. In your 20s, you’re likely still finding who you really are. You’re still allowed to be a little selfish and, hopefully, you’ve got dreams. Because of this, no other time in your life will be so perfect to pursue what makes you happy and what truly energizes you over financial success (which is a crapshoot, anyway). Anything creative and risky takes time to become lucrative, and you will never have this much time again in the rest of your life.

The 25 richest, healthiest, happiest, and most advanced countries in the world Norway has topped the list for seven consecutive, but there's a new number one in 2016.Getty The Legatum Institute, a London based research institute released on Thursday its 10th annual global Prosperity Index, a huge survey that ranks the most prosperous countries in the world. The amount of money a country has is one factor of prosperity, but the Legatum Institute considers much more than that in its ranking. The organisation compared 104 variables to come up with its list. These variables include traditional indicators like per-capita gross domestic product and the number of people in full-time work, but also more interesting figures such as the number of secure internet servers a country has, and how well-rested people feel on a day-to-day basis. The variables are then split into nine subindexes: economic quality, business environment, governance, education, health, safety and security, personal freedom, social capital, and natural environment.

5 Tips for Making Group Work Manageable When teachers ask students to work on a task in groups, they issue an invitation for engagement and, potentially, for chaos! Here are five tips that can help encourage productivity and keep mayhem at bay. 1. Be clear and specific about the task. There’s nothing more frustrating than launching group work and seeing ten hands in the air or (worse) hearing students complain to one another, "What are we supposed to do?" If possible, limit initial verbal explanations to a general overview of the task and process. Writers, Get Ready for NaNoWriMo! Every November, wordsmiths around the globe take on the ultimate writing challenge—to crank out a 50,000-word novel in just thirty days. The event is called NaNoWriMo (an acronym for National Novel Writing Month), and last year it drew 431,626 participants. Although the format is meant to encourage quick, seat-of-your-pants writing, the words writers churn out during the annual event aren’t necessarily for naught. So far, over 250 NaNoWriMo novels, including Sara Gruen’s Water for Elephants and Erin Morgenstern’s The Night Circus, have been published by traditional book publishers.