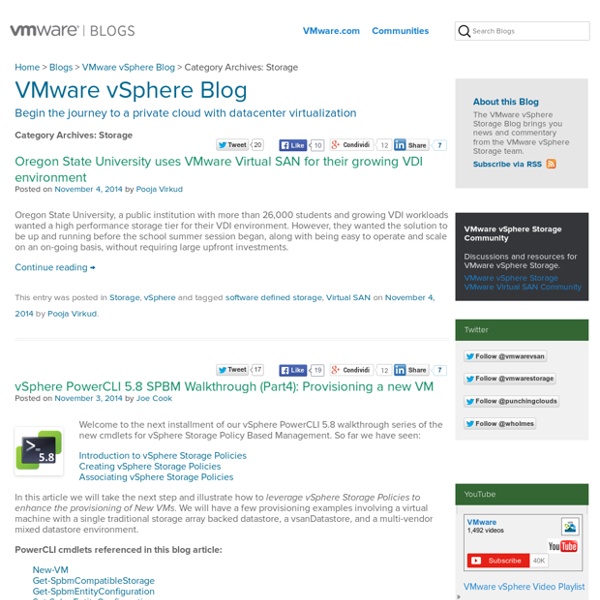 VMware's Virtual SAN Threatens Traditional Data Storage Models VMware has launched the final part of its software defined data center puzzle: a virtual SAN product called Virtual SAN. The product has been in beta testing for the last six months, with around 12,000 customers, but there were still plenty of surprise announcements made at the launch event on March 6. The biggest of these was the maximum size of its Virtual SAN. Previously VMware had said that this would be 8 server nodes, and then 16. But VMware CEO Pat Gelsinger announced that the product has been upgraded to support 32 nodes.

Converged Storage for VMware Imagine what you can achieve by combining the power of VMware vSphere with storage platforms designed to eliminate the challenges of server and client virtualization. HP’s next generation of Converged Storage solutions are designed to enhance the benefits of VMware vSphere, VMware View, and VMware vCloud Solutions. With HP storage supporting your VMware deployments, you are able to: Storage and Server Virtualization from DataCore and VMware Experience SANs with the highest availability, fastest performance and fullest utilization Virtually everything hinges on storage. VMware® vSphere™ and VMware® View™, in particular, place extraordinary demands on it. Too often, disks slow down, interrupt or endanger these centralized IT operations not because they are poorly designed or built, but because they are physically constrained. VMware Virtual Infrastructure helps you to overcome similar limitations in CPU and memory however when it comes to advanced functions such as workload migration, load balancing, fail-over and disaster recovery, server virtualization is completely dependent on highly available (HA) shared storage.

VMware vSphere Storage Appliance (VSA) for Shared Storage End of Availability VMware is announcing the End of Availability of all vSphere Storage Appliance versions, effective April 1, 2014. After this date you will no longer be able to purchase this product. All support and maintenance for vSphere Storage Appliance 5.5 will be unaffected and will continue to follow the Enterprise Infrastructure Support Policy. The End of General Support life date for customers with vSphere Storage Appliance 5.5 remains September 19, 2018. Support contracts can be renewed beyond End of Availbaility until End of General Support. VMware Storage Integration & Top Storage Vendors Research done in collaboration with Stuart Miniman and Nick Allen Introduction In April 2011 Wikibon ran a survey looking at the area of storage and VMware. The results showed that EMC and NetApp had a clear lead in the number of respondents that selected them as the best VMware storage and as the primary VMware storage vendor. Wikibon has further analyzed the results of the survey, including a detailed analysis of the degree of integration.

Storage Architecture Guides - on StorageSearch.com Storage standards are weak standards that are driven by component considerations. Network standards are strong standards that are driven by system considerations A weak standard for Direct Attached Storage (DAS) Today, greater than 95% of all computer storage devices such as disk drives, disk arrays and RAID systems are directly attached to a client computer through various adapters with standardized software protocols such as SCSI, Fibre Channel and others.

VMworld 2014 VMware vCloud Air and ViPR Object Storage This one is short and sweet! The vCloud Hybrid Service is no more, and is now VMware vCloud Air! Furthermore – it keeps getting bigger (more locations), and better (more capabilities – DR as a Service, Backup as a Service, and Platform as a Service) – with one of the new additions being one of the industries’ richest web-scale, geo-dispersed and efficient - which can translate into the lowest cost model – object (and HDFS!) store! VMware storage: SAN configuration basics VMware storage entails more than simply mapping a logical unit number (LUN) to a physical server. VMware’s vSphere enables system administrators to create multiple virtual servers on a single physical server chassis. The underlying hypervisor, vSphere ESXi, can use both internal and external storage devices for guest virtual machines. In this article we will discuss the basics of using storage area network (SAN) storage on vSphere and the factors administrators should consider when planning a shared SAN storage deployment. VMware storage: SAN basics vSphere supports internally-connected disks that include JBODs, hardware RAID arrays, solid-state disks and PCIe SSD cards.

untitled As an architect, I talk to many vendors and customers, and often the conversation is about what makes one storage vendor better than another for VMware. I’m not going to focus on performance and array types of features, but what I do want to cover is the integration points that storage vendors can offer between their products and VMware. When it comes to VMware storage integrations, it comes down to two questions. First, can the storage device do what others can– and if so, then what are the table stakes? Second, what integrations can a vendor offer that’s unique to that vendor?