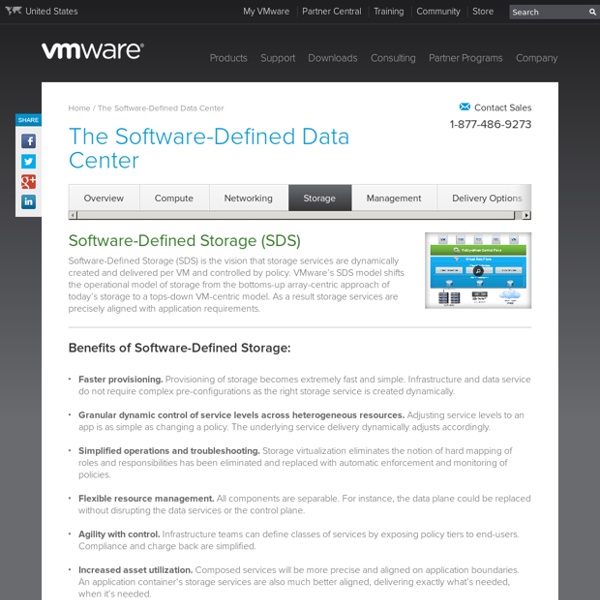 VMworld 2014 VMware vCloud Air and ViPR Object Storage This one is short and sweet! The vCloud Hybrid Service is no more, and is now VMware vCloud Air! Furthermore – it keeps getting bigger (more locations), and better (more capabilities – DR as a Service, Backup as a Service, and Platform as a Service) – with one of the new additions being one of the industries’ richest web-scale, geo-dispersed and efficient - which can translate into the lowest cost model – object (and HDFS!) store! No cloud service is really complete without PaaS and Object stores – and it’s great that the vCloud Air service is getting them… What is delivering the underlying Object/HDFS Storage? Answer – EMC ViPR. Yup – the VMware vCloud Air Object Storage service runs on EMC ViPR Object! For the doubters for the concept of the Federation, sure you can see examples where the Federation parties are “Open” (which we are – see how VMware and EMC are embracing Openstack a little differently, or Pivotal running on AWS, or EMC’s HDFS offerings partnering with Cloudera).

Converged Storage for VMware Imagine what you can achieve by combining the power of VMware vSphere with storage platforms designed to eliminate the challenges of server and client virtualization. HP’s next generation of Converged Storage solutions are designed to enhance the benefits of VMware vSphere, VMware View, and VMware vCloud Solutions. With HP storage supporting your VMware deployments, you are able to: Optimize VM density, availability and business continuity Simplify provisioning and management with less storage and vSphere complexity Save on storage by increasing capacity utilization and efficiency HP Converged Storage for VMware Environments HP 3PAR StoreServ Storage—delivers best-in-class, hardware-assisted integration with VMware vSphere along with guarantees to double your VM density and cut your capacity requirements in half. HP StoreOnce Backup—reduces backup data in vSphere environments by up to 20x by eliminating duplicated data. HP VirtualSystem Solution brief (PDF 274 KB) Increasing VM density

VMware's Virtual SAN Threatens Traditional Data Storage Models VMware has launched the final part of its software defined data center puzzle: a virtual SAN product called Virtual SAN. The product has been in beta testing for the last six months, with around 12,000 customers, but there were still plenty of surprise announcements made at the launch event on March 6. The biggest of these was the maximum size of its Virtual SAN. Now for some math. "This is a monster," said Gelsinger, echoing the monster VM concept that the company introduced in 2011 with the introduction of vSphere 5. He added that performance scales linearly - a 16 node setup offers 1M IOPS, a 32 node one offers 2M IOPS - and despite his previous comment about 32 nodes being monstrous, he hinted that even larger Virtual SANs are on the roadmap: "There will be more in the future. So how does Virtual SAN work and what makes it different from other virtual storage products from the likes of Nutanix or Nexenta? The next question is: how do you build a Virtual SAN? How much will they cost?

VMware wants to be the VMware of Networking « IT 2.0 By Massimo, on April 17th, 2012 There have been a lot of discussions lately about SDN (Software Defined Networking). Arguably SDN may mean a lot of different things to a lot of different people. If you ask the like of Facebook, Google and academic researchers they will probably tell you that SDN is all about gaining full visibility (and control) on how packets flow on the network. People and organizations that are closer to the commercial world may tell you that SDN is all about creating an abstraction layer (virtualization anyone?) in the network – from layer 2 all the way to layer 7. I’d like to focus on the latter definition of SDN. A few weeks ago Cisco’s Lauren Cooney asked a question on twitter on the line of “how would you define SDN?”. Look at the picture. SDN purists may very well argue that this PDF was not including important aspects of SDN such as self-service capabilities and a proper API to access these functionalities. Massimo.

VMware Storage Integration & Top Storage Vendors Research done in collaboration with Stuart Miniman and Nick Allen Introduction In April 2011 Wikibon ran a survey looking at the area of storage and VMware. Wikibon has further analyzed the results of the survey, including a detailed analysis of the degree of integration. Figure 1 – Relative Positioning of VMware Storage Integration by VendorSource: Wikibon Survey April 2011, n=361, and detailed analysis of vendor implementations. Wikibon believes that practitioners can use the methodology in this report to help position the importance of integration features for their own VMware storage decisions and to help decide which vendors to include in RFPs. Vendors and Storage Assessed Wikibon looked at the major storage offerings from the six (6) largest storage vendors. Dell (EqualLogic and Compellent arrays) EMC (VMAX and VNX arrays) HDS (VSP and AMS arrays) HP (LeftHand and 3PAR arrays) IBM (XIV and DS8000 arrays) NetApp (FS6xxx array) Rating Importance of Integration Features Conclusions

Virtual Networking 101: Understanding VMware Networking May 30, 2012By Petra Jorgenson On a basic, structural level, virtual networks in VMware aren’t that different from physical networks; vSphere is designed to mimic the functions of a physical network, so a lot of the network hardware you’ll find in the real world, you’ll find virtualized in VMware. If you understand how physical networks operate, then understanding virtual networking shouldn’t be too difficult. Before jumping into an explanation of how VMware handles virtual networking, I’ll first provide a quick refresher of the basic equipment that makes up a physical network. To connect to a network, a computer must be network-capable, meaning that it must have a working network interface controller (NIC), also known as a network card or network adapter, installed. A virtual network is made up of all of the same hardware described above, but these objects are, obviously, virtualized. Standard Switches On a more technical level, a vSwitch attaches to the VMkernel inside a host server.

Connect to VMWare virtual machines using Remote Desktop Had a short training on VMWare on Tuesday, the software development department finally got the official permission (read: get a license) to use VMWare Workstation. I’m no stranger to Virtual Machines (VMs) – started playing with Virtual PC 2005 a fwe years back and I understood the general concepts of hardware virtualization. The biggest problem I have with VMs in general is the slowness; I’d rather develop directly on my PC, which is faster. Regardless, virtual machines provide a way to simulate multiple computers and I’ve done 3-tier software testing (client to app server using WCF and app server to SQL 2005 backend) to verify our framework can support both 2-tier (client –> DB) and 3-tier deployments. Fast forward to the current time, I’d like to be able to do some coding on Windows 7; unfortunately Windows 7 is not quite sanctioned yet to be deployed, and it’s a pain to have to dual-boot. . When done, click OK and the NAT Settings dialog will show up your port forward: .