VMware wants to be the VMware of Networking « IT 2.0 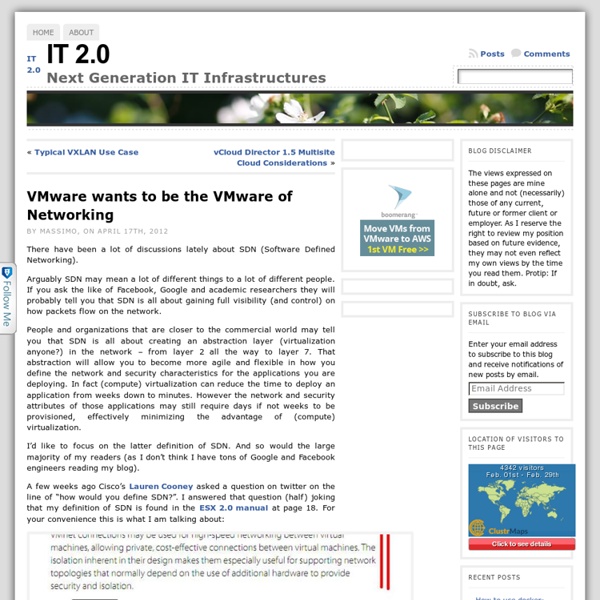 By Massimo, on April 17th, 2012 There have been a lot of discussions lately about SDN (Software Defined Networking). Arguably SDN may mean a lot of different things to a lot of different people. If you ask the like of Facebook, Google and academic researchers they will probably tell you that SDN is all about gaining full visibility (and control) on how packets flow on the network. People and organizations that are closer to the commercial world may tell you that SDN is all about creating an abstraction layer (virtualization anyone?) in the network – from layer 2 all the way to layer 7. I’d like to focus on the latter definition of SDN. A few weeks ago Cisco’s Lauren Cooney asked a question on twitter on the line of “how would you define SDN?”. Look at the picture. SDN purists may very well argue that this PDF was not including important aspects of SDN such as self-service capabilities and a proper API to access these functionalities. Massimo.

Storage and Server Virtualization from DataCore and VMware Experience SANs with the highest availability, fastest performance and fullest utilization Virtually everything hinges on storage. VMware® vSphere™ and VMware® View™, in particular, place extraordinary demands on it. Too often, disks slow down, interrupt or endanger these centralized IT operations not because they are poorly designed or built, but because they are physically constrained.

Connect to VMWare virtual machines using Remote Desktop Had a short training on VMWare on Tuesday, the software development department finally got the official permission (read: get a license) to use VMWare Workstation. I’m no stranger to Virtual Machines (VMs) – started playing with Virtual PC 2005 a fwe years back and I understood the general concepts of hardware virtualization. The biggest problem I have with VMs in general is the slowness; I’d rather develop directly on my PC, which is faster. Can’t say I’ve delved deep into it, but I know enough to utilize it and be dangerous What is VMware vCenter Server? VMware vCenter Server, formerly known as VirtualCenter, is the centralized management tool for the vSphere suite.... By submitting your email address, you agree to receive emails regarding relevant topic offers from TechTarget and its partners. You can withdraw your consent at any time. Contact TechTarget at 275 Grove Street, Newton, MA. You also agree that your personal information may be transferred and processed in the United States, and that you have read and agree to the Terms of Use and the Privacy Policy.

VMware vSphere 5 Host NIC Network Design Layout and vSwitch Configuration [Major Update] This is an update to an older post and I wanted to overhaul it for the Indy VMUG... This was also another VMworld submission that didn't get the votes. See what you guys are missing out on? :) As vSphere has progressed, my current 6, 10, and 12 NIC designs have slowly depreciated. In an effort to update these to VMware vSphere 5, I took the 2 most popular configurations of 6 and 10 NICs and updated the Visios to make them a bit more pretty. Difference between vSphere, ESXi and vCenter There is a lot of buzz of VMware virtualization solution these days. No doubt that VMware is the number one virtualization solution provider in the industry. People who are new to VMware’s virtualization platform often get confused while learning VMware vSphere and its components. So today I will be explaining all about vSphere and its components. Folks face difficulty to know about major components of vSphere. It’s important to know the difference between vSphere, ESXi and vCenter.

What is one issue for adopters of vCenter Server Appliance 6? When it comes to running vSphere 6, administrators will have to choose between the Linux-based appliance dubbed... By submitting your email address, you agree to receive emails regarding relevant topic offers from TechTarget and its partners. You can withdraw your consent at any time. Contact TechTarget at 275 Grove Street, Newton, MA. New User’s Guide to Configuring VMware ESX Networking via CLI 23 June 2009 A lot of the content on this site is oriented toward VMware ESX/ESXi users who have a pretty fair amount of experience. As I was working with some customers today, though, I realized that there really isn’t much content on this site for new users. That’s about to change. As the first in a series of posts, here’s some new user information on creating vSwitches and port groups in VMware ESX using the command-line interface (CLI).

vCenter Server: physical or virtual? - vInfrastructure Blog This post is also available in: Italian vCenter Server vDesign: Physical vs Virtual Machine Over the last years there have been some controversy over this topic: should vCenter Server be a physical or a virtual machine? VMware ESX network redundancy via Fibre Channel multipathing VMware ESX has built-in support for Fibre Channel multipathing, which enables network redundancy. There are several... By submitting your email address, you agree to receive emails regarding relevant topic offers from TechTarget and its partners. You can withdraw your consent at any time. Contact TechTarget at 275 Grove Street, Newton, MA.

VMware Certification Recertification Questions? Find the answers here Ready to register for your exam? See how to request Exam Authorization here Multiple accounts? Learn how to merge them here