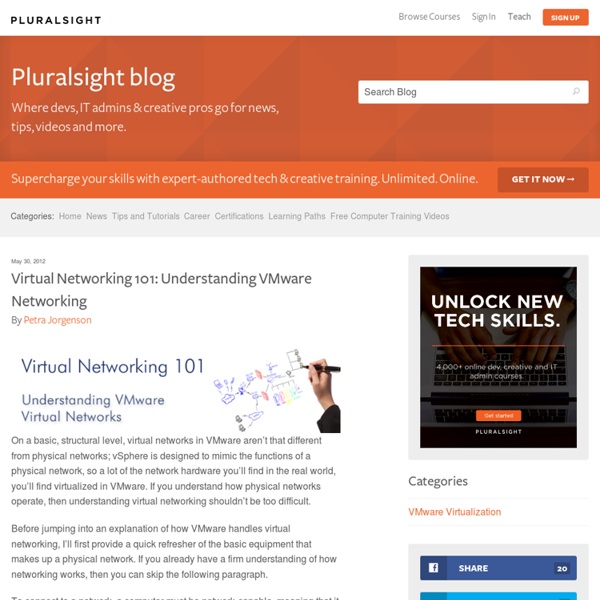 VMware NSX: Game Changer for Data Center Networks VMware's network virtualization product, NSX, may upend data center networks the same way the hypervisor changed servers. Now that VMware has conquered data center computing via server virtualization, the company is opening a beachhead on the network via its NSX product, which is being officially launched today at VMworld in San Francisco. VMware NSX is a software-defined network (SDN) that uses controllers and overlay networking. I'll examine just a few of the key aspects of the announcement and how they apply to your data center strategy. Overlay networking refers to the use of protocols such as VXLAN and STT to create a virtual network between hypervisors. I've written previously about the value of overlay networking, but the following are the key points to note about VMware's approach: First, you only have to configure the physical hypervisor network port once with a single IP address, because the overlay tunnels are sourced from an IP address. Networks Agents as Software 1 of 2

VMware wants to be the VMware of Networking « IT 2.0 By Massimo, on April 17th, 2012 There have been a lot of discussions lately about SDN (Software Defined Networking). Arguably SDN may mean a lot of different things to a lot of different people. People and organizations that are closer to the commercial world may tell you that SDN is all about creating an abstraction layer (virtualization anyone?) I’d like to focus on the latter definition of SDN. A few weeks ago Cisco’s Lauren Cooney asked a question on twitter on the line of “how would you define SDN?”. Look at the picture. SDN purists may very well argue that this PDF was not including important aspects of SDN such as self-service capabilities and a proper API to access these functionalities. I also hear a lot of discussions about VMware missing credibility in the networking space. What I am saying is that, in my opinion, this is a complete new segment of the market and there are two paths to become a known SDN (aka “networking virtualization“) leader. Massimo.

VMware ESX network redundancy via Fibre Channel multipathing VMware ESX has built-in support for Fibre Channel multipathing, which enables network redundancy. There are several... By submitting your email address, you agree to receive emails regarding relevant topic offers from TechTarget and its partners. You can withdraw your consent at any time. Contact TechTarget at 275 Grove Street, Newton, MA. You also agree that your personal information may be transferred and processed in the United States, and that you have read and agree to the Terms of Use and the Privacy Policy. ways to access multipathing controls, and three different multipathing policies. Understanding Fibre Channel multipathing Most Fibre Channel-based storage area networks (SANs) are built so that there isn't a single point of failure. As a result of this design, hosts have multiple ways of reaching a logical unit number (LUN). For most users, viewing and setting multipathing information is best handled with the VI Client.

Understanding NAT Features | Documentation | Knowledge Base | Discussion Forums Prev Contents Last Next Network address translation — or NAT — provides a simple way for virtual machines to use most client applications over almost any type of network connection available to the host. The only requirement is that the network connection must support TCP/IP. NAT is useful when you have a limited supply of IP addresses or are connected to the network through a non-Ethernet network adapter. NAT works by translating addresses of virtual machines in a private VMnet network to that of the host machine. NAT uses the host's own network resources to connect to the external network. The chief advantage of NAT is that it provides a transparent, easy to configure way for virtual machines to gain access to network resources. This section discusses the following topics: