How to setup a test network in VMware & Virtual Box 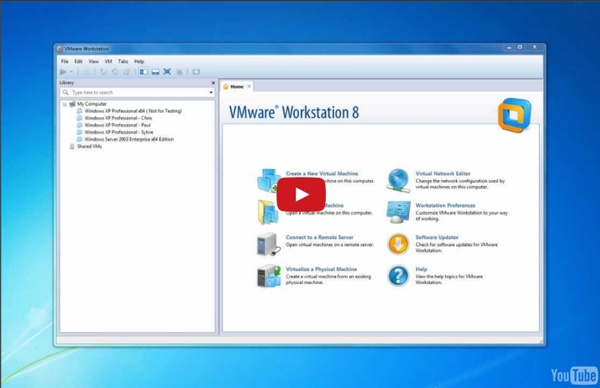 VMware ESX network redundancy via Fibre Channel multipathing VMware ESX has built-in support for Fibre Channel multipathing, which enables network redundancy. There are several... By submitting your email address, you agree to receive emails regarding relevant topic offers from TechTarget and its partners. You can withdraw your consent at any time. You also agree that your personal information may be transferred and processed in the United States, and that you have read and agree to the Terms of Use and the Privacy Policy. ways to access multipathing controls, and three different multipathing policies. Understanding Fibre Channel multipathing Most Fibre Channel-based storage area networks (SANs) are built so that there isn't a single point of failure. As a result of this design, hosts have multiple ways of reaching a logical unit number (LUN). For most users, viewing and setting multipathing information is best handled with the VI Client. Select Storage Adapters, then select a specific adapter and right-click on one of the detected LUNs.

New User’s Guide to Configuring VMware ESX Networking via CLI 23 June 2009 A lot of the content on this site is oriented toward VMware ESX/ESXi users who have a pretty fair amount of experience. As I was working with some customers today, though, I realized that there really isn’t much content on this site for new users. That’s about to change. For new users who are seeking a thorough explanation of how VMware ESX networking functions, I’ll recommend a series of articles by Ken Cline titled The Great vSwitch Debate. Before I get started it’s important to understand that, for the most part, the information in this article applies only to VMware ESX. The majority of all the networking configuration you will need to perform on VMware ESX boils down to just a couple commands: esxcfg-vswitch: You will use this command to manipulate virtual switches (vSwitches) and port groups.esxcfg-nics: You will use this command to view (and potentially manipulate) the physical network interface cards (NICs) in the VMware ESX host. esxcfg-vswitch -a <vSwitch Name>

VMware NSX: Game Changer for Data Center Networks VMware's network virtualization product, NSX, may upend data center networks the same way the hypervisor changed servers. Now that VMware has conquered data center computing via server virtualization, the company is opening a beachhead on the network via its NSX product, which is being officially launched today at VMworld in San Francisco. VMware NSX is a software-defined network (SDN) that uses controllers and overlay networking. I'll examine just a few of the key aspects of the announcement and how they apply to your data center strategy. Overlay networking refers to the use of protocols such as VXLAN and STT to create a virtual network between hypervisors. I've written previously about the value of overlay networking, but the following are the key points to note about VMware's approach: First, you only have to configure the physical hypervisor network port once with a single IP address, because the overlay tunnels are sourced from an IP address. Networks Agents as Software 1 of 2

Virtual Networking 101: Understanding VMware Networking May 30, 2012By Petra Jorgenson On a basic, structural level, virtual networks in VMware aren’t that different from physical networks; vSphere is designed to mimic the functions of a physical network, so a lot of the network hardware you’ll find in the real world, you’ll find virtualized in VMware. If you understand how physical networks operate, then understanding virtual networking shouldn’t be too difficult. Before jumping into an explanation of how VMware handles virtual networking, I’ll first provide a quick refresher of the basic equipment that makes up a physical network. To connect to a network, a computer must be network-capable, meaning that it must have a working network interface controller (NIC), also known as a network card or network adapter, installed. A virtual network is made up of all of the same hardware described above, but these objects are, obviously, virtualized. Standard Switches On a more technical level, a vSwitch attaches to the VMkernel inside a host server.

VMware wants to be the VMware of Networking « IT 2.0 By Massimo, on April 17th, 2012 There have been a lot of discussions lately about SDN (Software Defined Networking). Arguably SDN may mean a lot of different things to a lot of different people. If you ask the like of Facebook, Google and academic researchers they will probably tell you that SDN is all about gaining full visibility (and control) on how packets flow on the network. People and organizations that are closer to the commercial world may tell you that SDN is all about creating an abstraction layer (virtualization anyone?) in the network – from layer 2 all the way to layer 7. I’d like to focus on the latter definition of SDN. A few weeks ago Cisco’s Lauren Cooney asked a question on twitter on the line of “how would you define SDN?”. Look at the picture. SDN purists may very well argue that this PDF was not including important aspects of SDN such as self-service capabilities and a proper API to access these functionalities. Massimo.

Configuring a Virtual Network Features | Documentation | Knowledge Base | Discussion Forums Prev Contents Last Next The first topics in this section give you a quick look at the virtual networking components that VMware Workstation provides and show how you can use them with your virtual machine. VMware vSphere 5 Host NIC Network Design Layout and vSwitch Configuration [Major Update] | Tech Blog | Blog This is an update to an older post and I wanted to overhaul it for the Indy VMUG... This was also another VMworld submission that didn't get the votes. See what you guys are missing out on? :) As vSphere has progressed, my current 6, 10, and 12 NIC designs have slowly depreciated. The assumption of these physical NIC designs is that these hosts are going to be configured with Enterprise Plus Licensing so all the vSphere features can be used. They key to any design is discovering requirements. Design considerations Discovering RequirementsNetwork InfrastructureIP InfrastructureStorageMultiple-NIC vMotionFault TolerancevSphere or vCloudStrive for Redundancy & Performance Network Infrastructure The size of the business will usually dictate the type of servers you acquire. Rackmount servers have the same compute potential as blade servers but you also get a greater failure domain. Depending on the amount of VMs your host can hold, should be an indicator of 1GB vs 10GB. IP Infrastructure

Connect to VMWare virtual machines using Remote Desktop Had a short training on VMWare on Tuesday, the software development department finally got the official permission (read: get a license) to use VMWare Workstation. I’m no stranger to Virtual Machines (VMs) – started playing with Virtual PC 2005 a fwe years back and I understood the general concepts of hardware virtualization. The biggest problem I have with VMs in general is the slowness; I’d rather develop directly on my PC, which is faster. Regardless, virtual machines provide a way to simulate multiple computers and I’ve done 3-tier software testing (client to app server using WCF and app server to SQL 2005 backend) to verify our framework can support both 2-tier (client –> DB) and 3-tier deployments. Fast forward to the current time, I’d like to be able to do some coding on Windows 7; unfortunately Windows 7 is not quite sanctioned yet to be deployed, and it’s a pain to have to dual-boot. . When done, click OK and the NAT Settings dialog will show up your port forward: .