7 Essential Books on Music, Emotion, and the Brain 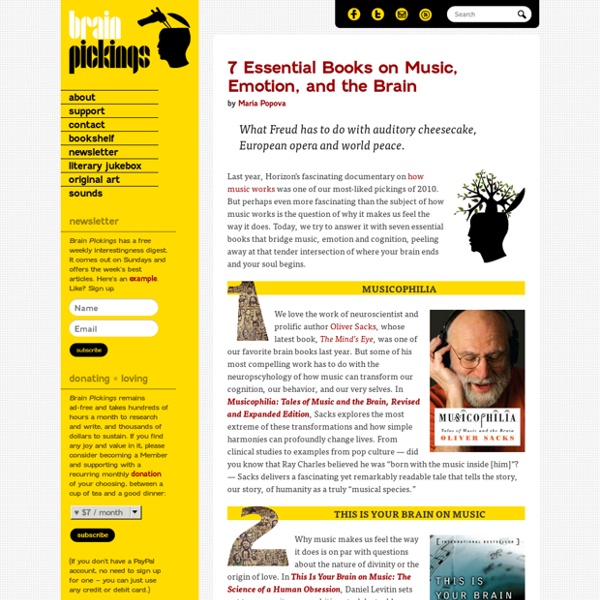 by Maria Popova What Freud has to do with auditory cheesecake, European opera and world peace. Last year, Horizon’s fascinating documentary on how music works was one of our most-liked pickings of 2010. But perhaps even more fascinating than the subject of how music works is the question of why it makes us feel the way it does. Today, we try to answer it with seven essential books that bridge music, emotion and cognition, peeling away at that tender intersection of where your brain ends and your soul begins. We love the work of neuroscientist and prolific author Oliver Sacks, whose latest book, The Mind’s Eye, was one of our favorite brain books last year. Why music makes us feel the way it does is on par with questions about the nature of divinity or the origin of love. Patel also offers this beautiful definition of what music is: Sound organized in time, intended for, or perceived as, aesthetic experience. Donating = Loving Brain Pickings has a free weekly newsletter. Share on Tumblr

Don’t sleep on the Hugo Awards The World Science Fiction Convention convened yesterday in Chicago. Unlike San Diego’s Comic-Con, Worldcon hasn’t gone Hollywood just yet — you’re more likely to share an elevator with astronaut Story Musgrave than Seth MacFarlane. The big autograph sessions are with authors like John “Redshirts” Scalzi, and panels cover topics like “Anarchism in Fantasy and Science Fiction” and “Are You a Dickhead?” (a retrospective of author Philip K. Dick’s work, of course).

Mastercuts <div class="alert_message warning"><div class="set_to_page_width"><i class="icon icon-exclamation-triangle icon-large"></i><strong>Please enable Javascript to take full advantage of our site features.</strong></div></div> Mastercuts Edit Label Profile: Label specialised in releasing compilations. Why Multitasking May Make You Less Productive Nancy Bistritz is senior director at Nurun where she is responsible for marketing and communications initiatives in the U.S. You can follow Nurun on Twitter at @NurunUSA and read its blog at digitalforreallife.com. We’ve all been there before.

The Last Pictures: A Time-Capsule of Humanity in 100 Images Sent into Space for Eternity by Maria Popova “Just as the topology of space is at odds with everyday human experience, the ‘time’ of space is utterly foreign.” Last week, we celebrated 35 years since the Voyager that gave us Pale Blue Dot launched into space, carrying the ultimate mixtape of humanity’s sounds, itself a record of how Carl Sagan and Annie Druyan fell in eternal love. SpongeBob’s effect on kids’ brains - The Checkup As a health writer, I never thought I’d have opportunity to blog about my favorite TV cartoon character, SpongeBob SquarePants. But now my day has come. I’m glad that my kids grew up during the SpongeBob era.

The Hidden History of Artificial Intelligence – Transhumanism and Alchemical Agendas A potent underground idea is usually scheduled for retirement once it makes it onto the History Channel . The Ancient Alien theory was kept alive in pulpish propagation by Erich Von Daniken and Zecharia Stichen for well on four decades (not including the seeds it sprouted from, which were planted much earlier.) However, now that it’s been relegated to awkward production, fleeting interviews, constant criticism and dull dramatization, the whole mythos is starting to get a bit dry. Liminal philosophers like Christopher Knowles and Philip Coppens , whose theories have often tread parallel the ancient runways, keep their investigations fresh by swimming in a more cosmopolitan realm of shadows and contemporary myth.

Is SpongeBob bad for kids? Give the show a break This morning I turned on the news and found this headline: “Pediatricians’ group finds fault with ‘SpongeBob‘” published by Reuters. In the article, the Reuters reporter states: And Monday, the American Academy of Pediatrics will take aim at the 12-year-old Nickelodeon show, reporting a study that concludes the fast-paced show, and others like it, aren’t good for children. Do Androids Dream of Electric Sheep? Do Androids Dream of Electric Sheep? is a science fiction novel by American writer Philip K. Dick. First published in 1968, the book served as the primary basis for the 1982 film Blade Runner. The novel is set in a post-apocalyptic near future, where Earth and its populations have been damaged greatly by nuclear war during World War Terminus.