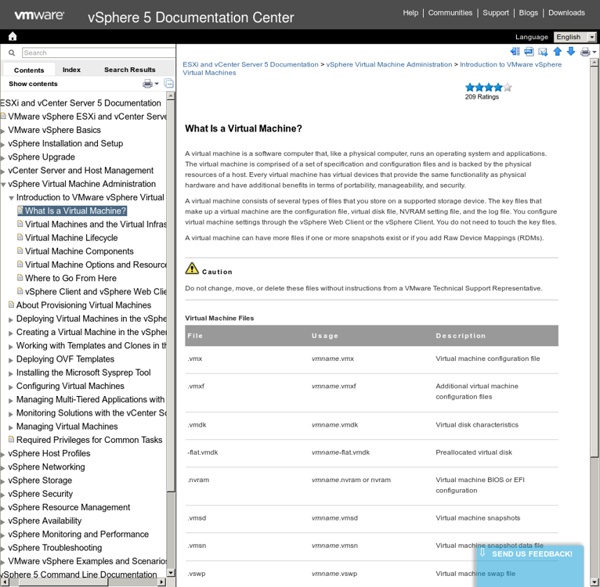 HTG Explains: What is a Virtual Machine Hypervisor? Hypervisors are what make virtual machines possible, and they aren’t just for servers anymore. You probably use one every day and don’t even know it. If you don’t use one now, you will in the near future. A hypervisor is software that exists outside of a guest operating system to intercept the commands sent to the computer hardware. The term “hypervisor” comes from the different levels of an operating systems kernel; it performs actions with more authority than the “supervisor” level, hence, hyper-visor. Image via striatic on Flickr Hypervisor Basics A hypervisor is also known as a Virtual Machine Manager (VMM) and its sole purpose is to allow multiple “machines” to share a single hardware platform. The hypervisor separates the operating system (OS) from the hardware by taking the responsibility of allowing each running OS time with the underlying hardware. Separating hardware and software turns out to be good for portability as well. Different Hypervisor Types Hypervisors of the Future

Difference between vSphere, ESXi and vCenter There is a lot of buzz of VMware virtualization solution these days. No doubt that VMware is the number one virtualization solution provider in the industry. People who are new to VMware’s virtualization platform often get confused while learning VMware vSphere and its components. VMware Inc. is a software company that develops many suites of software products specially for providing various virtualization solutions. vSphere is a software suite that comes under data center product. vSphere is like Microsoft Office suite which has many softwares like MS Office, MS Excel, MS Access and so on. ESXi, vSphere client and vCenter are components of vSphere. vCenter server is similar to vSphere client but it’s a server with more power. vCenter server is installed on Windows Server or Linux Server. You can install vSphere in your PC to get more knowledge of this amazing technology. The following two tabs change content below.

What is VMWare? What is a Virtual Appliance? Using Virtual Appliances with Parallels? Windows on Mac Q&A - Revised March 22, 2010 To be notified of new Q&As, sign up by e-mail as well as use Twitter and Google+. If you find this page useful, please Bookmark & Share it. Thank you. What is VMWare? From the "About Us" page of the VMWare company website: VMware was founded in 1998 to bring virtual machine technology to industry-standard computers. More than 4 million users and over 20,000 corporate customers of all types and sizes use VMware software, including 99 of the Fortune 100 companies. VMWare is widely regarded to be the leader in the virtualization marketplace, and many corporate users are no doubt excited to have the company developing a virtualization solution for MacOS X. What is a "Virtual Appliance"? In the Virtual Appliance Marketplace, VMWare states that: A virtual appliance is a pre-built, pre-configured and ready-to-run software application packaged with the operating system inside a virtual machine.

Top 10 hypervisors: Choosing the best hypervisor technology Once you choose the type of hypervisor that fits your needs, you need to choose the best hypervisor technology... By submitting your email address, you agree to receive emails regarding relevant topic offers from TechTarget and its partners. You can withdraw your consent at any time. Contact TechTarget at 275 Grove Street, Newton, MA. You also agree that your personal information may be transferred and processed in the United States, and that you have read and agree to the Terms of Use and the Privacy Policy. for your infrastructure. Bare-metal virtualization hypervisors VMware ESX and ESXi VMware has the most mature hypervisor technology by far, offering advanced features and scalability. Microsoft Hyper-V Microsoft Hyper-V has emerged as a serious competitor to VMware ESX and ESXi. Citrix XenServer Citrix XenServer is a mature platform that began as an open source project. Oracle VM Oracle VM is Oracle’s homegrown hypervisor technology based on open source Xen.

What is one issue for adopters of vCenter Server Appliance 6? When it comes to running vSphere 6, administrators will have to choose between the Linux-based appliance dubbed... By submitting your email address, you agree to receive emails regarding relevant topic offers from TechTarget and its partners. You can withdraw your consent at any time. Contact TechTarget at 275 Grove Street, Newton, MA. You also agree that your personal information may be transferred and processed in the United States, and that you have read and agree to the Terms of Use and the Privacy Policy. vCenter Server Appliance (vCSA) or the Windows-based version to manage the virtual infrastructure. While vCSA has many advantages to it from a maintenance and licensing aspect, there have also been a few drawbacks. As Linux grows in popularity thanks to appliances and containers, does that mean the Windows version of vCenter Server may not have much time left in the data center? Tom Walat asks:

What is VMware? - Definition from WhatIs.com VMware is a virtualization and cloud computing software provider based in Palo Alto, California. Founded in 1998, VMware is a subsidiary of Dell Technologies. EMC Corporation originally acquired VMware in 2004; EMC was later acquired by Dell Technologies in 2016. VMware bases its virtualization technologies on its bare-metal hypervisor ESX/ESXi in x86 architecture. By submitting your personal information, you agree that TechTarget and its partners may contact you regarding relevant content, products and special offers. You also agree that your personal information may be transferred and processed in the United States, and that you have read and agree to the Terms of Use and the Privacy Policy. With VMware server virtualization, a hypervisor is installed on the physical server to allow for multiple virtual machines (VMs) to run on the same physical server. VMware's current CEO is Patrick P. Ferran Rodenas/Flickr VMware products Data Center and Cloud Infrastructure Networking and Security

Hypervisor 101: Understanding the Virtualization Market Over the past decade, virtualization technologies have gone from small shop and educational tools to full blown IT solutions. In the past, many major software vendors would explicitly say that their software will not work in a virtual state and will not be supported if the end-user decided to virtualize. Now, the technology has changed and evolved. Some of the biggest software makers are now creating design and best practices around a virtual infrastructure. The modern hypervisor: A high-level explanation The evolution of virtualization greatly revolves around one piece of very important software. Type I Hypervisor. Now that there is a better understanding of the hypervisor and the various components which fall under it, we can examine the major players in the industry. The “Big Three” Hypervisor Vendors Although there are several smaller organizations which are developing their own hypervisor technologies, three manufacturers have really taken the market by storm with their solutions.