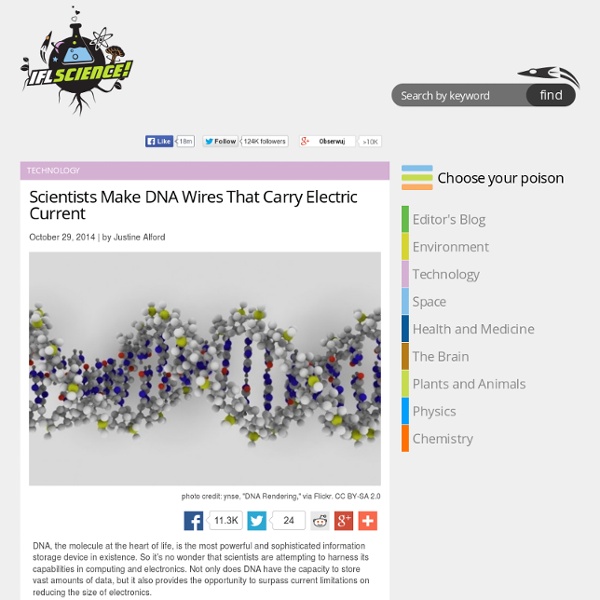 DNA, the molecule at the heart of life, is the most powerful and sophisticated information storage device in existence. So it’s no wonder that scientists are attempting to harness its capabilities in computing and electronics. Not only does DNA have the capacity to store vast amounts of data, but it also provides the opportunity to surpass current limitations on reducing the size of electronics. Although we’ve drastically shrunk computers since their advent, scientists can only go so far because a minimum space between transistors-- the main building block of electronic devices-- is required to prevent interference. DNA could provide us with a unique way get around this, but unfortunately, scientists have faced a considerable challenge with using it in the field of “molecular electronics,” or the use of molecules in the production of electronic components. [Via Hebrew University of Jerusalem, Nature Nanotechnology, IEEE, Tech Times and Science Times]

Scientists Identify Genes Associated With Violent Crime For the most part, we’re all products of our genes, the chemical codes that determine how our bodies are made up. That being said, we’re not slaves to our DNA and environmental factors are also known to play a big part. So can we blame certain behaviors, such as the act of committing a violent crime, on the chemistry that we’re born with? Scientists have been contemplating this for some time, and although it has been suggested that our life experiences probably contribute to around half of the influence, evidence in support of this idea was lacking. As described in the journal Molecular Psychiatry, to probe whether certain genes could be contributing to the likelihood of committing violent behaviors, researchers looked at the genetic make-up of close to 900 criminals in Finland. One gene, which had a lower than normal activity in the violent offenders, was responsible for a protein called monoamine oxidase A (MAOA), and the other produced a member of the cadherin family, CDH13.

Activating Body’s Brown Fat Could Lead To New Weight Loss Method The World Health Organization estimates that over 1.4 billion adults and over 40 million children under the age of five are overweight or obese. Excess body weight can lead to type 2 diabetes, heart disease, infertility, cancer and neurodegenerative disease, and unhealthy weight is associated with one in five American deaths. However, new research has found that it could be possible to stimulate brown fat to burn calories or convert white fat to brown fat, reducing body weight. Thorsten Gnad of the University of Bonn in Germany is the lead author of the paper published in Nature. There are two main types of adipose (fat) in mammals: brown and white. White fat is stored energy and is the fat that adds bulk to the body. "Not all fat is equal," said senior author Alexander Pfeifer in a press release. "If adenosine binds to this receptor in brown fat cells, fat burning is significantly stimulated," Gnad explained. White fat cells, on the other hand, lack this adenosine receptor.

MIT: Synthetic DNA Can Be Used as Ink for Nanoscale 3D Printers This enables medical applications and nanomaterials MIT discovers how to use DNA as a printing material 4 photosVIEW ALL Not that long ago we wrote about microscopic robots which could be 3D printed (despite the small scale) and deliver drugs directly to affected areas. You may or may not know that, back in May 2014, a replicable synthetic form of DNA was created, which wasn't found in nature but had all the traits of normal DNA. This opened new doors in fields like diagnostics, the creation of medicines and vaccines, even the development and production of nanomaterials. DNA can be programmed by changing the sequence, and its stable structure allows scientists to build nanoscale structures based on need. At least this was the idea. MIT researchers turn synthetic DNA into ink for nanoscale 3D printed structures A team under the leadership of Mark Bathe, an associate professor of biological engineering, developed a program called CanDo back in 2011, which can generate 3D DNA structures.

A Lab In South Korea Will Clone Your Dog For $100,000 People cope with the loss of their pets in very different ways. Some carry on as normal, some may cuddle their pet’s favorite chew toy while sobbing over Marley & Me, some immediately rush out and buy a replacement; there’s no right or wrong way to deal with it. But it turns out that some people are willing to go to rather extreme measures to mend their broken hearts: cloning their dog. Since 2006, a controversial biotech lab in South Korea called Sooam has been offering cloning services for the meagre sum of $100,000 (£64,000); I guess some would say their companions are priceless. Hwang was publicly disgraced and expelled from his academic institution for fabricating research on human embryo cloning and still faces criminal charges. The cloning technique Sooam scientists use is the same 50 year old method that brought us Dolly the sheep back in 1996—nuclear transfer. Of course, clients don’t get their old dog back, but more of an identical twin. [Via Business Insider and The Guardian]

News Highlights:Human Stem Cell Clock Reset to Zero Adult human stem cells are routinely taken back to early developmental states—but not all the way back, not to the very cusp of human development. Yes, under the ministrations of scientists, these cells are typically induced to pluripotency, the ability to follow different developmental courses. Yet these cells are not blank slates. They are not “pristine.” “Almost zero” stem cells naturally vary. All such complications may be swept aside, or considerably diminished, now that scientists from the Wellcome Trust, the Babraham Institute, and the European Bioinformatics Institute have found a way to reset human pluripotent stem cells to a pristine state—a developmental state equivalent to cells found in an embryo before it implants in the womb (7–9 days old). The scientists achieved for human cells a feat previously limited to cells from mice and rats. To overcome this difficulty, the researchers took a new approach.

Endurance Training Influences Gene Expression In Muscles It is recommended that adults perform at least 30 minutes of moderate-intensity aerobic exercise five days a week to reduce the risk of heart disease, stroke, obesity, and many other diseases. A new study has found that long-term endurance training actually changes the way genes are expressed in skeletal muscle, improving metabolism and controlling inflammation. This information could be used to prevent and treat diseases associated with a sedentary lifestyle. “It is well-established that being inactive is perilous, and that regular physical activity improves health, quality of life and life expectancy,” Sundberg said in a press release. For the three-month-long study, 23 healthy young adults engaged in 45 minutes of endurance training four times a week. Ultimately, Sundberg’s team found a relationship between change in methylation and activity of about 4,000 genes. Read this next: Seven Sperm Whales Mysteriously Found Dead On Australian Beach

Scientists Discover New Mechanism of Gene Regulation The human genome contains approximately 3.3 billion base pairs of DNA, though only about 1% of it is known to encode proteins. However, roughly 20% of the genome regulates those protein-coding genes and modify the synthesized product in a variety of different ways. A team of researchers have uncovered how regulatory structures are able to identify and bind RNA to perform those complex regulatory functions. The research was led by Michael Sattler of the Helmholtz Zentrum München and the paper was published in Nature. In order to express genes to synthesize protein, the necessary DNA or RNA sequence must become transcribed and converted into messenger RNA (mRNA). This mRNA strand is the template by which ribosomes, transfer RNA (tRNA), and several other RNA-binding proteins will come together and translate the code into polypeptide chains, which eventually form proteins. Sattler’s lab explored the concept using sex-specific regulatory proteins in fruit flies.

APOB, a gene involved in lipid transport, linked to cases of familial extreme longevity -- ScienceDaily In a recent report in Aging Cell, a multidisciplinary team of Spanish scientists, led by Tim Cash and Manuel Serrano at the Spanish National Cancer Research Centre (CNIO), identify rare variants in the APOB gene in several families where exceptional longevity (more than 100 years of age) appears to cluster. Investigators identified three Spanish families with at least two siblings of around 100 years of age and they sequenced their genes in the hope of finding rare variants that could be associated with extreme longevity. Remarkably, only one gene was found carrying rare variants in all the long-lived siblings of the three families, namely, APOB. APOB is an attractive longevity gene because of its previous link to hypobetalipoproteinemia, a putative "longevity syndrome" and also because the protein encoded by APOB works in lipid transport together with the related protein APOE, which has common genetic variants with undisputed assocations with longevity.

Top five myths about genetic modification The Conversation asked CSIRO scientist, Richard Richards, to look at the top five myths about genetic modification (GM), and correct the public record. Myth one: GM is just haphazard, imprecise cross-breeding In genetic engineering, scientists can very precisely select genes and introduce them into their target species. For example, genes that produce insulin for medical use have been introduced into bacteria. In fact, the most dramatic genetic modifications to our crops occurred naturally thousands of years ago when chance events resulted in hybrids of different species. Some of these events have resulted in some of our most important crops such as wheat, sugar cane, canola and cotton. The wheat we consume today, for example, is a natural hybrid of three different wild species. Modern wheat breeders release new varieties after introducing thousands of unknown genes from wild grasses without any regulatory requirements or special testing and with no genetic engineering involved.

Top 10 Innovations 2013 Despite formidable odds, this year was a good one for life science innovation. The double punch of the government-wide belt tightening, known as the sequester, and the two-week federal government shutdown deflated institutional budgets and sowed uncertainty among investors. But new and exciting products still made their way into the marketplace. The competition proved to be so tight that this year’s Top 10 is actually a Top 12, with two ties—for the second and tenth spots. Read about all the products that rose to the top of a very competitive list of submissions to The Scientist’s Top 10 Innovations of 2013. And be sure to visit www.the-scientist.com for lots of extra Top 10 information, including expanded comments from our expert panel of judges and a look at products that earned honorable mentions in this year’s contest. (left to right) BIBHASH MUKHOPADHYAY Manager of business development and a fellow at Johnson & Johnson’s Corporate Office of Science and Technology. nVista HD Inscopix