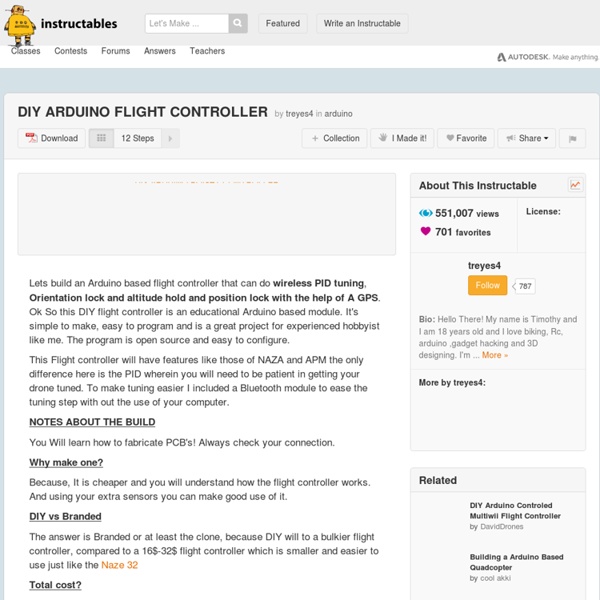 To Tell you the truth this is not the hard part of this build its actually easy as long as you follow the steps. Prepare the following Print out the PDF in HIGH Quality Prepare the baby OIL Prepare pre synthesized PCB 6x6cm Prepare a container filled with ferric Chloride Prepare a container with developer powder ... 3 tsp developer 1cup tap water (agitate until the powder dissolved) Prepare 10 Florescent lamps Lets start! 1.Cut out the PCB layout and apply a small amount of baby oil and gently spread the fluid around the paper.next gently remove any excess baby oil by wiping it with any cloth 2.Get your pre synthesized PCB 6x6cm, Remove the film and place the print side of the paper facing the green side of the PCB "that is important". 3.Get your florescent lamp and Elevate by at least 3 inch 4.Get your Phone-> clock and then Timer... 5. 6. 7. 8. 9. 10. Related:  Hexacopter Drones

aeroquad - An Arduino based four rotor R/C helicopter or quadrocopter. Check out our main website and forum at For feature requests or bug reports, please submit them to: If you are interested in obtaining the latest and greatest code, please visit our main repository at: The AeroQuad is an open-source hardware and software project dedicated to the construction of remote controlled four-rotor helicopters, also known as quadcopters or quadrocopters. AeroQuad hardware typically consists of an Arduino microcontroller (Mega-2560 or Uno) as the flight controller board, and an AeroQuad shield with various sensors, such as an accelerometer and gyroscope. Current Features Planned Features Position hold using optical flow and ultrasonic sensors

Build an Arduino shield for Quadcopter - Arduino Adapter I have been searching for ideas of making a Quadcopter Arduino flight controller Adapter to sit my Arduino nano board and the GY80, also have some header pins for motors and receiver to make the cabling tidy. There are a lot of Arduino shields people have designed for the Quadcopter. I didn’t follow any of the designs. I actually didn’t follow any planned design, and solder the parts on the veroboard as I go along. Here is my own build. This design has a few disadvantages, and there are some quick fixes I applied. BEC voltage input The ESC BEC voltage input should have been all disconnected except one of them. I should actually utilize these BEC 5V voltage supply. Motor and Receiver header pins position motor pins should be placed on all four directions for easier access. Microcontroller Socket A build in socket, or some sort of I2C connection pins to the flight controller would be really handy. 2 more motor pins (to run a hexacopter) Here are some design (mostly PCB design) by other people.

Arduino Quadcopter: What You Need to Build One (DIY Project) If you love the idea of building your own quadcopter but haven’t got a clue how and where to start, you are definitely on the right page. We know how difficult and frustrating the research can be, so we decided to make a tutorial for building your own quadcopter using an Arduino board. We hope that you will find it useful. And, to get you even more excited about your upcoming project, here is an Arduino quadcopter in action: Building your own quadcopter from the ground up includes plenty of hours and hard work. But, with those quadcopters, you will miss out on the long hours and sweat invested in building, and getting to understand the essence of your bird and how it ticks. Exactly the entire process of building the quad is what hobbyists love. General “Quad Science” As the name suggests, it is basically a flying vehicle with four electric motors and four propellers. Now, unlike the traditional helicopter, quad relies on its four rotors to generate uplifting thrust by working together.

Arduino Multiwii Quadcopter Connection Test Today I loaded up the Arduino Multiwii Quadcopter code on the Arduino Uno, and connected everything including a Radio controller, the IMU, ESC and motors, it works straight away! It’s so much easier than I thought. The reason I am using the Arduino as a flight controller was my KK2.0 was totally damaged in the last crash. Luckily everything else apart from the flight controller and frame is fine! So I decided rather than buying a new flight controller, I might try to dig out a spare Arduino board to make one myself. I basically followed this diagram from the Arduino Multiwii website to connect everything. Here is the result. The motors are controlled correctly, and also response to the IMU as well! For the start, I might just use Multiwii software, later on I might try writing one myself. If you find this article useful. To help us maintain and improve this website.

Build A Quadcopter From Scratch - Hardware Overview In this article I will be talking about quadcopter components and how to choose them. This is part of the tutorial series on how to build a quadcopter. In the next post I will be talking about software, how to go about the algorithm and programming. If you are planning on building a quadcopter but not sure how, this is the right place for you. Building a quadcopter from scratch takes a lot of time and effort. For more tutorials, check out this list. This blog post is divided into a three parts What is a Quadcopter and How It WorkQuadcopter Components IntroductionConclusion A QuadCopter is a helicopter with four rotors, so it’s also known as quadrotor. The Quadcopters exist in many different sizes. On a regular helicopter has one big rotor to provide all the lifting power and a little tail rotor to offset the aerodynamic torque generated by the big rotor (without it, the helicopter would spin almost as fast as the propeller) Frame – The structure that holds all the components together.

Quadcopter Dynamics and Simulation - Andrew Gibiansky A helicopter is a flying vehicle which uses rapidly spinning rotors to push air downwards, thus creating a thrust force keeping the helicopter aloft. Conventional helicopters have two rotors. These can be arranged as two coplanar rotors both providing upwards thrust, but spinning in opposite directions (in order to balance the torques exerted upon the body of the helicopter). The two rotors can also be arranged with one main rotor providing thrust and a smaller side rotor oriented laterally and counteracting the torque produced by the main rotor. However, these configurations require complicated machinery to control the direction of motion; a swashplate is used to change the angle of attack on the main rotors. In order to produce a torque the angle of attack is modulated by the location of each rotor in each stroke, such that more thrust is produced on one side of the rotor plane than the other. Quadcopter control is a fundamentally difficult and interesting problem. Kinematics Physics

Connecting elements « MultiWii Dimensions of the Wii Motion Plus are quite similar to Arduino Pro Mini card’s one. This is useful for designing a small and homogeneous card. The 2 PCBs are simply connected by four wires. Wii Motion Plus extension is powered by the regulated 5V of the Arduino Pro Mini. The analog inputs A4 and A5 are connected via the I2C pins SDA and SCL. (the photo describes the old way to power WMP via VCC and not PIN 12) Note that it is not mandatory to use a Nunchuk to operate the Multicopter described in this article.It is mandatory only if you want to have an autolevel feature. The software recognizes automatically the presence of a nunchuk connected. Only 4 wires need to be connected between the WMP and the NK. MultiWii can now handle many more sensors than just the WMP or NK. It’ possible to upgrade a basic setup by adding some sensors with breakout boards (Sparkfun has multiple references) Or it’s possible to buy a complete sensor IMU to connect to an Arduino. Some Arduino board example:

Multicopter Tutorial List I have been sharing my experience and writing a lot about building multicopters, FPV etc, but still, many people ask me questions that I have already answered in some of my posts. Clearly just by throwing people with a lot of information is not going to help them learn quicker, so I decided to put these information into a more structured, better presented tutorial. I included most if not all of my multicopter related posts in this article, hoping that it could make it easier for everyone to find what they need. If you are a beginner, I strongly recommend you read this multicopter beginner tutorial first. It gives you an basic understanding how a multicopter works, and what hardware is required. There are different configurations in multicopter, such as 2 motors, 3 motors, 4 motors. You might be wondering if there are any tips about flying the aircraft for newcomers of this exciting hobby, this post “how to get started with quadcopter” might give you a hint.

AeroQuad Forums - AeroQuad - The Open Source Quadcopter Drones: When the Future Sneaks Up on You