How Kim Kardashian Is Changing the Fashion Industry 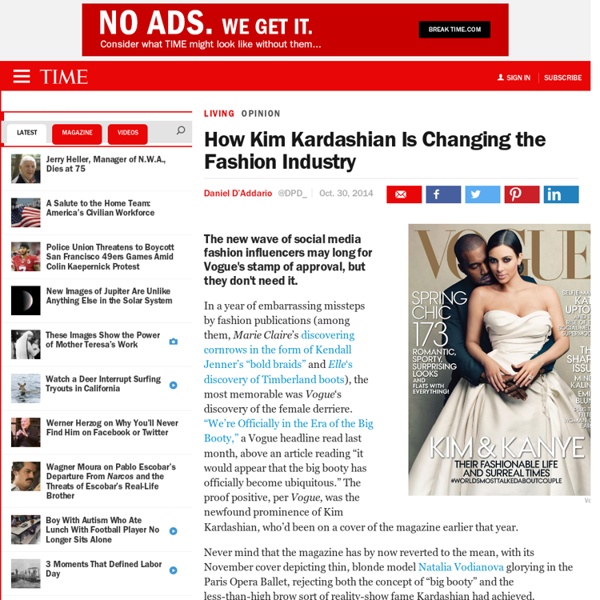 Why Do Celebrities Influence Fashion Trends? Celebrities shape and influence fashion trends. Famous people have always shaped fashion trends throughout history and this is still true today. What is fashion? Fashion is just wearing what is considered popular or hip. What will Alexa Chung's fashion line look like? Alexa Chung will launch a fashion line called Alexachung in May 2017. In a statement, the 32-year-old – with typical kook – commented: “With this first collection, I aim not only to delight your eyeballs but to furnish your wardrobe with all of your soon-to-be favourite pieces.” The truth is, she’s probably on to something. Chung has, arguably, become one of the biggest influencers on what young women wear over the past decade.

Business of Fashion Names the Top 20 Fashion Industry Bigwigs As we approach the start of fashion month, we asked the founder and CEO of Business of Fashion, Imran Amed, to curate a list of his own Beautiful People. Below, Amed highlights the top 20 movers and shakers in the fashion industry. 1. Antoine Arnault, Managing Director of Berluti and Chairman of Loro Piana

Alexander Wang Nicholas Ghesquiere Paul Smith Back Apple IP Case Samsung 05 August 2016 Scarlett Conlon ALEXANDER WANG, Nicholas Ghesquière, Paul Smith, Dries Van Noten, and Alber Elbaz are among the 111 high-profile designers and industry figures who have officially come out in support of Apple in its IP court case with Samsung. The Mac creator has been in a lengthy battle with the South Korean company since 2012, when it accused the latter of copying three of the main design elements of its ground-breaking iPhone: the rounded-corner front face, its bezel and its app-icon grid interface.

are real people the new faces of fashion? "Of course a lot of people are underrepresented in fashion," says photographer and Hood By Air casting director Kevin Amato. "I did an editorial maybe five years ago for a big house and I shot all black boys and the house banned me from shooting their clothes for the whole season." But, says Amato, things are changing. "Now I look and I see diversity. It's what everybody is doing. It's quite brilliant." Fashion brands struggling to find the right social influencers Social media influencers are fast becoming brands’ go-to option for generating trust and credibility among young consumers. According to a new report by Fashion and Beauty Monitor in association with Econsultancy – both sister brands of Marketing Week – 57% of marketers and business owners in the fashion and beauty sectors use influencers as part of their marketing strategy, with an additional 21% looking to introduce this type of activity over the next 12 months. The growing authority of online commentators and YouTube stars such as Zoella has given rise to this new breed of peer-to-peer brand ambassador.

Influencers Are People, Not Media Outlets Twelve years ago I started an influencer agency. I was told I was out of my mind. Leaving a lucrative on-camera position at MTV to move behind-the-scenes seemed mad to most. To me, it was the opportunity of a lifetime. It was abundantly clear that, in a rapidly splintering communications ecosystem, marketers were going to need to wield the power of alpha-consumers if they wanted their messages to resonate. The 20 Most Influential Personal Style Bloggers Right Now Personal style bloggers sometimes get a bad rap -- caricatured as pretty, brainless girls who dress up for their camera-wielding boyfriends and post their results to a WordPress blog. But over the past decade, these independent publishers have become a real force in the fashion industry -- not just snapping up front row seats at fashion shows, but landing major campaigns and collaborations with brands, becoming regular guests on TV shows like "Today" and "America's Next Top Model," and turning their blogs into multimillion-dollar businesses. Some have become household names. Continuing in our annual-ish tradition, today we're releasing our 2015 ranking of the most influential personal style bloggers in the world. This list looks wildly different than it did in 2013. Here's why.

Kylie Jenner, Anna Ewers, Tyga, Zoe Kravitz Star in Alexander Wang Fall 2016 Ads - Alexander Wang Teases Fall 2016 Campaign on Instagram Alexander Wang / Instagram Alexander Wang shared the first look of his fall 2016 campaign this morning, and once again the designer chose a lineup of cool, young stars. Among them are Kylie Jenner, Tyga, Zoe Kravitz, and Wang favorite Anna Ewers. The 25 most powerful people in fashion Fashion You've landed on our old Fashion site Visit our new Fashion or Beauty sites for the latest articles Paris Fashion Week 2016 Fast fashion online business have made a fortune for owners of businesses like Zara — Quartz In its first seven years of existence, Uber has irked cities, flouted regulators, and petrified whole industries. It has yet to make money but is worth a fifth more than BMW and almost a third more than General Motors, both the owners of tons of futuristic technology, tens of billions of dollars in capital equipment, and big profits. In recent deals resembling famous speculative bubbles, rich investors eager for a piece of this juggernaut have poured hundreds of millions of dollars into custom funds that provide exposure to Uber but no equity or financial disclosure. Which is to say that investors have made a one-way, uber-bullish bet on Uber, forecasting that the company will be at the center of an utter transformation of our collective lifestyle. If not everyone is betting on it, they’re at least not betting against it. Even if you wanted to short Uber, it is generally thought impossible to do.