What is VMware VCenter Server? - Definition from Techopedia 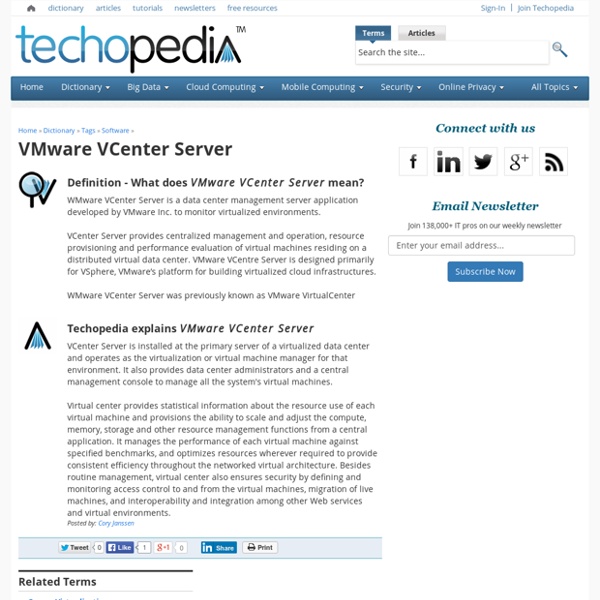 What is one issue for adopters of vCenter Server Appliance 6? When it comes to running vSphere 6, administrators will have to choose between the Linux-based appliance dubbed... By submitting your email address, you agree to receive emails regarding relevant topic offers from TechTarget and its partners. You can withdraw your consent at any time. Contact TechTarget at 275 Grove Street, Newton, MA. You also agree that your personal information may be transferred and processed in the United States, and that you have read and agree to the Terms of Use and the Privacy Policy. vCenter Server Appliance (vCSA) or the Windows-based version to manage the virtual infrastructure.

Difference between vSphere, ESXi and vCenter There is a lot of buzz of VMware virtualization solution these days. No doubt that VMware is the number one virtualization solution provider in the industry. People who are new to VMware’s virtualization platform often get confused while learning VMware vSphere and its components. So today I will be explaining all about vSphere and its components. VMware: Upgrade vCenter Server 5.5 to 6.0 Home > VMware > VMware: Upgrade vCenter Server 5.5 to 6.0 Last week I upgraded VMware vCenter 5.5 server (based Windows 2012R2) at the company environment I work for, the upgrade was very simple. Pre-install: Please check article “Minimum requirements for the VMware vCenter Server 6.x Appliance (2106572)” Installation process – Select: Install – Select: Next

What is VMware vCenter Server? VMware vCenter Server, formerly known as VirtualCenter, is the centralized management tool for the vSphere suite.... By submitting your email address, you agree to receive emails regarding relevant topic offers from TechTarget and its partners. You can withdraw your consent at any time. virtual machine Definition from PC Magazine Encyclopedia Definition of:virtual machine(1) The name given to various programming language interpreters. See Java Virtual Machine and Python.(2) One instance of an operating system along with one or more applications running in an isolated partition within the computer. It enables different operating systems to run in the same computer at the same time. Virtual machines (VMs) are also widely used to run multiple instances of the same operating system, each running the same set or a different set of applications.

VMware patches virtual machine escape flaw on Windows VMware has released security updates for several of its virtualization products in order to address critical vulnerabilities that could allow attackers to break out of virtual machines and execute rogue code on the host operating systems. The code execution flaws affect the Windows versions of VMware Workstation, VMware Player and VMware Horizon Client. They were discovered by Kostya Kortchinsky of the Google Security Team and stem from a printer virtualization feature that allows a virtual machine's guest OS to access the printer attached to the host computer. "On VMware Workstation 11.1, the virtual printer device is added by default to new VMs, and on recent Windows Hosts, the Microsoft XPS Document Writer is available as a default printer," Kortchinsky explained in an advisory. "Even if the VMware Tools are not installed in the Guest, the COM1 port can be used to talk to the Host printing Proxy."

​VMware sued for failure to comply with Linux license In 2007, top Linux contributor Christoph Hellwig accused VMware of using Linux as the basis for the VMware ESX bare-metal hypervisor, an essential part of VMware's cloud offerings. Years went by and the Software Freedom Conservancy, a non-profit organization that promotes open-source software, claims to have negotiated with VMware for the company to release ESX's code, and its successor ESXi. That way, argued the Software Freedom Conservancy, these programs would legally comply with Linux's Gnu General Public License version 2 (GPLv2). VMware refused in 2014. Ceilometer/blueprints/vmware-vcenter-server Although Nova provides support for VMware vCenter Server, Ceilometer does not. It does not collect metrics of virtual machines deployed on VMware virtualization platform. It will be necessary to extend this support in Ceilometer.