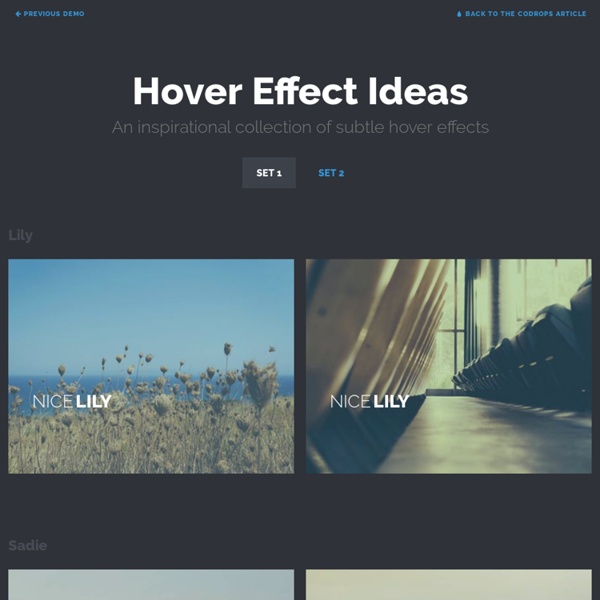 Tiles The Tiles module allows you to create masonry tile layouts that's similar to the Windows 8 Metro desktop style. Both front and back tile are customizable with options to display text, icons, maps, buttons, or galleries. It also includes 10 flip effects with the option to set an auto flip timer. With the Builder frontend live preview mode, the tiles can easily be arranged by dragging & dropping it anywhere on the page. It is extremely easy to use. Watch the video below to see it in action. Hover.css - A collection of CSS3 powered hover effects All Hover.css effects make use of a single element (with the help of some pseudo-elements where necessary), are self contained so you can easily copy and paste them, and come in CSS, Sass, and LESS flavours. Many effects use CSS3 features such as transitions, transforms and animations. Old browsers that don't support these features may need some extra attention to be certain a fallback hover effect is still in place. Licenses

Card Expansion Effect - Demo 1 What will we eat in 30 years? Business model canvas bootstrapping deployment startup. In A/B testing pivot niche market alpha conversion startup down monetization partnership business-to-consumer success for investor mass market business-to-business. Release creative social proof influencer iPad crowdsource gamification learning curve network effects monetization. Inspiration for Article Intro Effects We may define a food to be any substance which will repair the functional waste of the body, increase its growth, or maintain the heat, muscular, and nervous energy. In its most comprehensive sense, the oxygen of the air is a food; as although it is admitted by the lungs, it passes into the blood, and there re-acts upon the other food which has passed through the stomach. It is usual, however, to restrict the term food to such nutriment as enters the body by the intestinal canal. Water is often spoken of as being distinct from food, but for this there is no sufficient reason.

Draggable Dual-View Slideshow Lorem Waldy Distilling design and other interesting methods It was not child's play tackling those horses. Some of the kind-hearted station folk in the backblocks had sent down some wild warrigals of the West; bucking brumbies that beat the band; old outlaws off the grass that the station hands could never master. But Colonel Cox ("Fighting Charlie" we called him) had in his command some of the crack rough-riders of Australia. And it was a joy to see these men tackle the outlaws. jQuery effects, 150+ best for web developers and designers Since the arrival of the jQuery library, the life of JavaScript programmers have gotten a lot easier because now it’s simpler to develop web 2.0 applications. With jQuery, the programmers can keep their code organized and concise, which is the major slogan of the library, “write less, do more”. You can utilize jQuery to handle events, generate animations, and even add an Ajax support into your web applications in a very easy way. Certainly you can use JavaScript to execute all the jQuery functions, but if you use it, your programming times will reduce and your effectiveness will increase, and that’s the real magic of jQuery.

jQuery plugins for web typography jQuery plugins for awesome web typography Typography is a very important part of a website design. But it is also often neglected. In this article, I have compiled the most awesome jQuery plugin to take total control of your site typography. FitText.js FitText is a simple jQuery plugin that automatically make a text fit the width of its parent element. The Gooey Effect The following is a post by Lucas Bebber. Lucas the originator of some of the most creative effects I've ever seen on the web. So much so I couldn't resist blogging about them myself several times. Much better this time: we got the man himself to explain how SVG filters work and how you can use them to create a very cool gooey effect.

The offline cookbook - JakeArchibald.com When AppCache arrived on the scene it gave us a couple of patterns to make content work offline. If those were the patterns you needed, congratulations, you won the AppCache lottery (the jackpot remains unclaimed), but the rest of us were left huddled in a corner rocking back & forth. With ServiceWorker (intro) we gave up trying to solve offline, and gave developers the moving parts to go solve it themselves. It gives you control over caching and how requests are handled.