Seven Blunders of the World 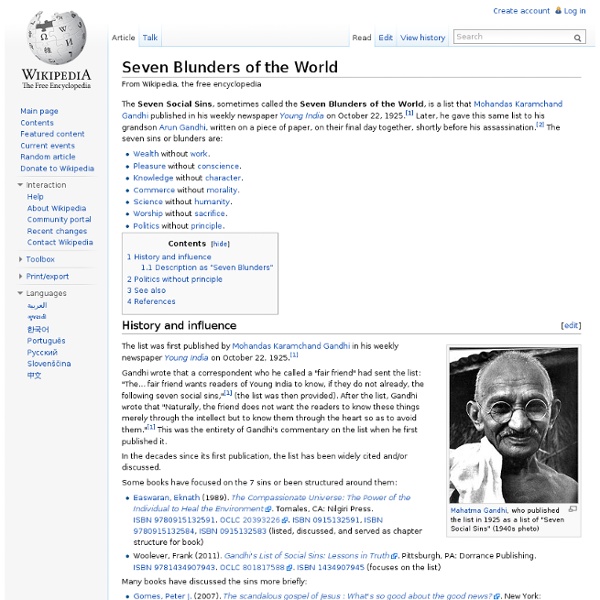 The Seven Social Sins, sometimes called the Seven Blunders of the World, is a list that Mohandas Karamchand Gandhi published in his weekly newspaper Young India on October 22, 1925.[1] Later, he gave this same list to his grandson Arun Gandhi, written on a piece of paper, on their final day together, shortly before his assassination.[2] The seven sins or blunders are: History and influence[edit] Mahatma Gandhi, who published the list in 1925 as a list of "Seven Social Sins" (1940s photo) The list was first published by Mohandas Karamchand Gandhi in his weekly newspaper Young India on October 22, 1925.[1] Gandhi wrote that a correspondent who he called a "fair friend" had sent the list: "The... fair friend wants readers of Young India to know, if they do not already, the following seven social sins,"[1] (the list was then provided). In the decades since its first publication, the list has been widely cited and/or discussed. Easwaran, Eknath (1989). Gomes, Peter J. (2007). See also[edit]

*bellaMUMMA {life is beauty-full}: 100 ways to UNCOMPLICATE YOUR LIFE I 'STUMBLED UPON' THIS POST AT 'LIVE THE CHARMED LIFE' AND I LOVED IT SO MUCH, I JUST HAD TO SHARE IT! It begins... You see, when we’re born we see the world in an uncomplicated way. We know what we need, and we ask for it. We like nice people, and we don’t like mean people. The problem of evil, as described circa 300 B.C. In about 300 B.C., Epicurus eloquently summed up the problem of the existence of evil. It has come to be known as the Riddle of Epicurus or the Epicurean paradox. It was translated by David Hume in the Dialogues concerning Natural Religion: Intellectual Conscience « Agonblog In the course of my long term quest to discover what a philosopher ought to be, I realized, to my (it is not exaggeration to say) horror, that there are a great number of men (†), apparently a majority, who cannot philosophize. The most interesting and penetrating diagnosis of this condition I have ever encountered—by far—was in the writing of Friedrich Nietzsche. In the passage I am thinking of, Nietzsche claims that the great majority of men “lacks an intellectual conscience” — by which he means that they are not affected by the drive (quintessential to philosophers) to be certain in their understanding of the world. This absence of conscience, which I have encountered directly many times in my day-to-day interaction with people, and have noticed lurking in almost all popular writing on philosophical matters, is parallel in severity to the lack of moral conscience that TV and movie sociopaths traditionally exhibit.

Aseity Aseity (from Latin a "from" and se "self", plus -ity) refers to the property by which a being exists in and of itself, from itself, or exists as so-and-such of and from itself.[1] The word is often used to refer to the Christian belief that God contains within himself the cause of himself, is the first cause, or rather is simply uncaused, though many Jewish and Muslim theologians have also believed God to be independent in this way.[1] Notions of aseity as the highest principle go back at least to Plato and have been in wide circulation since Augustine, though the use of the word 'aseity' began only in the Middle Ages.[1] Meaning[edit] Aseity has two aspects, one positive and one negative: absolute independence and self-existence.[1] In its negative meaning, which emerged first in the history of thought, it affirms that God is uncaused, depending on no other being for the source of His existence.

Lost & Found: Comfy Chair Cushioned with Built-In Storage Lighters, keys, coins … cushioned chairs and couches are notorious for nomming all kinds of things that slip out of our pockets or otherwise get left behind and slide into the cracks. This design simply celebrates that existing phenomena, like a giant-sized pin cushion. It may come as no surprised that this clever-but-boxy furniture piece was developed by architectural designers (of Daisuke Motogi Architecture), who have a knack for exposing and expanding uses for classic furnishing types. 7 Lessons From 7 Great Minds Have you ever wished you could go back in time and have a conversation with one of the greatest minds in history? Well, you can’t sorry, they’re dead. Unless of course you’re clairaudient, be my guest. But for the rest of us, we can still refer to the words they left behind.

The Suicide of Socrates, 399 BC The Suicide of Socrates, 399 BC On a day in 399 BC the philosopher Socrates stood before a jury of 500 of his fellow Athenians accused of "refusing to recognize the gods recognized by the state" and of "corrupting the youth." If found guilty; his penalty could be death. The trial took place in the heart of the city, the jurors seated on wooden benches surrounded by a crowd of spectators.

Best Quotes of All Time It’s been three years since we shared our original list of some of the best quotes of all time, and we felt it was a good time for an update. We’ve added another 25 quotes for you. But these aren’t just any quotes. Simple Ideas That Are Borderline Genius Part 5 (18 Pics) Simple Ideas That Are Borderline Genius Part 5 (18 Pics) Jon January 1, 2011 2 For More Simple Ideas That Are Borderline Genius, click HERE. 100 Inspiring Quotes So many people have said so many things so much better than I will ever be able to. Here are 100 of them. I hope you find at least a few that speak to you. If you want to be happy, be. – Leo Tolstoy The best way to cheer yourself up is to try to cheer somebody else up. – Mark Twain Happiness is excitement that has found a settling down place. But there is always a little corner that keeps flapping around. – E.L.