Curiosity: It Helps Us Learn, But Why? : NPR Ed 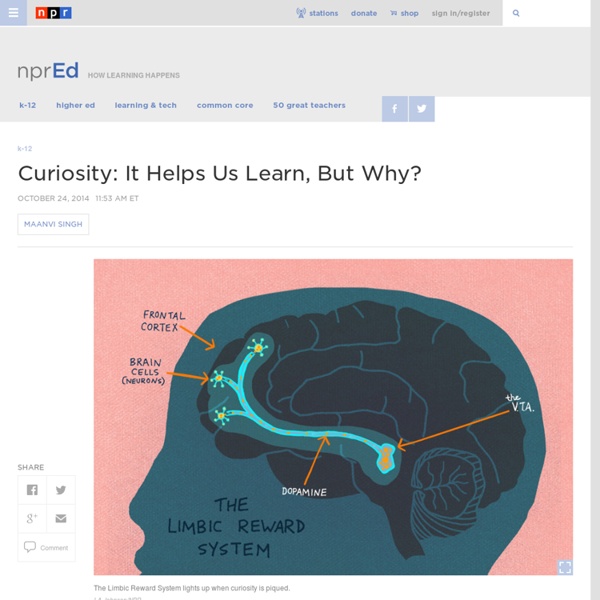 9 Things You Realize After You Die Annie Kagan – OmTimes | Three weeks after he died, my brother Billy woke me at sunrise and began describing what was happening to him in the afterlife. At first I thought that grief was causing me to imagine his voice. But as my brother began sharing cosmic secrets with me, secrets I couldn’t ignore, I became his student. Billy taught me that when you’re born, that big pop gives you a kind of amnesia.

Why Girls Tend to Get Better Grades Than Boys Do These days, the whole school experience seems to play right into most girls’ strengths—and most boys’ weaknesses. Gone are the days when you could blow off a series of homework assignments throughout the semester but pull through with a respectable grade by cramming for and acing that all-important mid-term exam. Getting good grades today is far more about keeping up with and producing quality homework—not to mention handing it in on time. Gwen Kenney-Benson, a psychology professor at Allegheny College, a liberal arts institution in Pennsylvania, says that girls succeed over boys in school because they tend to be more mastery-oriented in their schoolwork habits. They are more apt to plan ahead, set academic goals, and put effort into achieving those goals.

When Emotional Intelligence Goes Wrong “People skills” are almost always assumed to be a good thing. Search employment ads and you will find them listed as a qualification for a startling array of jobs, including Applebee’s host, weight-loss specialist, CEO, shoe salesperson, and (no joke) animal-care coordinator. The notion that people smarts might help you succeed got a boost a quarter century ago, when the phrase emotional intelligence, or EI, entered the mainstream.

Curiosity Kills No Cats – A case for the importance of being curious For some reason, “curiosity” has developed a bad name. To call something curious is to call it an oddity. It’s something peculiar, that can’t, or shouldn’t be, explained. Curiosity kills cats, for god sakes! But, in actuality, curiosity is a very good thing. Identity Explanations > Identity Description | Discussion | See also 'Identity' is both a simple 'me' and a much, much deeper philosophical topic. These are a few pages on this impenetrable subject done during a university course. Identity is...: More than is often thought. Deducing Our Selves: Knowing who we are.

To Advance Education, We Must First Reimagine Society Why haven’t education reform efforts amounted to much? Because they start with the wrong problem, says John Abbott, director of the 21st Century Learning Initiative. Because disaffection with the education system reflects a much deeper societal malaise, it’s imperative that we first figure out what kind of world we really want: a world populated by responsible adults who thrive on interdependence and community, or a world of “customers” who feel dependent on products, services, and authority figures, and don’t take full responsibility for their actions? The answer, he says, will point to the changes needed in all three pillars of education — schools, families, and communities. As Abbott sees it, the need for reflection has never been greater.

Why tidying up could change your life I am stuffing a letter between two books when I realise my possessions are in charge of me. It’s a hoarder’s attempt at tidying: hiding stuff inside other stuff. My coffee table groans under books, digital devices, coffee cups, lint rollers, newspapers and one or both of my kittens, Ollie and Sebastian. Bottles of toiletries line the bathroom mirror collecting dust, and upstairs cubbyholes burst with clothes I no longer wear. Let’s not even talk about my inbox, crammed with unread emails. The Stuff is winning.

The importance of encouraging curiosity in children Shortly after our daughter was born last year, I asked my wife a question. "When she grows up, how do you think she will disappoint us?" Without saying anything, my wife gently extracted our baby from my arms, and held her tightly. "We'll never be disappointed in her, you inhuman bastard."

How to Organize Your Agenda I know it’s only July, but it’s never too early to start getting prepared for the fall semester! One of the best ways to stay organized when classes are in session is by keeping up with a planner. I’m a huge fan of writing everything down – from homework and papers to meetings and events – and I wouldn’t be able to keep track of everything without documenting it in an agenda. If you’re gearing up for a fall, don’t worry – I’ve put together a guide that will help you stay organized with your agenda no matter what your semester holds. Choose Your Agenda Top L-R: VS PINK Student Planner, Lilly Pulitzer Agenda, May Designs MayBook Bottom L-R: Jonathan Adler Agenda, Greenroom Agenda, Erin Condren Life Planner