If you want to follow your dreams, you have to say no to all the alternatives 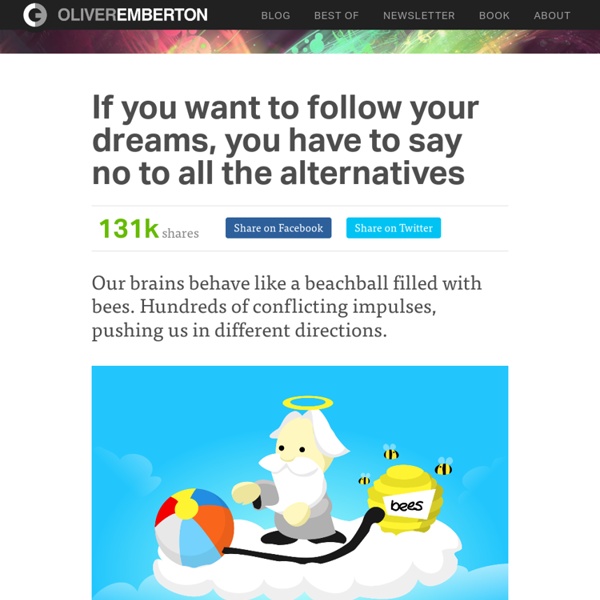 131k shares Share on Facebook Share on Twitter Our brains behave like a beachball filled with bees. Hundreds of conflicting impulses, pushing us in different directions. People never want to do one thing. And so usually, that ball is going nowhere. This is how most people live their lives. Let’s fix that. The curse of the ‘great idea’ Imagine if 20 years ago you were a genius who had the idea of starting up Google, and Amazon, and Facebook. It’s not enough to have great ideas. This is why a committee of smart people is called an “idiot”. How people achieve the impossible Imagine an insanely ambitious goal for yourself. If you absolutely had to do that – if your life and the lives of everybody you cared about depended upon it – how would you? You’d simply drop everything else. Monomaniacal focus on a single goal is perhaps the ultimate success stratagem. Most people aren’t failing because of their potential. How to tame the swarm You will always want to attempt more than you can achieve.

Reinventing Themselves, Without a Net Photo Workstation By HANNAH SELIGSON My husband, who is 34, recently quit his federal government job, where he worked on climate-change issues for four years. The news that he is between jobs has not always gone down well with family members and friends. These days, many people in their 20s and 30s are eager to push themselves into entirely different careers, whether because the economy is telling them to do so, their ambitions are signaling that it’s time for a change, or they’ve been laid off. To cope with living in an interstitial state, young people are cobbling together freelance or contract work, or accepting help from their parents. Jamie Yang, 34, decided that it would be O.K. to quit. According to the Labor Department, adults born in the early 1980s held an average of 6.2 jobs from ages 18 to 26. Sometimes, it takes one of these career interludes to figure out the right path. That seems to be true for my husband, to some degree. Workstation By HANNAH SELIGSON