Rethinking the Placebo Effect: How Our Minds Actually Affect Our Bodies 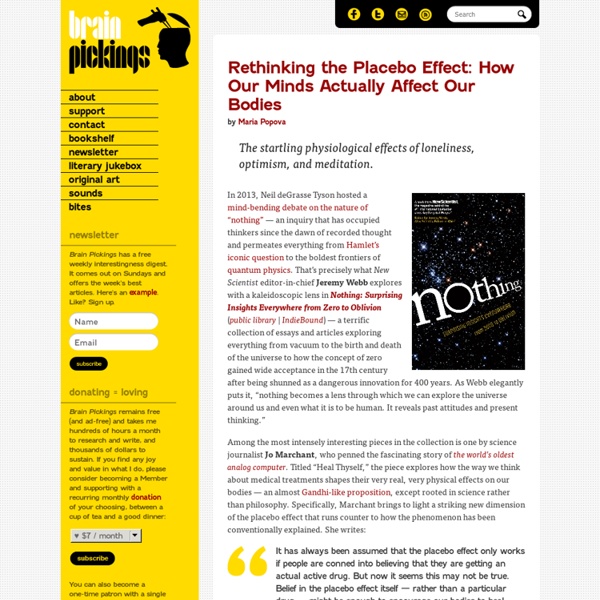 by Maria Popova The startling physiological effects of loneliness, optimism, and meditation. In 2013, Neil deGrasse Tyson hosted a mind-bending debate on the nature of “nothing” — an inquiry that has occupied thinkers since the dawn of recorded thought and permeates everything from Hamlet’s iconic question to the boldest frontiers of quantum physics. That’s precisely what New Scientist editor-in-chief Jeremy Webb explores with a kaleidoscopic lens in Nothing: Surprising Insights Everywhere from Zero to Oblivion (public library | IndieBound) — a terrific collection of essays and articles exploring everything from vacuum to the birth and death of the universe to how the concept of zero gained wide acceptance in the 17th century after being shunned as a dangerous innovation for 400 years. As Webb elegantly puts it, “nothing becomes a lens through which we can explore the universe around us and even what it is to be human. It reveals past attitudes and present thinking.” Donating = Loving

What the Science of “Sleep Paralysis” Reveals About How the Brain Works by Maria Popova How a neurological nightmare illuminates the wondrous workings of the brain-body connection. “In both writing and sleeping,” Stephen King wrote in his meditation on “creative sleep” and the art of wakeful dreaming, “we learn to be physically still at the same time we are encouraging our minds to unlock from the humdrum rational thinking of our daytime lives.” Lucid Dreaming Techniques: A Guide To Lucid Dream Induction Here are my top lucid dreaming techniques for beginners. They range from simple memory exercises (like Reality Checks and Mnemonic Induction of Lucid Dreams) to specialized meditation (like Wake Induced Lucid Dreams). Lucid Dreaming Tutorials For step-by-step tutorials and audio tools for lucid dream induction and exploration, check out my Lucid Dreaming Fast Track study program for beginners and beyond. 52 Ways to Have Lucid Dreams A complete list of 52 ways to have lucid dreams - based on visualization, memory, supplements, sleep cycles and more methods than you can shake a stick at.

Tutelage of Dr KP Buteyko Applying Buteyko Breathing How to interpret breathing exercises All breathing exercises are accompanied by a line diagram. To interpret each diagram, understanding the following is essential: All breathing exercises and the Control Pause, which involves holding the breath, are performed after an exhalation. » Shinrin-yoku: Forest Healing Jeanne Lapsker is a Forest volunteer at NYBG. The leaves of the old rhododendron shrubs hang straight and stiff outside my window—the surest indicator of freezing temperatures. I dress in layers and head out to the forest in NYBG. Going Feral: my one-year journey to acquire the healthiest gut microbiome in the world (you heard me!) Unless you’ve been holed up in a cabin in the Siberian outback, it’s been hard to miss the avalanche of research and associated press coverage ballyhooing the connection between microbes and human health and disease in 2013 – and 2014 will be no different, as fecal transplants become the new black! Name just about any ailment plaguing humanity and you will find some researcher, somewhere, working the microbial angle for a causal or correlative connection. More federal funding please! But reading between the lines of the near breathless and optimistic reporting on the human microbiome, sits a sobering fact: scientists know very little about the connection between disease and the potential microbial culprits (these are early days).

Why Walking Helps Us Think - The New Yorker In Vogue’s 1969 Christmas issue, Vladimir Nabokov offered some advice for teaching James Joyce’s “Ulysses”: “Instead of perpetuating the pretentious nonsense of Homeric, chromatic, and visceral chapter headings, instructors should prepare maps of Dublin with Bloom’s and Stephen’s intertwining itineraries clearly traced.” He drew a charming one himself. Several decades later, a Boston College English professor named Joseph Nugent and his colleagues put together an annotated Google map that shadows Stephen Dedalus and Leopold Bloom step by step. The Virginia Woolf Society of Great Britain, as well as students at the Georgia Institute of Technology, have similarly reconstructed the paths of the London amblers in “Mrs.

Nose Breathing Has Many Benefits Over Mouth Respiration Nose Breathing Breathing through the nose has many benefits. Breathing through the mouth, many negatives. How to Keep Bad Moods From Taking You Over Photo by r.f.m II Well, it happens sometimes. I find myself in a lousy mood. Hard to say where it started, but it certainly has something to do with not getting much sleep Saturday night. I had big plans for Sunday, but the day was compromised by my zombie state.

Doctors who call patients hypochondriacs are committing malpractice Zackary Berger, MD, PhD | Physician | November 25, 2013 There’s one question I get asked a lot: “I research my health problems on the Internet. Am I a hypochondriac?” First, we should ban that word when talking about ourselves. Scientific Proof That Negative Beliefs Harm Your Health The medical establishment has been proving that the mind can heal the body for over 50 years. We call it “the placebo effect,” and we know that when patients in clinical trials get nothing but sugar pills, saline injections, or fake surgeries—but believe they might be getting the new wonder drug or miracle surgery—their bodies get better 18 to 80% of the time. While many are aware of the seemingly mysterious placebo effect, fewer people know about its evil twin, “the nocebo effect.” When I was researching my book Mind Over Medicine: Scientific Proof That You Can Heal Yourself, I became convinced, without a shadow of a doubt, that a combination of positive belief and the nurturing care of the right healer can activate the body’s natural self-repair mechanisms and help the body heal itself. But was the opposite also true? Do negative beliefs about our health or harsh care from insensitive doctors harm the body?