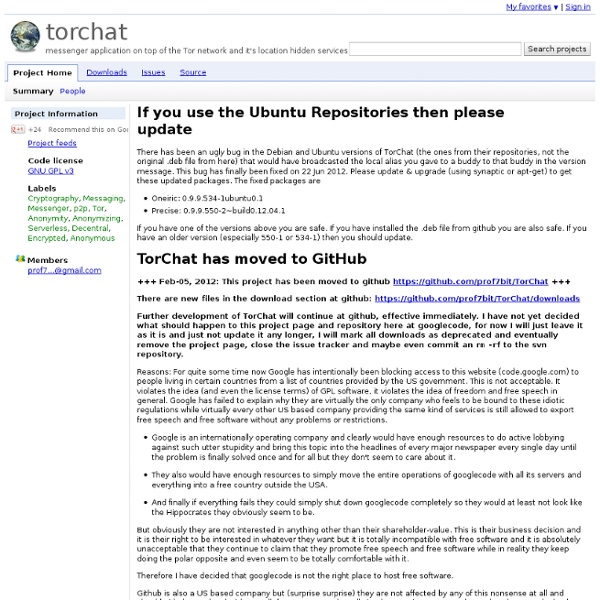 To avoid any potential confusion: This product is produced independently from the Tor® anonymity software, I am not related with or sponsored by torproject.org. TorChat is making use of the Tor® client software and the Windows version comes bundled with original Tor binaries but TorChat itself is a completely separate project developed by different people. TorChat is released as Free Software (GPL). +++ Feb-05, 2012: This project has been moved to github +++ There are new files in the download section at github: Further development of TorChat will continue at github, effective immediately. below is the old project page for historic reasons. If you like this software then maybe you want to buy me a beer. to call for the waiter. Alternatively there is also a BitCoin address: 18hmynLnHC44XiGiiPqfuTL3M4xPeJ5KqW TorChat just runs from an USB drive on any Windows PC. Tor location hidden services basically means: Linux

TorChat TorChat is a decentralized anonymous instant messenger that uses Tor hidden services as its underlying Network. It provides cryptographically secure text messaging and file transfers for business dealings, and confidential communication between doctors and their patients.[1][2] The characteristics of Tor's hidden services take care that all traffic between the clients is encrypted and that it is extremely difficult (if not impossible) to tell who is communicating with whom and where a given client is physically located. In TorChat every user has a unique alphanumeric ID consisting of 16 characters. This ID will be randomly created by Tor when the client is started the first time, it is basically the .onion address of a hidden service. TorChat clients communicate with each other by using Tor to contact the other's hidden service (derived from his ID) and exchanging status information, chat messages and other data over this connection. See also[edit] References[edit] External links[edit]

P2P API Discovered in Latest Builds of Chromium Something called the P2P API can be turned on through the about:flags menu in the latest builds of Chromium, the open source browser that serves as the basis for Google Chrome. The discovery was made by Daniel Cawrey at thechromesource. The description of the option reads: "Enables P2P Pepper API and P2P JavaScript API. The API is under development, and doesn't work yet." For those not familiar, the Pepper Plugin API (PPAPI) is Google's API for its Native Client (NaCl) plugin. The trouble is that Chrome is the only browser with NaCl support, which could lead to Web fragmentation. The main point, however, of NaCl is probably to enable developers to create more advanced applications, such as video editors or audio processors, for ChromeOS. Google has introduced another interesting feature recently: the ability to run Chrome Web Store apps in the background.

Opera "Reinvents the Web" with Unite, Makes Every Computer a Server Opera has been buzzing up our inboxes lately with rather vague press releases on how it planned to "reinvent the web." Well, we've just received concrete confirmation of exactly what that means. Their new product, Opera Unite, "turns any computer into both a client and a server, allowing it to interact with and serve content to other computers directly across the Web, without the need for third-party servers." Opera Unite aims to make hosting and sharing data as simple as navigating around the Internet. It purports to give users greater control of their data while still allowing for easy sharing of files and information between all web-enabled devices. The Unite services are based on open web standards to permit developers to design cutting-edge applications with ease. Unite is now available in the Opera 10 desktop browser from Opera Labs, and services run directly in the browser. "Think of multiplayer games, from simple two-player challenges like Chess up to sprawling RPGs.

Web Real-Time Communications Working Group Charter The mission of the Web Real-Time Communications Working Group, part of the Ubiquitous Web Applications Activity, is to define client-side APIs to enable Real-Time Communications in Web browsers. These APIs should enable building applications that can be run inside a browser, requiring no extra downloads or plugins, that allow communication between parties using audio, video and supplementary real-time communication, without having to use intervening servers (unless needed for firewall traversal, or for providing intermediary services). Scope Enabling real-time communications between Web browsers require the following client-side technologies to be available: Success Criteria To advance to Proposed Recommendation, each specification is expected to have two independent implementations of each feature defined in the specification. Out of Scope The definition of any new codecs for audio and video is out of scope. Deliverables Recommendation-Track Deliverables Media Stream Functions Other Deliverables

This Could be Big: Decentralized Web Standard Under Development by W3C Imagine a web where our browsers connected directly to each other to do voice, video, media sharing and run applications, using P2P and real-time APIs, rather than going through centralized servers that controlled traffic and permissions. That's a potent idea and if implemented properly could future-proof a part of the web from authoritarian crack-downs, disruptions by disasters and more. It could also establish a permanent lawless zone of connected devices with no central place to stop anyone from doing anything in particular. It just so happens that something like that may now be under development in the most official of venues. Below: Here's how Opera described its Unite technology at launch two years ago. The working group is focused on the Application Programming Interfaces (APIs) that devices will use to implement these connections, but is working with an IETF group developing a technical protocol for transmission of the data between browsers.