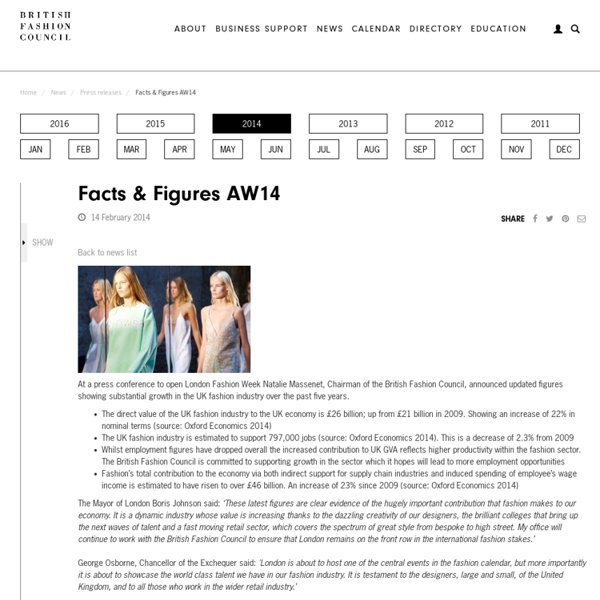 At a press conference to open London Fashion Week Natalie Massenet, Chairman of the British Fashion Council, announced updated figures showing substantial growth in the UK fashion industry over the past five years. The direct value of the UK fashion industry to the UK economy is £26 billion; up from £21 billion in 2009. Showing an increase of 22% in nominal terms (source: Oxford Economics 2014) The UK fashion industry is estimated to support 797,000 jobs (source: Oxford Economics 2014). This is a decrease of 2.3% from 2009 Whilst employment figures have dropped overall the increased contribution to UK GVA reflects higher productivity within the fashion sector. The British Fashion Council is committed to supporting growth in the sector which it hopes will lead to more employment opportunities Fashion’s total contribution to the economy via both indirect support for supply chain industries and induced spending of employee’s wage income is estimated to have risen to over £46 billion.

British Fashion Council The purpose of the British Fashion Council’s digital pillar is to support the British fashion industry to become the world leader in creativity, business and innovation. It is important for the British designer community to drive forward sales and increase their profile on the global stage and innovating digitally is a perfect way to achieve this. The Mayor of London Boris Johnson said: 'I am delighted to support British fashion, which continues to be at the forefront of innovation. From how our designers are working and presenting their collections, to the fast paced dynamism of the retail sector, fashion is utilising the latest technologies to ensure this important industry continues to generate billions for our economy. London is developing a reputation as one of the tech capitals of the world, but it is already a global leader for fashion.' Today, market research firm Mintel has released the following statistics:

The Pros and Cons of Online Retailers vs. Brick-and-Mortar Stores The Pros and Cons of Online Retailers vs. Brick and Mortar Stores Moms love the convenience of online shopping – she can make a purchase in seconds from the comfort of her home. It means no more long lines with the kids in tow, and one less thing to add to her to-do list. However, there are certain in-store experiences that moms cannot get online. For instance, clothing can’t be tried on prior to purchase and toys can’t be felt for durability. Retail Forecast for 2018 - Centre for Retail Research, Nottingham UK Retail in 2018 - Shop numbers, Online and the High Street The Centre for Retail Research published its analysis of how UK retailing will have changed by 2018 on 28 May 2013, entitled Retail Futures 2018 forecasts that by 2018: Total store numbers will fall by 22%, from 281,930 today to 220,000 in 2018. Job losses could be around 316,000 compared to today The share of online retail sales will rise from 12.7% (2012) to 21.5% by 2018 or the end of the decade. There will be a further 164 major or medium-sized companies going into administration, involving the loss of 22,600 stores and 140,000 employees.

95% of British people buy goods via internet retailers In 2013, more than £91 billion was spent online That figure is expected to surpass £100 billion this yearOne in four British people now shop online at least once a week A Sting album - priced at £7.74 - was the first item bought online in 1994 By Thomas Burrows Published: 08:19 GMT, 12 August 2014 | Updated: 11:42 GMT, 12 August 2014 Twenty years since the first item was sold online, 95 per cent of British people are now buying goods via internet retailers.

London on course for another year of record-breaking visitor numbers in 2014 London welcomed over 3.6 million overseas visits in the first three months of 2014, resulting in the best ever first quarter tourism numbers in the city’s history. The figures published today from the latest International Passenger Survey (IPS) show an 8.6 per cent increase on the same period last year, confirming that London is on track to welcome more visitors in 2014 than the 16.8 million that came to the city in 2013 – already a record-breaking year for the capital. Tourist spending over the same period was £2.44 billion, a 14.6 per cent increase compared with the first quarter of last year. The total spend in London’s tourism sector has gone up every quarter for the last two and a half years. These promising figures come just one day after London was crowned the most popular tourist destination in the world by the respected MasterCard Global Cities Index report, putting the city ahead of Bangkok and Paris. Notes to Editors

The fashion business We know that clothing is big business, but it may be surprising just how big. The fashion industry's contribution to the British economy is an estimated £26bn - that's twice the size of the car industry's and nearly as big as the contribution from housing, according to the British Fashion Council. It is not just dresses and handbags, but also design and manufacturing that make the sector the largest part of the so-called creative industries, which include marketing, etc. It's an important part of the services sector that makes up around four-fifths of the economy. Fashion: Impact of The Recession - UK - 2010 : Consumer market research report The clothing sector has survived the recession, with the market growing 1.4% in 2009 to £41.3 billion and by an estimated 1.5% in 2010 to £41.9 billion. While growth was limited due to weakened consumer spending, sales remained in positive territory. Mintel looks at what consumers’ attitudes to spending on clothes have been during this period and what the future holds.

Foreign Tourists Fuelling UK Growth Spend on retail, hospitality and leisure is set to rocket as overseas visitors flock to the UK over the next few years, according to a new report from Barclays. The research, independently commissioned for Barclays' Retail and Hospitality & Leisure banking teams, reveals that spending from foreign tourists is predicted to reach over £27 billion by 2017, an increase of 34% on 2013. Rapid growth in spend among tourists from emerging economies will be further boosted by loosening visa restrictions, and overseas visitors will deliver a significant boost to the economy this year and beyond. Visitors from the US currently spend the most in the UK, followed by France and Germany and this spending pattern will continue through to 2017. However, emerging economies such as China, the UAE and Russia are set to outstrip them in growth terms owing to the increasing wealth of consumers in these countries, in particular their growing middle-classes.

Creating a B2B Marketing Plan [infographic] Many Business-to-business (B2B) companies are already successfully getting great results using marketing tactics like SEO, PPC, landing page creation, social media and email marketing linked to a CRM marketing automation or a simple email auto response system. But often B2B organisations are not getting the most from today's marketing since they don't have a planned approach based on an integrated inbound marketing plan. To create an infographic showing the latest research on how companies are using inbound marketing, we've researched how B2B companies are using digital marketing.

Support for the creative economy (28th November 2012) Written Evidence submitted by the British Fashion Council [SCE 084] This submission is made on behalf of the British Fashion Council (BFC) by Caroline Rush (Chief Executive) and Simon Ward (Chief Operating Officer). The BFC welcomes the opportunity to respond to the Culture, Media and Sport Select Committee’s call for submissions relating to the support for the creative industries. How to Create a B2B Marketing Plan that Drives Results There is a great saying many marketers use, “If you don’t know where you’re going, any road will take you there.” Without a plan, how do you know what you need to do, in priority order, to get there? In these busy times, it is difficult for many to take a pause from everyday work to stop, breathe, focus, and plan. Instead, they rush down any road that looks promising at the moment.