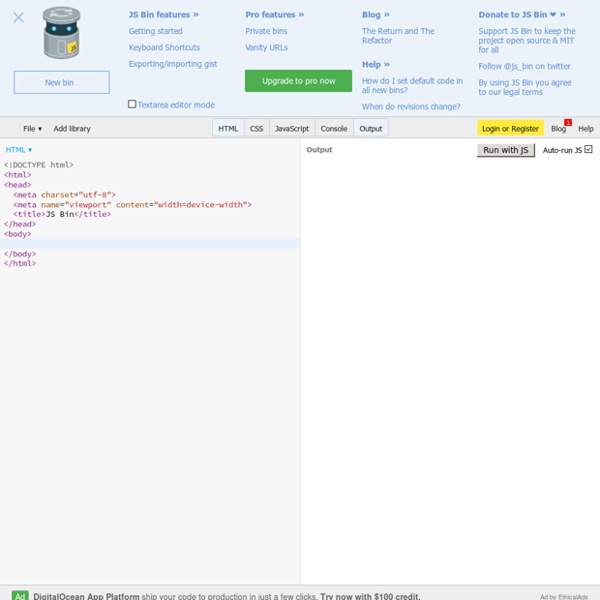 Node.js Embeds Languages: English • Français • Hrvatski • Italiano • 日本語 Nederlands • Português do Brasil • Русский • 中文(简体) • 한국어 • (Add your language) It's super easy to embed videos, images, tweets, audio, and other content into your WordPress site. This feature was added in WordPress 2.9 [1] Usage To embed a video or another object into a post or page, place its URL into the content area. For example: Check out this cool video: WordPress will automatically turn the URL into a YouTube embed and provide a live preview in the visual editor. Another option is to wrap the URL in the [embed] Shortcode. [embed width="123" height="456"] If WordPress fails to embed the URL, the post will contain a hyperlink to the URL. oEmbed The easy embedding feature is mostly powered by oEmbed, a protocol for site A (such as your blog) to ask site B (such as YouTube) for the HTML needed to embed content from site B. Does This Work With Any URL? No, not by default. Notes

適合python入門 CSS Cascading Style Sheets (CSS) is a stylesheet language used to describe the presentation of a document written in HTML or XML (including XML dialects such as SVG, MathML or XHTML). CSS describes how elements should be rendered on screen, on paper, in speech, or on other media. CSS is among the core languages of the open web and is standardized across Web browsers according to W3C specifications. Previously, development of various parts of CSS specification was done synchronously, which allowed versioning of the latest recommendations. You might have heard about CSS1, CSS2.1, CSS3. From CSS3, the scope of the specification increased significantly and the progress on different CSS modules started to differ so much, that it became more effective to develop and release recommendations separately per module. Key resources CSS Introduction If you're new to web development, be sure to read our CSS basics article to learn what CSS is and how to use it. CSS Tutorials CSS Reference Get started Tutorials