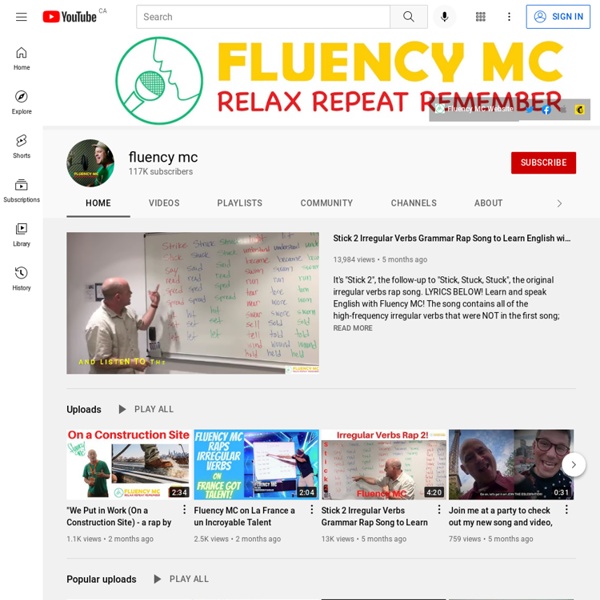 Start Here – RealLife English You’ll find that RealLife has A LOT of to offer. This page is your map and introduction to all the different aspects of this movement, so you can take full advantage of all of our resources and learning materials. With the RealLife Blog, we’ve published over 500,000 words (in 6 languages), 24 hours of audio learning material, and 5 hours of video lessons. The RealLife Global Movement, on the other hand, has brought together tens of thousands of teachers and learners, both online an in-person, all with a mission to inspire, empower, and connect the world through English. This page will introduce you to all the different resources RealLife has to offer, including: We recommend you start out by clicking articles Top Articles, where you will find the top 15 articles we think every visitor should read, PLUS all of our best video and text articles organized by topic (pronunciation, vocab, grammar, slang, etc).

Back-to-the-Future tense: Big Bang Theory and Douglas Adams on time travel, verbs, and grammar Still from The Big Bang Theory, Episode 164 A recent episode of The Big Bang Theory shows Sheldon, Leonard, Raj, and Howard watching Back to the Future, Part II and discussing the appropriate tense to use when talking about something that happened in an alternate past timeline. Here's the scene, with a transcript via Harrison Tran. Howard: Wait, hold on. Found Poetry with Rap Albums What is hip-hop if not poetry? Using poems in class is something that I do not try often enough, but I was inspired to create a found poetry lesson by The Teacher James. The premise of this activity is simple enough: use album titles to make a short, simple poem. You may use any genre of music, but of course, this post will focus exclusively on some of my favorite hip-hop records. There are a number of ways teachers can use this in class. Found poetry can be a great stand-alone activity, especially for warm ups or time fillers, but they can also be the main task of a lesson.

Steven Pinker Identifies 10 Breakable Grammatical Rules: "Who" Vs. "Whom," Dangling Modifiers & More We’ve previously featured Harvard cognitive scientist Steven Pinker discussing writing at a Harvard conference on the subject. In that case, the focus was narrowly on academic writing, which, he has uncontroversially claimed, “stinks.” Now—“not content with just poaching” in the land of the scribes, writes Charles McGrath at The New York Times Sunday Book Review—Pinker has dared to “set himself up as a gamekeeper” with a new book—The Sense of Style: The Thinking Person’s Guide to Writing in the 21st Century. The grandiose title suggests to McGrath that the scientist intends to supplant that most venerable, and most dated, classic writer’s text by Strunk and White.

Regular + Irregular verbs Regular + irregular verbs exercises Regular verbs: past simple and past participle 1. The regular past simple tense in the English language is usually formed by -ed ending (work - worked, stay - stayed). Quiz your English Key features: Go head-to-head with other players from around the world, challenge your friends through social media, and quiz your English language skills.Battle it out over a range of general English topics and grammar, or brush up ready for your test by selecting an exam-specific topic.Earn Achievements as you progress - how far can you go?Play for free, or make in-app purchases to reveal exclusive new content packs.Content developed by Cambridge Assessment English, the producer of IELTS. Exam level: A2 Key, A2 Key for Schools, B1 Preliminary, B1 Preliminary for Schools, B2 First, B2 First for Schools, C1 Advanced, and IELTS 4.0 - 6.5 CEFR level: A1–C1 Skills practised: Vocabulary and grammar Empower, and Grammar and Beyond content, produced by Cambridge University Press Download free now on Android and iOS.

Buffalo 2nd-graders learn grammar by correcting NFL players' tweets Second-graders at Buffalo, New York’s Elmwood Franklin School took a break from practicing addition and learning about George Washington last week and jumped into an unusual spelling and grammar lesson: correcting NFL players’ typo-filled tweets. San Francisco 49ers cornerback Chris Culliver, who also made headlines this week with an anti-gay remark, attracted the students’ attention by writing on Twitter that “I pray to God I’m never dieing broke” [sic]. A fan tweeted back: “Ask him for spellcheck while you’re at it.” The kids, however, fixed the mistake and proudly held up their corrected posterboard for a Facebook photo. The students “applied their lessons in proper sentence structure, noun and verb usage, spelling, and punctuation to correct the tweets of professional football players,” the school’s official Facebook page said. “The students partnered in groups and together found several mistakes in these tweets, including the incorrect spelling of ‘a lot.’”