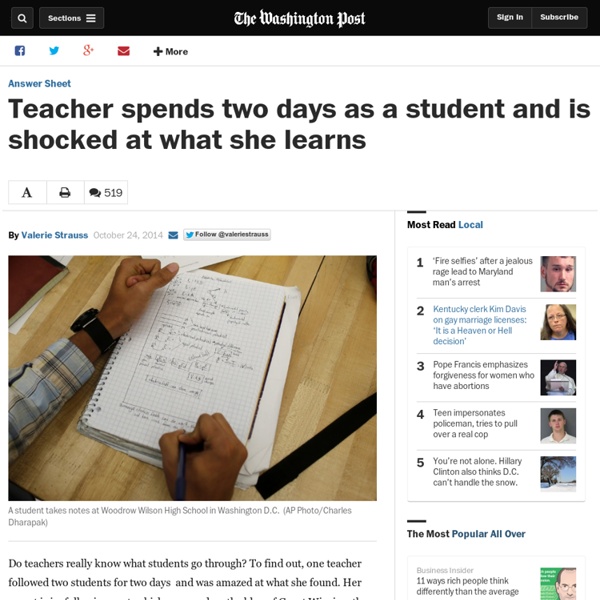 A student takes notes at Woodrow Wilson High School in Washington D.C. (AP Photo/Charles Dharapak) Do teachers really know what students go through? To find out, one teacher followed two students for two days and was amazed at what she found. Her report is in following post, which appeared on the blog of Grant Wiggins, the co-author of “Understanding by Design” and the author of “Educative Assessment” and numerous articles on education. A high school teacher for 14 years, he is now the president of Authentic Education, in Hopewell, New Jersey, which provides professional development and other services to schools aimed at improving student learning. Wiggins initially posted the piece without revealing the author. By Alexis Wiggins I have made a terrible mistake. I waited 14 years to do something that I should have done my first year of teaching: shadow a student for a day. My class schedules for the day (Note: we have a block schedule; not all classes meet each day): 7:45 – 9:15: Geometry

16 skills students need to learn today to thrive tomorrow The gap between the skills people learn and the skills people need is becoming more obvious, as traditional learning falls short of equipping students with the knowledge they need to thrive, according to the World Economic Forum report New Vision for Education: Fostering Social and Emotional Learning Through Technology. Today's job candidates must be able to collaborate, communicate and solve problems – skills developed mainly through social and emotional learning (SEL). Combined with traditional skills, this social and emotional proficiency will equip students to succeed in the evolving digital economy. What skills will be needed most?

Woman Endures Endless Catcalls During 10 Hour Walk In NYC: Gothamist A woman wearing jeans and a crewneck t-shirt walked around NYC for ten hours with a hidden (to everyone else) camera fixed on her. Below is the result, which features a greatest hits of catcalls, like: "Smile!" and "Hey baby!" Also featured is the most infuriating catcall of all: "Somebody's acknowledging you for being beautiful—you should say thank you!" Ladies whenever will we learn to smile and thank our street harassers?

3 Big Don’ts When Converting Instructor-Led Training to eLearning With benefits like automation, consistent messaging, wider reach, and the ability to provide 24/7 learning, eLearning is an option that more and more companies have started to embrace. But now what do you do with those PowerPoint slides that you created ages ago and had been delivering to your employees since then? If that training program is effective, don’t ditch it. You can convert it into an eLearning program without reinventing the wheel. Liz Obert: Dualities looks at the hidden and visible worlds of people living with mental illness (PHOTOS). Liz Obert For many years, Liz Obert woke up, got dressed, went to work, and acted as if everything was fine. Once she returned home, however, she found herself lying around depressed, feeling hopeless and full of dread. Diagnosed in her early 20s with depression, Obert said she tried therapy and medication, but nothing seemed to work until around five years ago when a psychiatrist diagnosed her with bipolar II disorder and put her on mood stabilizers.

Why Your Students Don't Remember What You Teach - Why Your Students Don’t Remember What You Teach: The Overwhelming Power Of ‘Place’ In Learning by Terry Heick A decent question: Why don’t your students remember what you’ve taught? If you’re lucky enough to earn a living from your art, you’re probably white The paints might be colorful, but the professionals, generally speaking, are not. (Wally Santana/AP Photo) The thing about racial diversity among working artists in America is that it pretty much doesn't exist. Nearly four out of every five people who make a living in the arts in this country are white, according to an analysis of 2012 Census Bureau data by BFAMFAPhD, a collective of artists dedicated to understanding the rising cost of artistry.

How Teachers Can Become Fluent in Classroom Technology During one of our last leadership team meetings this past school year, we reflected on our use of digital portfolios to house student work. We had a lot to celebrate: We had found a digital tool to capture student learning, Evernote, a cloud-based note-taking app. No one felt much pressure to be the best at using technology. Parent feedback, although limited in the initial stages of this project, was very positive.

Whites riot over pumpkins in NH and Twitter turns it into epic lesson about Ferguson Police were forced to descend on Keene, New Hampshire Saturday night after students and outside agitators turned the city’s 24th annual Pumpkin Festival into “a destination for destructive and raucous behavior.” Those words — spoken by Keene State College President Anne Huot to CNN — only begin to describe the scene, which led to dozens of arrests and hospitalizations. One rioter, Steven French, told the Keene Sentinel that he traveled from Haverhill, Massachusetts to attend the festival because he knew it would be “f*cking wicked.”

A Quick Guide To Questioning In The Classroom A Guide to Questioning in the Classroom by TeachThought Staff This post was promoted by Noet Scholarly Tools who are offering TeachThought readers 20% off their entire order at Noet.com with coupon code TEACHTHOUGHT (enter the coupon code after you’ve signed in)! Get started with their Harvard Fiction Classics or introductory packages on Greek and Latin classics. The only guide to Gamergate you will ever need to read Anita Sarkeesian, the feminist writer and media critic who has been attacked in “Gamergate.” (Feminist Frequency/Flickr) Gamergate, the freewheeling catastrophe/social movement/misdirected lynchmob that has, since August, trapped wide swaths of the Internet in its clutches, has still — inexplicably! — not burned itself out. Late last week, when many of us thought we’d seen its end, the mob drove yet another woman from her home: This one, Brianna Wu, because she dared to tweet some jokes about the ongoing drama.

5 Ways to Help Your Students Become Better Questioners The humble question is an indispensable tool: the spade that helps us dig for truth, or the flashlight that illuminates surrounding darkness. Questioning helps us learn, explore the unknown, and adapt to change. That makes it a most precious “app” today, in a world where everything is changing and so much is unknown. And yet, we don’t seem to value questioning as much as we should. City ends reserved soccer at Mission Playground after Dropbox flap The San Francisco Recreation and Park Department has decided to end reserved adult play at Mission Playground — the site of a video-recorded confrontation between tech workers and locals that went viral — after meeting with a group of neighborhood kids on Wednesday, according to department director Phil Ginsburg. Ginsburg said park officials met with a combination of kids and youth soccer advocates and came to the conclusion that, in this instance, the need for unstructured play on weekday evenings outweighed the desire to accommodate adults. “The most compelling suggestions came from the kids who said, ‘This is a safe place we can come and play and we feel like we need more time,’” said Ginsburg. “Our first priority is kids. We are always striving to balance different types of play.”

5 Powerful Questions Teachers Can Ask Students My first year teaching a literacy coach came to observe my classroom. After the students left, she commented on how I asked the whole class a question, would wait just a few seconds, and then answer it myself. "It's cute," she added. Um, I don't think she thought it was so cute. Addicting Info – Rich Guys Try To Kick Poor Kids Off Their Own Playing Field, Get A Life Lesson Instead (VIDEO) This is what happened when a group of wealthy, white tech workers in San Francisco attempted to kick a group of local kids off their playing field — they got a life lesson they’ll never forget. The Mission Playing Field, enjoyed for decades as a shared public space, is being privatized by San Francisco Parks & Recreation in collusion with the private City Fields Foundation. Without community approval, the private foundation decided to issue costly permits to use the small traditional pick-up soccer field. So, the inevitable happens and the entitled show up and try to kick the neighborhood kids off of the field at prime time without even showing their “permit.”