What Is Philosophy For? A Beautiful Animated Manifesto for Undoing Our Unwisdom, Cultivating Our Character, and Gaining Perspective 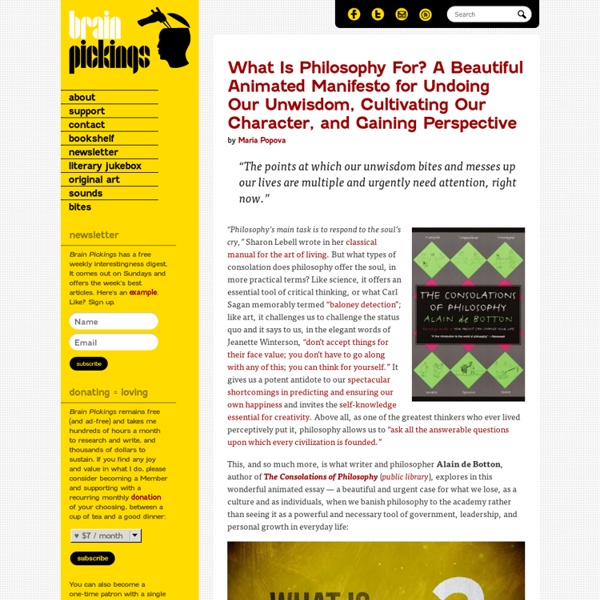 A History of Ideas: Animated Videos Explain Theories of Simone de Beauvoir, Edmund Burke & Other Philosophers The UK’s Open University has become a dependable source of very short, online video introductions to all sorts of things, from weighty subjects like religion, economics, and literary theory to lighter, but no less interesting fare like the art and science of bike design. With breezy tone and serious intent, their animated “60-Second Adventures” make seemingly arcane academic ideas accessible to laypeople with no prior background. Now they’ve teamed up with writer and BBC broadcaster Melvyn Bragg of In Our Time fame for a series of video shorts that run just a little over 60 seconds each, with animations by Andrew Park of Cogni+ive, and narration by comedic actor Harry Shearer from Spinal Tap, The Simpsons, and, most recently, Nixon’s the One. Drawn from Bragg’s BBC 4 radio program “A History of Ideas,” the shorts introduce exactly that—each one a précis of a longstanding philosophical problem like Free Will vs. Related Content: 120+ Free Online Philosophy Courses

Eastern Philosophy Explained with Three Animated Videos by Alain de Botton's School of Life “Among the founders of religions,” writes Walpola Rahula in his book What the Buddha Taught, “the Buddha…was the only teacher who did not claim to be other than a human being, pure and simple. […] He attributed all his realization, attainment and achievements to human endeavor and human intelligence.” Rahula’s interpretation of Buddhism is only one of a great many, of course. In some traditions, the Buddha is miraculous and more or less divine. Born the son of a wealthy Indian king and destined for greatness by a prophecy—or so the story goes—Siddhartha Gautama, the future Buddha, discovered human suffering during brief excursions from his palace. Most of what de Botton does in his introduction to the Buddha will be familiar to anyone who has taken a comparative religions class. Daoism is often intertwined with Buddhism and Confucianism, but its own particular philosophy is distinct from either tradition. All of the videos here are part of the School of Life’s “Curriculum.”

Against happiness: Why we need a philosophy of failure In Hawaii, people are expected to be too happy. Is Britain going the same way? © Hakilon While in Hawaii on a quest for the perfect wave, I once bumped into a psychiatrist who asked me where I came from. It turned out that she was a specialist in depression. She pointed out to me that: (1) In Hawaii the same ratio of people are depressed as anywhere else; (2) The problem with Hawaii is that you are expected to be happy—by idiots like me, for example—so that when you are depressed, you are not just depressed, you feel guilty about being depressed too, so you’re doubly screwed; (3) And, finally, because Hawaii is technically the United States too, if you’re depressed, guilty and broke as well, when you’re supposed to be affluent, then you’re in triple trouble. “Yep,” she concluded, “Hawaii really sucks.” But the spread of depression is partly a side-effect of our addiction to happiness. Freud himself didn’t actually say that Hawaii sucks, but he came close.

Three Minute Philosophy THREE MINUTE PHILOSOPHY is an animated web series designed to explain philosophical ideas in a way that even your Mum can understand them. Each video will explore the ideas of one or two philosophers and their impact on the tradition of thought in approximately three minutes. We're working chronologically here so if you're still holding out for Nietzsche then it's probably wise to defer your degree and take a holiday in Scotland or somewhere. Heraclitus and Parmenides Two guys who butted heads in really ancient Greece about the nature of time and physical reality. Plato Pretty much the most influential philosopher of all time. Empedocles Certifiable nutcase, wannabe cult leader, and unknowingly the precursor to the entire history of science until pretty much this day. Epicurus and Zeno Epicurus and Zeno were the competing leaders of the two most influential moral systems of all time, Epicureanism and Stoicism.

9 Mind-Expanding Books Of Philosophy That Are Actually Readable (A Guide To Practical Philosophy) Very few people wake up and think “I need philosophy.” This is perfectly understandable. But of course, everyone has their own problems and are dealing with the difficulties of life in some way or another. The irony is this is actually what ancient philosophy was intended to ameliorate. “Vain is the word of a philosopher,” Epicurus once said, “which does not heal the suffering of man.” Centuries later, Thoreau expressed this same thought: “To be a philosopher is not merely to have subtle thoughts, nor even to found a school . . . it is to solve some of the problems of life, not only theoretically, but practically.” Suffering might be a strong word to describe most our travails in love, in business, with our egos, with our urges, with our jerk of a neighbor who keeps stealing our parking space. Whatever problem you’re facing right now, someone else probably already went through it. Meditations by Marcus Aurelius Meditation is perhaps the only document of its kind ever made.

Don’t try to cure anxiety: we need it – Charlie Kurth At a dinner party, you find yourself seated next to a man named Sam. He’s a new acquaintance, but it turns out the two of you have several friends in common – so you’re keen to make a good impression. On that score, things seem to be going quite well. The talk is flowing and your companion gives every sign of finding you witty and engaging. And then, all of a sudden, the mood turns a little sour. Popular now The appeal of ISIS isn’t so far from that of Tolkien How bad experiences in childhood lead to adult illness Was the evolution of our species inevitable or a matter of luck? It’s strange, but Sam’s cooling attitude delivers a shock to your system. But just how bad is anxiety, really? Immanuel Kant suggested an even graver problem with anxiety: it is incompatible with virtue. This picture of anxiety as a dark and pernicious force certainly has illustrious supporters. Daily Weekly What might our little dinner party story tell us about this puzzling emotion? Let’s look at another scenario.

Science Codex | Science news, science articles, all day, every day Stoicism /  Getting Stronger Hormetism is a practical set of tools that can help you lose weight, get fit, or even improve your eyesight. But thinking of it as just “as set of tools” actually undervalues the benefits of Hormetism, because it leaves out the greatest benefit: a path to freedom from stress and a means of increasing your physical, mental and spiritual strength. Hormetism is at once a broad perspective on living and a specific set of techniques that can free you from distractions and foster your ability to focus on the important things in life–even the most challenging ones–with greater engagement and joy, and with less distraction from negative emotions such as anger, fear, worry, and the other negative manifestations of stress. But did Hormetism come out of nowhere, or are there historical precedents? Epictetus was a prominent Stoic philosopher who lived from 55-135 AD in Greece, and later in Rome. Irvine’s account of Stoicism. Tranquility. Meditation. Training through voluntary discomfort.

Your Journey Begins - DNA Ancestry Project Participation is simple. Begin by ordering a public Participation Kit. Your kit will arrive in the mail and contains four swabs. Once you receive your results, your genetic journey begins. Why Study Philosophy? 'To Challenge Your Own Point of View' At a time when advances in science and technology have changed our understanding of our mental and physical selves, it is easy for some to dismiss the discipline of philosophy as obsolete. Stephen Hawking, boldly, argues that philosophy is dead. Not according to Rebecca Newberger Goldstein. Goldstein’s forthcoming book, Plato at the Googleplex: Why Philosophy Won’t Go Away, offers insight into the significant—and often invisible—progress that philosophy has made. You came across The Story of Philosophy by Will Durant as a kid. I grew up in a very religious Orthodox Jewish household and everybody seemed to have firm opinions about all sorts of big questions. When did your formal education in philosophy start? I didn’t think I was going to study philosophy. What did your religious family think about your pursuit of philosophy? It made my mother intensely uncomfortable. How early do you think children can, or should, start learning about philosophy? I started really early with my daughters.