How cultures around the world make decisions 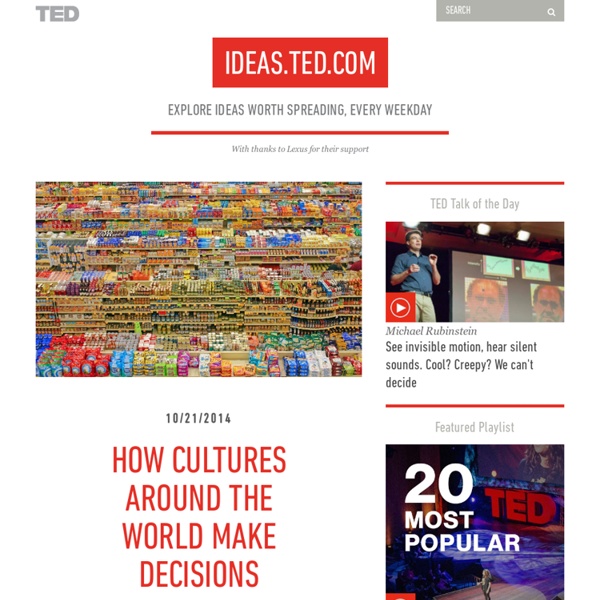 Sit down at a restaurant in France, and there’s a menu. Salmon with rice. French beans. Wine. If you ask for potatoes instead of rice, the restaurant will say no. Because it is their menu. One American model: Give me personal autonomy or give me death. “In terms of fetishizing the idea of choice, the U.S. is the absolute pinnacle,” says Barry Schwartz, professor of social theory and social change at Swarthmore College and author of The Paradox of Choice. We want to be able to choose everything that matters, as well as the things that don’t. Rice and potatoes aside, the American desire for choice has manifested in numerous ways: politically, in a demand for a voice in governance; commercially, in the demand for a variety of consumer goods and services; and spiritually, in the demand to choose and create exactly the kind of individual life, and self, you believe in. The AMerican cultural responsibility to revere choice has been Present since before America was America. Why?

Jessica Chastain: Hollywood has a diversity problem 23 January 2015Last updated at 00:25 ET By Tim Masters Arts and entertainment correspondent, BBC News Jessica Chastain: "I'm part of the industry so I'm part of the problem" Actress Jessica Chastain talks about Hollywood's need to address the issue of diversity, and admits: "I have a capacity to overwork." Chastain received a special honour at the 2015 Critics' Choice Awards in Hollywood last week. Picking up her award on what was the birthday of civil rights campaigner Martin Luther King, the Zero Dark Thirty and Interstellar star used her acceptance speech to urge those in the room to "stand together against homophobic, sexist, misogynistic, anti-Semitic and racist agendas".

Build a Website Watch our latest ad Instrument – Squarespace Customer Matthias Heiderich – Squarespace Customer Mario Hugo – Squarespace Customer Lily + Spice Interiors – Squarespace Customer Quills Coffee – Squarespace Customer There Are No Shortcuts in Product Development — or in Life by Jason Hreha In the past few weeks, I’ve noticed a strangely ubiquitous pattern: an obsession with what I would call “advanced features”, and a nearly complete disregard of what I would consider “basics”. This all started when I downloaded a couple of new apps for my iPhone. How Popular Music's Lyrics Perpetuate American Idiocy Claire Bernish (ANTIMEDIA) A recent study served to confirm the patently obvious: song lyrics for the most popular genres of music are ridiculously obtuse — and getting worse over time. Though this might not be a revelation, the figures are distressing indicators of both an intellectually vapid societal and cultural future as well as its apparent inevitability. If you’ve already moved away from Billboard music, congratulations, you refuse to be insulted. But if you haven’t, or if you’re concerned about pop culture trends acting as portents of systemic dysfunction, you should probably pay attention. Andrew Powell-Morse of SeatSmart studied the “Lyric Intelligence” of 225 Billboard songs in the Pop, Country, Hip-hop, and Rock genres that spent three or more weeks parked at the top of the charts to analyze any changes over the course of ten years.

Shia LaBeouf collaborator: I don’t think you need a sign saying ‘Don’t murder the artist’ Shia LaBeouf’s shock revelation last week that he was whipped, stripped and raped by a woman in Los Angeles on Valentine’s Day has become one of the most talked-about celebrity stories of the year. The confession was all the more extraordinary for the seemingly bizarre circumstances of the alleged assault. It took place while the actor was performing in a gallery, as part of a collaboration with two young artists, with a paper bag over his head inscribed with the legend “I am not famous anymore”. A media storm erupted as cynicism about contemporary art and celebrity culture collided with stereotypes about sexual assault; columnists, bloggers and social media users clashed over whether the alleged crime was a publicity stunt or part of the performance art. Over the past year, LaBeouf’s entire life has seemed like it might be an act. Now matters have become more serious.

Xmax - One page Portfolio Blogger Template Xmax is a multi-purpose one page Blogger template. It suites pretty much every taste of people who want to show their portfolios or a company product introductory service. If you are a developer who develops Apps for iPhone or Android, you can also use this template to represent them with a sparkling design that attracts. This theme comes with quality features and functionalities including stick header, featured posts, slider, location maps and etc. It is mobile compatible and works brilliantly on all devices. Also if you are looking for a top-notch template for portfolio site consider it.

DESIGNING *for humans: Ethnography I don't believe in "mission statements", but if Designing for Humans had one, it might be "to realize the application of emerging technologies in support of design research". While I discuss various technologies, many are specialized or several years away from general applicability. But I recently learned of the LiveScribe smartpen, and I can honestly say this is a technology that can have a valuable, near term impact for virtually all researchers. The device is an electronic pen set to launch in the first quarter of 2008.

Forget Facebook, Abandon Instagram, Move To A Village By Diane Cole / npr.org In the parts of the world that we cover in our blog, many people live in villages. Villages have their problems, to be sure. There may not be a doctor or clinic nearby. Girls may not be able to go to school. Clean water might be a long walk away. London's garden bridge: the public park where groups and cyclists aren't welc... “It will set hearts racing and calm troubled minds,” according to the garden bridge’s chief promoter, Joanna Lumley. “It will enchant everyone who uses it.” But not, it turns out, if you’re in a group of eight or more, or if you want to ride a bicycle, or visit Thomas Heatherwick’s bridge by night – and certainly not if you’re planning a protest. Having received planning permission from Lambeth council last week – the first hurdle in a process that will be followed by Westminster’s decision next month, before swooshing across the mayor’s lubricated planning desk then passing under the nose of Eric Pickles – a series of conditions has emerged that make the project look rather less public than first imagined. “All groups of eight or more visitors would be required to contact the Garden Bridge Trust to request a formal visit to the bridge,” states Lambeth council’s planning report to its committee, which recommends conditional planning.