There's More to Life Than Being Happy 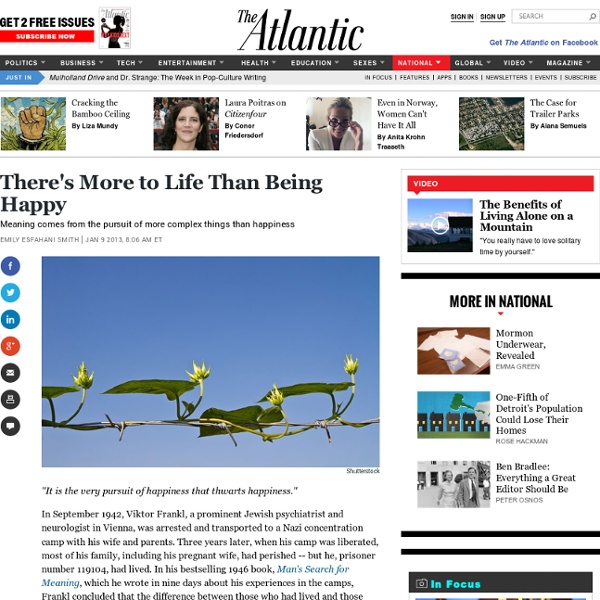 Shutterstock "It is the very pursuit of happiness that thwarts happiness." In September 1942, Viktor Frankl, a prominent Jewish psychiatrist and neurologist in Vienna, was arrested and transported to a Nazi concentration camp with his wife and parents. Three years later, when his camp was liberated, most of his family, including his pregnant wife, had perished -- but he, prisoner number 119104, had lived. As he saw in the camps, those who found meaning even in the most horrendous circumstances were far more resilient to suffering than those who did not. Frankl worked as a therapist in the camps, and in his book, he gives the example of two suicidal inmates he encountered there. This uniqueness and singleness which distinguishes each individual and gives a meaning to his existence has a bearing on creative work as much as it does on human love. Viktor Frankl [Herwig Prammer/Reuters] This is why some researchers are cautioning against the pursuit of mere happiness. Related:  meaning of life • psychology just interesting things • Mental health

30 Things To Stop Doing To Yourself To quote Maria Robinson, “Nobody can go back and start a new beginning, but anyone can start today and make a new ending.” This couldn’t be any closer to the truth in my opinion. However, before a transformation can begin, you have to stop yourself from doing the things that have been holding you back and preventing your transformation. Stop spending time with the wrong people. – Life is too short to spend time with people who suck the happiness out of you. Stop running from your problems. – Face them head on. Stop lying to yourself. – You can lie to anyone else in the world, but you can’t lie to yourself. Stop putting your own needs on the back burner. – The most painful thing is losing yourself in the process of loving someone too much, and forgetting that you are special too. Stop trying to be someone you’re not. – One of the greatest challenges in life is being yourself in a world that’s trying to make you likeeveryone else. This article was written by Marc And Angel!

Addiction is not a disease: A neuroscientist argues that it’s time to change ... The mystery of addiction — what it is, what causes it and how to end it — threads through most of our lives. Experts estimate that one in 10 Americans is dependent on alcohol and other drugs, and if we concede that behaviors like gambling, overeating and playing video games can be addictive in similar ways, it’s likely that everyone has a relative or friend who’s hooked on some form of fun to a destructive degree. But what exactly is wrong with them? For several decades now, it’s been a commonplace to say that addicts have a disease. However, the very same scientists who once seemed to back up that claim have begun tearing it down. Once, addictions were viewed as failures of character and morals, and society responded to drunks and junkies with shaming, scolding and calls for more “will power.” Much of the potency of AA comes from its acknowledgement that willpower isn’t enough to beat this devil and that blame, rather than whipping the blamed person into shape, is counterproductive.

Mental illness mostly caused by life events not genetics, argue psychologists “And yet it detracts from the fact that when unemployment rates go up in a particular locality you get a measurable number of suicides. “It detracts from the idea that trauma in childhood is a very very powerful predictor of serious problems like experiencing psychotic events in adult life, so of course the brain is involved and of course genes are involved, but not very much, and an excessive focus on those issues takes us away from these very important social factors” Unemployment and childhood trauma are to blame for many mental disorders Photo: Alamy Almost half of adults will suffer from a mental health condition at some stage in their life and more than a third of GP surgery consultations are due to mental problems. One in four people have been diagnosed with some type of mental health problem - most commonly depression. In addition, 18 per cent said they had suffered from such illness, but never been diagnosed. “It is impossible to get funding to look at these kind of things.”

My Teacher Is a Monster: A Sweet Modern Fable About Seeing Through the Othern... by Maria Popova A gentle illustrated reminder that we can’t love what we don’t know. “Love,” wrote Leo Tolstoy in his poignant letters to Gandhi on why we hurt one another, “represents the highest and indeed the only law of life, as every man knows and feels in the depths of his heart (and as we see most clearly in children)…” Tolstoy believed that if only we managed to see through our superficial differences and our fear of the other’s otherness, we’d recognize instantly the universe’s basic “law of love” — something to which we are born attuned, only to forget as we enter adulthood. From children’s book author and illustrator Peter Brown comes My Teacher Is a Monster! In vibrant, textured illustrations and simple words, Brown tells the story of little Bobby, who sees his stern teacher, Ms. Suddenly, the leisurely environment strips them of their weekday roles. Just as Bobby makes the first move with a compliment on Ms. The hat, it turns out, is Ms. Bobby decides to show Ms.

Are you to blame for your child's mental health issues? DrugFacts: Treatment Approaches for Drug Addiction | National Institute on Drug Abuse (NIDA) NOTE: This fact sheet discusses research findings on effective treatment approaches for drug abuse and addiction. If you’re seeking treatment, you can call the Substance Abuse and Mental Health Services Administration's (SAMHSA's) National Helpline at 1-800-662-HELP (1-800-662-4357) or go to www.findtreatment.samhsa.gov for information on hotlines, counseling services, or treatment options in your state. What is drug addiction? Drug addiction is a chronic disease characterized by compulsive, or uncontrollable, drug seeking and use despite harmful consequences and changes in the brain, which can be long lasting. These changes in the brain can lead to the harmful behaviors seen in people who use drugs. Drug addiction is also a relapsing disease. The path to drug addiction begins with the voluntary act of taking drugs. Addiction is a disease that affects both the brain and behavior. Can drug addiction be treated? Yes, but it’s not simple. Principles of Effective Treatment Withdrawal.

Happy Birthday, Brain Pickings: 7 Things I Learned in 7 Years of Reading, Wri... by Maria Popova Reflections on how to keep the center solid as you continue to evolve. UPDATE: The fine folks of Holstee have turned these seven learnings into a gorgeous letterpress poster inspired by mid-century children’s book illustration. On October 23, 2006, I sent a short email to a few friends at work — one of the four jobs I held while paying my way through college — with the subject line “brain pickings,” announcing my intention to start a weekly digest featuring five stimulating things to learn about each week, from a breakthrough in neuroscience to a timeless piece of poetry. “It should take no more than 4 minutes (hopefully much less) to read,” I promised. Illustration by Maurice Sendak from 'I'll Be You and You Be Me' by Ruth Krauss, 1954. Illustration from 'Inside the Rainbow: Russian Children's Literature 1920-35.' Allow yourself the uncomfortable luxury of changing your mind. One of Maurice Sendak's vintage posters celebrating the joy of reading. Donating = Loving

Are paedophiles' brains wired differently? There has been immense concern in recent years over the scale of child sexual abuse. But even after years of study and investigation there's still disagreement over what causes paedophiles to be the way they are, writes Richard Sanders. "People, they think 'why should we help the paedophile? We should be prosecuting them, throwing them in jail, having them castrated'. These were the remarkable words of Paul Jones, father of April Jones who was abducted and murdered by a paedophile in October 2012. Now Paul and his wife Coral are campaigning for better understanding of child sex abuse - including offering help to paedophiles to prevent them from offending. Dr James Cantor, of the Centre for Addiction and Mental Health in Toronto, Canada, spends much of his time exploring the brains of paedophiles using MRI scans. "Paedophilia is a sexual orientation," he says. But his theory diverges markedly from the other explanations of why paedophilia exists. Find out more "I do find this really sad.

Four neuromyths that are still prevalent in schools – debunked | Teacher Network It is no surprise that many teachers have an interest in neuroscience and psychology since areas such as memory, motivation, curiosity, intelligence and determination are highly important in education. But neuroscience and psychology are complex, nuanced subjects that come with many caveats. Although progress is being made towards understanding what helps and hinders students, there is still a disconnect between the research in labs and what happens in many schools. Many “neuromyths” are rampant in our classrooms, and research suggests that people are often seduced by neuroscientific explanations, even if these are not accurate or even relevant. Research also shows that explanations accompanied by images of the brain also persuade people to believe in their validity, however random the illustration. Such myths are a drain on time and money, and it is important to explore and expose them. Learning styles Where next for learning styles? You only use 10% of your brain Right brain v left brain

Bertrand Russell on Immortality, Why Religion Exists, and What “The Good Life... by Maria Popova “There are forces making for happiness, and forces making for misery. We do not know which will prevail, but to act wisely we must be aware of both.” Bertrand Russell (May 18, 1872–February 2, 1970) is one of humanity’s most grounding yet elevating thinkers, his writing at once lucid and luminous. There is something almost prophetic in the way he bridges timelessness and timeliness in contemplating ideas urgently relevant to modern life a century earlier — from how boredom makes happiness possible to why science is the key to democracy. Published in 1925, the book is a kind of catalog of hopes — a counterpoint to Russell’s Icarus, a catalog of fears released the previous year — exploring our place in the universe and our “possibilities in the way of achieving the good life.” Russell writes in the preface: In human affairs, we can see that there are forces making for happiness, and forces making for misery. Donating = Loving Brain Pickings has a free weekly newsletter.

Scientific explanation of psychopathy cuts jail time - science-in-society - 16 August 2012 Serial sex offender Raymond Henry Garland, considered one of Australia's most dangerous sexual predators, was officially diagnosed a psychopath last week. Psychiatrist Joan Lawrence told the Brisbane District Court that Garland had an "almost 100 per cent chance of violent reoffending." Garland has been dealt four indefinite sentences – but research out today suggests that biological evidence of psychopathy could alter the length of such sentences. Brain scans and genetic tests are becoming a common feature of courtroom battles, as biological evidence is increasingly used to explain a person's criminal behaviour. For example, last year an Italian woman convicted of murdering her sister had her lifetime sentence reduced to 20 years on the basis of brain and genetic tests, which provided biological explanations for her aggressive behaviour. But does the inclusion of such evidence affect the sentencing of psychopaths – people with a disorder currently thought to be untreatable?