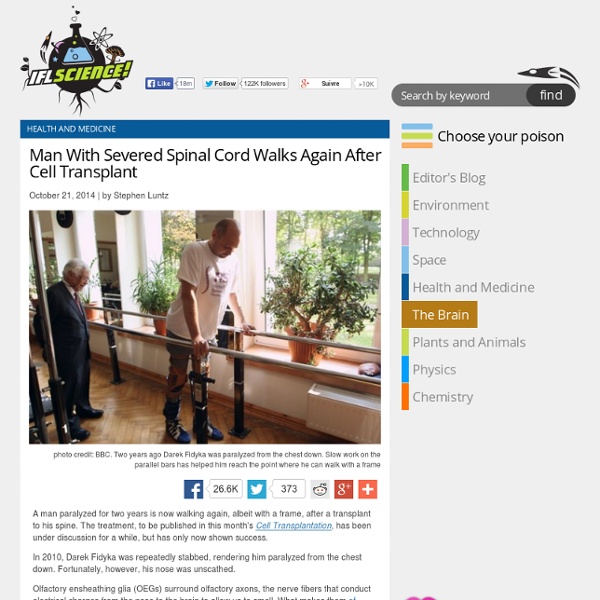 A man paralyzed for two years is now walking again, albeit with a frame, after a transplant to his spine. The treatment, to be published in this month's Cell Transplantation, has been under discussion for a while, but has only now shown success. In 2010, Darek Fidyka was repeatedly stabbed, rendering him paralyzed from the chest down. Fortunately, however, his nose was unscathed. Olfactory ensheathing glia (OEGs) surround olfactory axons, the nerve fibers that conduct electrical charges from the nose to the brain to allow us to smell. What makes them of interest to spinal patients is that OEGs maintain their capacity to promote new neurons into adulthood. While some reptiles can grow new tails, for mammals the capacity for regrowth is lost in most of the nervous system. This capacity for regrowth has inspired spinal researchers frustrated by the fact that the mammalian central nervous system does not regenerate axons. Related:  Emerging Technologies • Cyborg - Human Limbs & Prosthetics

Inject Your Eyeballs With Night Vision Synopsis In "people becoming superhuman" news, a small independent research group has figured out how to give humans night vision, allowing them to see over 50 meters in the dark for a short time. Summary Science for the Masses, a group of biohackers based a couple hours north of Los Angeles in Tehachapi, California,theorized they could enhance healthy eyesight enough that it would induce night vision.

Scientists Grow New Blood Vessels In Just 7 Days Using just a couple spoonfuls of blood, scientists have grown functioning blood vessels in a dish in just seven days. Amazingly, doctors then successfully transplanted the vascular grafts into three children for bypass procedures. Now that the safety and feasibility of this speedy procedure has been established, medics can start using the technique as a novel way to treat patients with vascular diseases across the globe, which affect some 25 million individuals worldwide. The report has been published in EBioMedicine. Three years ago, Professor of Transplantation Biology Suchitra Sumitran-Holgersson and Surgeon Michael Olausson grew a new blood vessel for a patient who was missing a vein that connects the gastrointestinal tract to the liver. While the procedure was a success, it took a month to grow the personalized vessel, and extracting bone marrow is a particularly painful, unpleasant process. [Via University of Gothenburg and EBio Medicine]

'Cyborg' spinal implant could help paralysed walk again The implant, called ‘e-Dura’, is so effective because it mimics the soft tissue around the spine – known as the dura mater – so that the body does not reject its presence. “Our e-Dura implant can remain for a long period of time on the spinal cord or cortex,” said Professor Stéphanie Lacour. “This opens up new therapeutic possibilities for patients suffering from neurological trauma or disorders, particularly individuals who have become paralyzed following spinal cord injury.” Previous experiments had shown that chemicals and electrodes implanted in the spine could take on the role of the brain and stimulate nerves, causing the rats' legs to move involuntarily when they were placed on a treadmill. But this is the first study to show a simple gadget can help rats walk again and be tolerated by the body. The electronic ribbon is placed directly onto the spinal cord However the new gadget is flexible and stretchy enough that it can be placed directly onto the spinal cord.

Cyborgs – scientists create biological tissue with embedded wiring Under its human skin, James Cameron’s Terminator was a fully-armored cyborg built out of a strong, easy-to-spot hyperalloy combat chassis – but judging from recent developments, it looks like Philip K. Dick and his hard-to-recognize replicants actually got it right. In a collaboration between Harvard, MIT and Boston Children's Hospital, researchers have figured out how to grow three-dimensional samples of artificial tissue that are very intimately embedded within nanometer-scale electronics, to such an extent that it is hard to tell where one ends and the other begins. Putting aside futuristic cyberpunk dreams, embedding electronics deep within biological tissue has concrete and immediate uses in the applied sciences of today, because it could lead to a finely tuned, two-way communication link between the biological and the synthetic. So far, our attempts at creating an intimate blend of lab-grown tissues and nanoscale electronics have led to mediocre results at best. Share

Investigating Dimebon, a promising new drug for Alzheimer’s disease Lead Investigator: Professor Vladimir BuchmanInstitution: University of CardiffGrant type: ProjectDuration: 3 yearsAmount: £204,438 Scientific Title: Dimebon, a new drug for treatment of Alzheimer's disease: studies of the mechanisms of disease-modifying action The Society would like to thank the Trustees of The Milly Apthorp Charitable Trust, for their generosity, which has in part made this project possible. What do we already know? Dimebon is one of the most promising new drugs for Alzheimer's disease. Previous research indicates that Dimebon acts to prevent the accumulation of proteins. Could Dimebon be preventing the aggregation of toxic amyloid-beta proteins in people with Alzheimer's Disease, thus slowing progression of the disease? What does this project involve? Dr Buchman is investigating the biological mechanism of Dimebon in nerve cells. How will this benefit people with dementia? Dimebon is a very promising dementia drug and it is crucial its mode of action is understood.

Scientists Regenerate Leg Muscles With Pig Bladder Tissue Muscle can regenerate after an injury, but not if large amounts are destroyed -- such as with military wounds and traumatic accidents. Treatments are limited for these extreme cases of muscle loss, where scar tissue formed to fill in the gap. Stem cells have been shown to work, and these therapies usually follow a similar pattern: take stem cells from the patient, help them develop into the cells of choice, then inject them back. Now, a University of Pittsburgh team led by Stephen Badylak developed a different kind of stem cell treatment that doesn’t involve taking out and adding back stem cells; rather, the stem cells stay in the body. To create thin sheets of biological scaffolding, the team stripped the lining of pig bladders of all their cells -- except for collagen, sugars, and structural proteins. After the method was successful in rodents with injured hind limbs, the team moved on to humans who have lost between 58 and 90 percent of their leg muscle.

‘Ambulance Drone’ Could Drastically Increase Heart Attack Survival Nearly a million Europeans suffer from a cardiac arrest each year, and only 8% will survive. Once the heart stops beating, it takes about 4-6 minutes for the brain to die. Sadly, the average response time for ambulances is about 10 minutes. “It is essential that the right medical care is provided within the first few minutes of a cardiac arrest,” Momont said in a press release. The ambulance drone prototype reaches top speeds of 100 km/h, reaching patients within 12 square kilometers (7.4 square miles) within one minute. Though defibrillators are commonly available in public areas in case of emergency, 4 out of 5 cardiac arrests occur at home where the equipment likely isn’t available. “Currently, only 20% of untrained people are able to successfully apply a defibrillator,” Momont continued. There are some steps that need to be taken before these devices can be used in a real emergency. [All images via TU Delft] Read this next: Urban Algae Farm Gobbles Up Highway Air Pollution