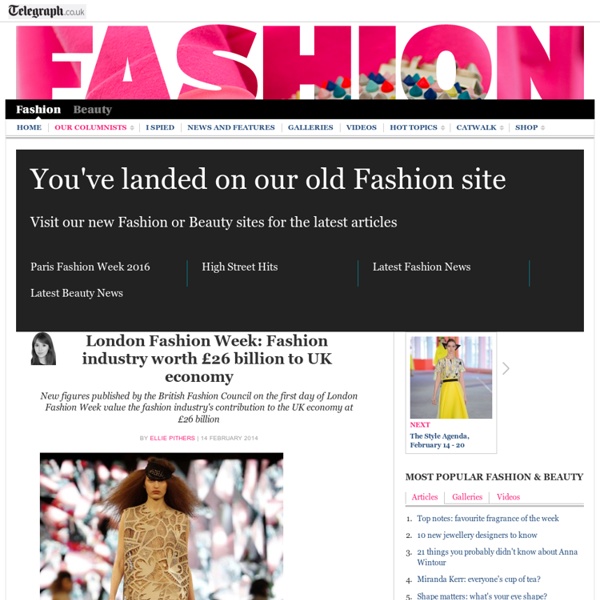 The fashion business Image copyright AFP We know that clothing is big business, but it may be surprising just how big. The fashion industry's contribution to the British economy is an estimated £26bn - that's twice the size of the car industry's and nearly as big as the contribution from housing, according to the British Fashion Council. It is not just dresses and handbags, but also design and manufacturing that make the sector the largest part of the so-called creative industries, which include marketing, etc. It's an important part of the services sector that makes up around four-fifths of the economy. I wrote then that it was a tougher sector to picture than say manufacturing cars which is tangible. But a couple of times a year during London Fashion Week, it is visible as models wear dresses that embody design as they sashay down the catwalk. In the five days of London Fashion Week, about £100m of orders are placed for that season. It's also an industry that has taken to social media to reach that market.

How Zara became the world's biggest fashion retailer This flexibility and efficiency has remained at the heart of Inditex, the company built from Zara that now runs 6,500 shops in 88 different countries and includes seven other brands, including Bershka, Pull & Bear, and Massimo Dutti. The business model built by Ortega is unique. Zara stores around the world receive deliveries twice a week and products designed at the headquarters in Arteixo reach stores three weeks later. This is a staggering pace, helped by the fact that between 51pc and 55pc of clothing is manufactured in what the company describes as “proximity” markets, Spain, Portugal, Turkey and Morocco, instead of Asia. This model is regularly described as “fast fashion”, but Pablo Isla, chief executive and chairman, insists Inditex is “much more” than that. “It is too narrow for everything that is Inditex,” he explains. If there is a secret to Inditex’s success it is the connection between stores, the in-house designers, and its factories. The company is still expanding quickly.

Fashion research and publications High-end & Designer manufacturing report This report, published by the British Fashion Council, contends that supporting high-end manfuacturing is essential to the high end designer fashion sector in the UK. It identifies 137 UK businesses involved in the manufacture of high-end clothing, footwear and accessories with a combined turnover of £1.76bn a year. It includes recommendations to improve education and communication initiatives about manufacturing, and provide targeted support and research on overseas opportunities for manufacturers. Published: March 2015. Download report. British fashion council 2013-14 Annual Review The annual report from the British Fashion Council estimates that the industry contributes £26bn to the UK economy, and outlines the organisation's five strategic pillars. Published: September 2014. Download BFC reports from here. Commercialising Creativity The authors offer multiple recommendations for designers including: Published: May 2014 Download and print report.

Small designers don't need big retailers to find a market In January 2015, San Francisco-based custom clothing company JAKE debuted its capsule, ready-to-wear collection ROYGBIV, not in a boutique or in Bloomingdale’s, but on crowdfunding site Indiegogo. Backers could preorder from 10 essential clothing pieces, and production began after the campaign closed, beginning with the company reaching out to each backer for sizing and color preferences as well as demographic and psychographic data. Although JAKE had already had some success—it was chosen to work with Macy’s Fashion Incubator San Francisco (FiSF)—the crowdfunding campaign helped the small designer to generate demand, avoiding the need for costly guesswork in sourcing the high-end textiles, and also to build relationships and a better understanding of its customers. JAKE’s story is a great example of how new digital platforms are reshaping the retail industry: Suddenly, makers and manufacturers don’t necessarily need bricks and mortar in order to have a market. Why do these models work?

UK online shoppers to spend average of £1,174 each in 2015 Online shopping in the UK is to experience growth this year as consumers are set to spend an average of £1,174 via the web in 2015, which is up 9.6 per cent on 2014. Image via Shutterstock. The study from Vouchercodes.co.uk's parent company RetailMeNot observed international online shopping trends and found that British online retailers will experience a 16.2 per cent year-on-year sales spike in 2015 to hit £52.3bn, compared to £45bn in 2014. Web transactions in the UK are set to account for 15.2 per cent of all retail sales in the UK, according to the report. The average spend per online transaction has fallen year-on-year from £57.08 to £55.76, however, Brits are set to increase the number of sales they make with an average of 21.2 purchases this year, up from 18.8 last year. Giulio Montemagno, SVP of international at RetailMeNot, said: “Investment by retailers in improving the online shopping experience and in more sophisticated consumer targeting is clearly paying dividends.

NEWS: Value of UK Fashion (Updated) The direct value of the UK fashion industry to the UK economy is £26 billion - up from £21 billion in 2009, according to data released by the British Fashion Council to mark London Fashion Week. This figures represents increase of 22% in nominal terms since Oxford Economics measured the industry's contribution in 2009. The UK fashion industry is estimated to support 797,000 jobs (source: Oxford Economics 2014). This is a decrease of 2.3% from 2009 and reflects an increase in productivity by the industry. Fashion’s total contribution to the economy via both indirect support for supply chain industries and induced spending of employee’s wage income is estimated to have risen to over £46 billion. The ‘Value of the UK Fashion Industry’ report, commissioned by the British Fashion Council, defines the industry and analysed the true breadth and economic value of the UK fashion industry for the first time. Source: Facts and Figures AW14 Download and print the Value of Fashion report here

ASOS puts hope in technology to boost international sales Online fashion retailer ASOS is hoping that investment in its IT platform will help to reverse a decline in international retail sales. In its latest trading statement for the three months ended 30 November 2014, the company revealed that its strong UK performance (24 percent growth) had been offset by a two percent decrease in international retail sales. “International trading conditions remain challenging,” said ASOS CEO Nick Robertson. “We have commenced investment into our international pricing and have started to roll out our zonal pricing capability, which combined will help us to address our international performance. During the quarter, Robertson said that ASOS had completed the automation programme at its Barnsley warehouse in time for the Christmas trading period peak. “We had our biggest ever trading week over cyber weekend in November,” he added. Globalisation strategy Role changes Image credit: ASOS

British Fashion Council At a press conference to open London Fashion Week Natalie Massenet, Chairman of the British Fashion Council, announced updated figures showing substantial growth in the UK fashion industry over the past five years. The direct value of the UK fashion industry to the UK economy is £26 billion; up from £21 billion in 2009. Showing an increase of 22% in nominal terms (source: Oxford Economics 2014) The UK fashion industry is estimated to support 797,000 jobs (source: Oxford Economics 2014). This is a decrease of 2.3% from 2009 Whilst employment figures have dropped overall the increased contribution to UK GVA reflects higher productivity within the fashion sector. The British Fashion Council is committed to supporting growth in the sector which it hopes will lead to more employment opportunities Fashion’s total contribution to the economy via both indirect support for supply chain industries and induced spending of employee’s wage income is estimated to have risen to over £46 billion.

UK inflation rate falls back to 0% - BBC News Image copyright Getty Images The UK's inflation rate fell to 0% in August, down from July's rate of 0.1%, the Office for National Statistics (ONS) has said. Inflation, as measured by the Consumer Prices Index, fell due to a smaller rise in clothing prices from a year ago and cheaper fuel prices, the ONS said. CPI inflation has been almost flat for the past seven months. Inflation has failed to take off due to a sharp fall in oil prices and a continuing supermarket price war. Oil prices hit a six-and-a-half year low of around $42.50 per barrel in late August. The ONS figures also showed that the Retail Prices Index (RPI) measure of inflation rose to 1.1% from 1.0% in July. Bank rate The rate of core inflation - which strips out the impact of changes in the price of energy, food, alcohol and tobacco - fell to 1.0% in August from the previous rate of 1.2%. Many analysts expect the Bank of England to start to raise interest rates in the first quarter of 2016. 'Fragile recovery' Pay rise