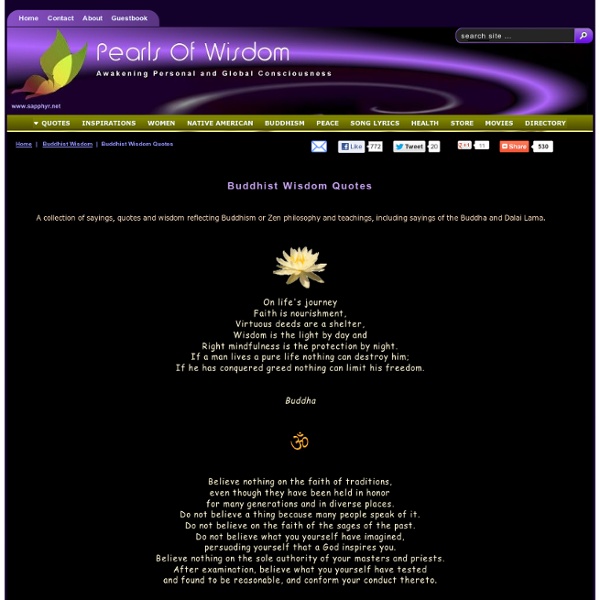 A collection of sayings, quotes and wisdom reflecting Buddhism or Zen philosophy and teachings, including sayings of the Buddha and Dalai Lama. On life's journey Faith is nourishment, Virtuous deeds are a shelter, Wisdom is the light by day and Right mindfulness is the protection by night. If a man lives a pure life nothing can destroy him; If he has conquered greed nothing can limit his freedom. Buddha Believe nothing on the faith of traditions, even though they have been held in honor for many generations and in diverse places. One of his students asked Buddha, "Are you the messiah?" Live in Joy Live in Joy, In love, Even among those who hate. Live in joy, In health, Even among the afflicted. Live in joy, In peace, Even among the troubled. Look within. There is no fire like greed, No crime like hatred, No sorrow like separation, No sickness like hunger of heart, And no joy like the joy of freedom. from the Dhammapada, Words of the Buddha The Dalai Lama Be a lamp unto Yourself Related:  Spiritialite

Quantum Physics Quantum physics is the most counter-intuitive field of physics. By examining the realm of the very small, we find behavior that Einstein described as "spooky action at a distance." Here you will learn what quantum physics has to say about this exotic realm. Julian Voss-Andreae's "Quantum Objects"Physicist/sculptor Julian Voss-Andreae has created a series of "Quantum Objects" - sculptures that attempt to capture the meaning of fundamental quantum physics concept, such as particle spin, wave/particle duality, and uncertainty. Quantum Physics: An OverviewThis overview of the different aspects of quantum physics is intended to provide some perspective to those new to the subject, so that they can further explore the wonders inherent in this miraculous realm. What is Quantum Entanglement? Quantum Physics BooksQuantum physics is one of the most complex concepts in modern physics and a number of books have come out in an effort to explain these quantum concepts to the general public.

Gautama Buddha Hatred does not cease by hatred, but only by love. This is the eternal rule. Gautama Buddha (c. 563 – c. 483 BC) was a teacher and religious leader. See also Dhammapada Quotes[edit] Even death is not to be feared by one who has lived wisely. No one saves us but ourselves, no one can and no one may. To cease from evil, to do good, and to purify the mind yourself, this is the teaching of all the Buddhas. We are what we think. Let my skin and sinews and bones dry up, together with all the flesh and blood of my body! Exertion[edit] Full text online, as translated from the Pali by Thanissaro Bhikkhu Sensual passions are your first enemy. Your second is called Discontent. Your third is Hunger & Thirst. Your fourth is called Craving. Fifth is Sloth & Drowsiness. Sixth is called Terror. Your seventh is Uncertainty. Hypocrisy & Stubbornness, your eighth. Gains, Offerings, Fame, & Status wrongly gained, and whoever would praise self & disparage others. That, Namuci, is your enemy, the Dark One's commando force.

7 ideas for recycling your clutter It’s spring-cleaning time and with that comes your yearly clutter purge. But before you start tossing unneeded items in the trash, consider putting them to better use. From eyewear and electronics to clothes and furniture, the following organizations accept a wide range of basic and unexpected goods that can benefit others in need. Plus you’ll be helping to keep these items out of landfills, and, in many cases, you could get something that’s hard to pass up—a tax deduction. 1. At Nike Reuse-A-Shoe facilities, worn-out sneakers (of any make or brand) are broken down and converted into usable materials for new, top-of-the-line athletic surfaces for communities in need. 2. Through Books for Soldiers, you can send “care packages for the mind” to troops stationed overseas—providing priceless respite from undoubtedly tough surroundings. 3. 4. Your unused or outdated eyeglasses could give someone clearer vision for the first time in his or her life. 5. 6. 7.

Saltwatertattoo Buddhist Quotes Sometimes one creates a dynamic impression by saying something, and sometimes one creates as significant an impression by remaining silent. Through violence, you may 'solve' one problem, but you sow the seeds for another. One has to try to develop one's inner feelings, which can be done simply by training one's mind. This is a priceless human asset and one you don't have to pay income tax on! First one must change. Love and compassion are necessities, not luxuries. I myself feel, and also tell other Buddhists that the question of Nirvana will come later. The universe that we inhabit and our shared perception of it are the results of a common karma. If the love within your mind is lost and you see other beings as enemies, then no matter how much knowledge or education or material comfort you have, only suffering and confusion will ensue. It is under the greatest adversity that there exists the greatest potential for doing good, both for oneself and others. War is out of date, obsolete.

Jeremys How To Tie-Dye Guide -- The Basicsof making your first How to Tie-Dye--The Short Version Revised 06-21-01 Copyright 1998-2001 by Jeremy Wanamaker Please feel free to use share this information, so long as my name remains attached. Thank You! Basic Background I have created hundreds (maybe thousands! heck, I've done 40 in the last two weeks) of high quality, tie-dyed shirts (and other things) in the past sixteen years. Not only do I sincerely enjoy this versatile, main stream art form, but I also love creating clothing at a mere fraction of the cost of the designer labels. How it all Works Tie-dye is an art based on resistance. Materials The first step in making a great tie-dye is understanding the materials. A quick note here: I am in no way associated with Dharma with this one exception: I use their products because they work, the sales staff is friendly and knowledgeable, and they deliver when they say they will -- that is my experience. There are a variety of dye types and brands. Back to top

Fiction - Avenged Sevenfold Wisdom Quotes How to Mix Dye Colors Video I have lost my source of inspiration. I was groping in the dark, trapped in a monochromatic world, wondering what to do. I yearned for fresh colors, not the same old pinks and purples but radicals use, like sunspot yellow. Mix together golden yellow and sunshine orange dyes plus a half cup of salt and four cups of very hot tap water and stir it. Now dip a scrap of spare fabric in the solution to test how the color will look. I love the way this looks. Now put your cotton shirt in warm water and squeeze out the access. Darlings all of the dye mixed together to get any color your heart desires, the possibilities are mind-boggling.

Dalaï Lama Genre : Spiritualité et Religion date de naissance :6 Juillet 1935 L’apaisement réside en chacun de nous Biographie Dalaï Lama Chef politique et spirituel du peuple tibétain, le Dalaï Lama est, selon la religion bouddhique, l’incarnation du Bodhisattva. › Signaler une erreur sur la fiche Zen, Buddhism, and Personality Zen, Buddhism, and Personality Buddhism began in India in 6th century BC. Arose out of a dissatisfaction with the Hindu tradition Based upon the Teachings of Siddhartha Gautama, the Buddha Buddha = One who is awake, one who has achieved full humanness Siddartha was not the first Buddha, nor the last. The Buddha is not a god or divinity, but a man who has developed into a completely mature individual. Every person possesses the 'Buddha-nature' Everyone is capable of developing into a Buddha Siddartha Buddha An Indian prince from Nepal born in 563 BC. Lived a life of luxury for many years. Made journey's away from castle : Saw an Old Man, bent from life's work Saw a man afflicted with serious illness Watched a corpse in a funeral possession Based on his travels, Siddartha realized that sickness, old age, and death are unavoidable. Left his family and wealth to seek the answer through mental and physical discipline, practicing Yoga with several Gurus Siddartha's discovery of Buddhism Zen Buddhism in Japan