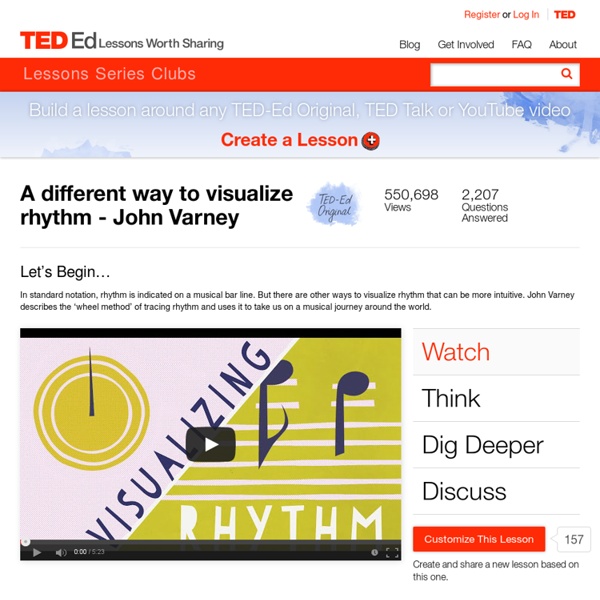 To learn more on circular perceptions of rhythm with specific reference to African music, read this paper and then watch this Five(ish) Minute Drum Lesson on African Drumming. How has drumming played an essential role in African culture? What do specific rhythms represent? Interested in the software applications of a circular rhythmic approach? What are the pros of representing rhythm with a circular representation as opposed to using a more traditional linear representation? This article will help you learn more. What exactly is rhythm? How does the beat of a song differ from its rhythm? As seen from this TED Ed lesson, different cultures share similar rhythms. Rhythm and Math are related? Just love music and want to learn more? How playing an instrument benefits your brain - Anita Collins Why we love repetition in music - Elizabeth Hellmuth Margulis Music as a language -Victor Wooten Related:  mind and music • music theory • Temporaire recup a classer

The Sacred Geometry Of Music The Sacred Geometry Of Music by Andrew Lorimer Music uses the laws of vibration to manifest aurally what exists at the center of everything. Into our reality springs a non-visual harmonic law that is universal. The notes and intervals of music speak directly to the chakra centers and causes them to vibrate in harmony to the vibration of a string or vocal chords, speakers moving through the air, or the sound of someone’s lips making a farting noise through a metal tube. Music uses the laws of physics and mathematics to bring out an emotional response in the listener. The music of the Western world uses a mathematical system based on Twelve. Clock Harmonisphere The mathematics of the harmonisphere are amazing. When we measure the same chords on the harmonisphere, the seven chords have the same mirrored combinations as the piano:

Music theory Music theory considers the practices and possibilities of music. It is generally derived from observation of how musicians and composers actually make music, but includes hypothetical speculation. Most commonly, the term describes the academic study and analysis of fundamental elements of music such as pitch, rhythm, harmony, and form, but also refers to descriptions, concepts, or beliefs related to music. Music theory is a subfield of musicology, which is itself a subfield within the overarching field of the arts and humanities. The development, preservation, and transmission of music theory may be found in oral and practical music-making traditions, musical instruments, and other artifacts. History of music theory[edit] Egyptian musicians playing lutes in an ensemble. The beginnings of music theory can be observed in extremely ancient instruments, artifacts, and later, depictions of performance in artworks. Set of bells from China. 5th Century BCE. Fundamentals of music[edit] Pitch[edit]

The Ultimate List of Online Music Education Games Having a background as a music teacher, I often get the asked what resources are available for homeschoolers to grow in their music studies. As such, today I’d like to share with you an Ultimate List of Online Music Education Games available for FREE to public and homeschoolers alike to have fun while learning more about music. Whether playing via iPad, SmartBoard, or laptop, each resource provides supportive games and activities to reinforce music concepts at home. Aural Training Composers Composition Musical Instruments Notation Funbrain The Piano Player–staff and piano keys recognitionSFS Kids Performalator—play simple melodies via color coded musicMusicards Note Names—treble clef flash cardsMusicards Intervals—treble and bass clef interval flash cardsMusicards Triads—treble clef triad flash cards for chord and inversion recognition Symbols and Vocabulary Variety SFS KidsThe New York Philharmonic Kids Zone Looking for free online education games for another subject area?

Music Harnesses Emotion to Drive Evolutionary Behavior by Lori Chandler The various milestones of my life are best explained by the soundtrack I was rocking to at the time. In fact, my growth as a person can be documented in great detail by exactly what artist resonated with me at which juncture. Science has a number of different takes on what attracts us to certain melodies and chords, and why we need music at all. Neuroscience tells us why music is such an integral part of what makes us human. According to neuroscience, the article says, dancing can blur our sense of separateness. On the other hand, if you want to outsmart evolution's invisible hand, here's how: On a monetary level, that may be why we all swoon at the Sarah McLachlan "Angel" puppy commercials, or donate to charity concerts. We feel close to artists who talk about the world we live in, because through their music and lyrics we connect to the very group/society they are observing; they show us that we are all a part of the same thing. PHOTO CREDIT: iStock

Music Theory for Musicians and Normal People by Toby W. Rush This page includes links to each of the individual Music Theory pages I've created in PDF form. This is a work in progress; I am writing new ones regularly and fixing errors and omissions on existing ones as I find them. Click the thumbnails to view or download each page as a PDF for free! These pages are available for free under a Creative Commons BY-NC-ND license. This collection is a work in progress, but if you would prefer, you can download all the current pages as a single PDF. Each and every one of these pages is available is an 18" x 24" poster. These pages are available in multiple translations and localizations! Interested in helping translate these pages to your own language? What is Music Theory? And why are all these cool and attractive people studying it? Notation: Pitch Or how five little lines came to rule the world. Notation: Rhythm Because nothing says "play that note shorter" like a bunch of weird-looking flags. Notation: Meter Feel the beat! Beaming Triads

Using Music in the ESL Classroom Music is the universal language of mankind.Henry Wadsworth Longfellow When students make a major breakthrough in learning, it is music to a teacher's ears. There is nothing more rewarding for a teacher, than seeing their students smile and laugh while they learn. Benefits of using Music Have you ever heard of anyone who doesn't like music? "Music stabilizes mental, physical and emotional rhythms to attain a state of deep concentration and focus in which large amounts of content information can be processed and learned." Techniques for Using Music with L2 Learners There are a variety of different ways to use music in the classroom. Suggested Activities Many teachers try using music once in the class, but forget to do it again. Teaching Kids with Music Using music with ESL kids has all of the same benefits mentioned above and more. Tips for Using Music Effectively Online Materials and Resources These online music resources offer numerous ideas and tips for using music in the classroom.

Key Chords Key Chords app generates guitar chord progressions automatically. Use it free online, or get the app for Mac, Windows or iOS (iPad) - Click on a chord to preview how it sounds. - Drag and drop to arrange the chord progression - Tweak the settings to control the playback speed Or role the dice and Key Chords will automatically generate a nice sounding progression. Select a Key: Select a key and choose a the major or minor scale. The resulting chord chart will display applicable chords for the selected key. Click a chord: ... and you will hear a cheap computer generated guitar playing the chord. Drag & Drop: - Chords from the chart into the progression timeline. - Rearrange Chords in the progression. - Remove chords from the progression. Roll the Dice: ... and a random chord progression will appear in the timeline. The numbers below each chord in the progression refer to the number of "beats" the chord will linger for. The "Rake Speed" refers to the speed of a single "strum." The main chart areas.

Some Interesting Keyboards Some books about music refer to a persistent "myth" that it is possible, using only two keyboards, to construct an instrument on which it is possible to play music in any key using just intonation. Indeed, it is true that it is not possible, with only 24 keys to the octave, to construct an instrument that will play in perfect just intonation in every key. However, it is possible to exhibit an example of the type of keyboard that has given rise to this "myth", so that its capabilities, as well as its limitations, can be seen. Thus, what may be constructed with 24 keys to the octave is a keyboard which allows playing diatonic music in just intonation in any of the twelve conventionally designated keys, even if nothing can be ensured concerning the pitch of accidentals, and with the provision that one has to make a jump in pitch when one transposes around the far end of the circle of fifths. The most obvious design: This sequence is made up of these 22 ratios: