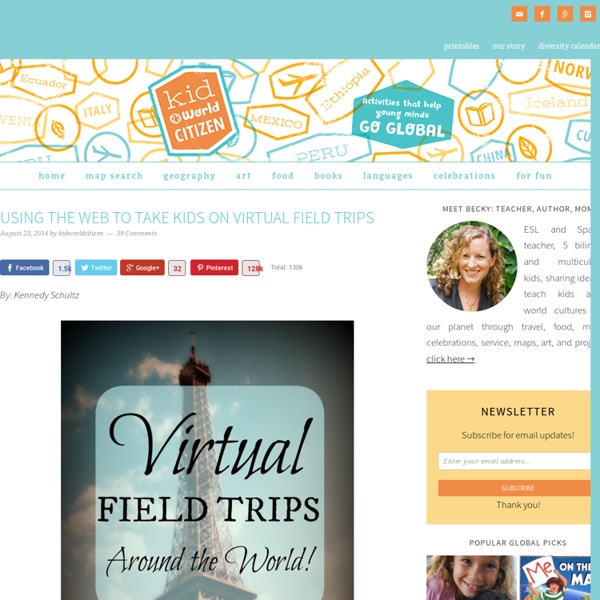 By: Kennedy Schultz Helping kids learn about the world can be an exciting adventure for both adults and kids. When I teach about the chateaux of the Loire Valley in France or ancient Mayan sites in Mexico, I’m always looking for kid-friendly resources that can provide accurate information and engaging authentic pictures that hold the attention of little ones. Virtual Field Trips Since my field trip budget is pretty limited, I especially love websites that offer virtual tours and live webcams to show kids what it REALLY looks like in another world location. Live web cams are another great cultural resource. We have also found web cams of the storks roosting on roof tops in Rust, Austria, and have shared our own local webcams of Niagara Falls with our pen-pal classrooms in other countries to give them an idea of our region. Organizing Teacher Resources With all these cool resources, how do you keep track of them and retrieve them when needed? Related:  varie

Geo-literacy world map activities for kids Get to know the Earth with these geo-literacy world map activities for kids with a global perspective. Geo-literacy world map activities for kids Our favourite new toy is a big world map. We picked it up in a local bookstore (but you can find plenty online) and have been using it ever since to play a variety of ‘get to know the world’ map games. :: learning about different biomes, through researching information books, following a Minecraft Homeschool course, watching videos from around the world (such as from the Grand Canyon Park Rangers talks) :: taking maps with us when we head out on local walks, and being in charge or tracking our route and finding the way: looking for landmarks and locating them on the map and seeing how the cartography displays them. :: using a UK map to look up co-ordinates: sometimes I give her co-ordinates so she can locate the city, sometimes I ask her to find a city and tell me the co-ordinates. Quick fire quiz: who lives where? Quick Quiz Map Game

7 Virtual Field Trips Every Teacher Ought to Know About Due to budget cuts, many teachers lack the essentials like pens and paper. So for most schools, even a small field trip to the local bakery or theater is too much to ask. Well, today I'm going t o show you how to make lemonade out of lemons! Virtual field trips are becoming more and more popular (so popular that you demanded we do a webinar about them). Why? They're free. I promised you lemonade -- so I searched for hours and found THE BEST free online virtual field trips. Have a sip... 1. 2. 3. 4. 5. 6. 7. Do you know of any virtual field trips that aren't on this list? -Mason Share this post with your friends and colleagues:

Appunti, testi, tesine, riassunti online, dispense, guide, lezioni di storia ingegneria Rep Day | CIVIX Rep Day is a nationwide civic education initiative that connects elected representatives with high school students for a dialogue on current political issues. Rep Day aims to break down the stereotypes that young people have of politicians and the political process, and develop a better understanding of and a sense of trust in the people and institutions within our democracy. Introduction: We know that some teachers have been conducting in-school visits with their elected representatives for years. It is our hope that by increasing the frequency, scope and quality of the visits, we will encourage an ongoing dialogue between young people and their elected officials, while improving rates of democratic engagement. CIVIX has prepared several resource materials which are designed to help prepare for and organize your Rep Day event. Each lesson has several options available, for the ease of adapting it to your particular classroom or grade level. As always, we are here to help. Videos

Ten things I wish someone had told me before I moved to Sweden Sweden, much, much colder than you think. Photo: Jonas Ekströmer/TT British writer Clement Boateng loves his new life in Sweden. He just wishes someone had warned him about these ten things first... I am a London-boy born and raised, now currently living and nesting in Stockholm in the hope of a new life, new career, new adventure and new experiences. 1. I previously thought London was cold. 2. It really is tough if you do not speak Swedish. 3. Black seems to be the uniform colour here for everything. 4. There is another unspoken rule that says one must never be within an arm's reach of each other. 5. For a while now, the Swedish have been mislabelled as quite forward, blunt or even harsh with their use of English. 6. Completely off topic but still important nonetheless, is the topic of pizza. 7. Not five minutes late or five minutes early. 8. To all thoses still unfamiliar with this Swedish saying, it basically means not too little and not too much. 9. 10. Clement Boateng.

Continent Boxes ~ Europe I have had “create continent boxes” on my to-do list for over a year! Finally I am getting started! I started with Europe since the Olympics are in London, and since our next Little Passports country is France! I have no real plan with these, just a fun way to expose my kids to cultures, countries, and world geography in general. For now, I have our Europe set up like this {see photo below}. I bought my boxes from Walmart, in 2 different sizes {small 6.7qt, large 12.7qt} knowing I would need bigger ones for continents with more stuff! MANY materials from Montessori Print Shop! For the 3 part cards, I decided to save laminating and cutting time and mounted mine in file folders. I searched online to find a map that was colorful and labeled, to print and laminate for the box, my favorite ended up being this one. There is a blank alphabetical European countries printable, as a little challenge for PacMan and me! Here you can see us exploring together, there’s no real plan. GeoDice