The Definitive Manifesto for Handling Haters: Anne Lamott on Priorities and How We Keep Ourselves Small by People-Pleasing 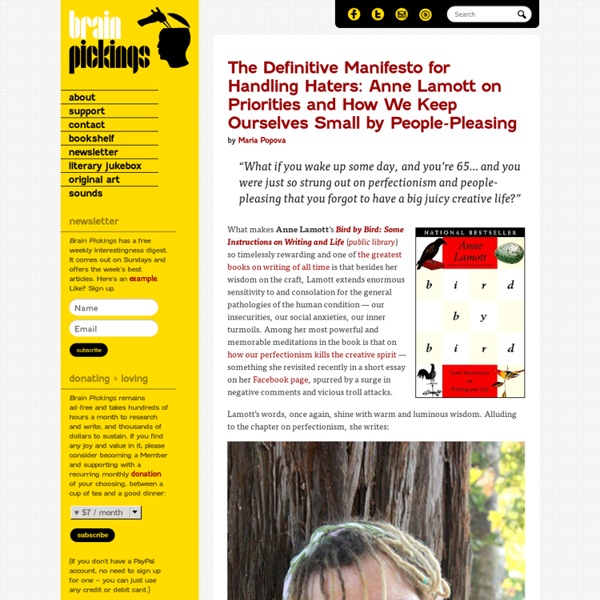 Haters and Critics: How to Deal with People Judging You and Your Work It doesn’t matter how you choose to live your life — whether you build a business or work a corporate job; have children or choose not to have children; travel the world or live in the same town all of your life; go to the gym 5 times a week or sit on the couch every night — whatever you do, someone will judge you for it. For one reason or another, someone will find a reason to project their insecurities, their negativity, and their fears onto you and your life, and you’ll have to deal with it. With that in mind, let’s talk about being judged and criticized. And just for fun, I’ll share some of the most hateful comments I’ve received on my articles. And more importantly, the strategies I use to deal with them. Here’s what I’ve learned about dealing with the people who judge you, your work, and your goals. The Biggest Critic in Your Life It’s easier to complain about the outside critics, but the biggest critic in your life usually lives between your own two ears. The Truth About Criticism

The Benjamin Franklin Effect: The Surprising Psychology of How to Handle Haters “We are what we pretend to be,” Kurt Vonnegut famously wrote, “so we must be careful about what we pretend to be.” But given how much our minds mislead us, what if we don’t realize when we’re pretending — who are we then? That’s precisely what David McRaney explores in You Are Now Less Dumb: How to Conquer Mob Mentality, How to Buy Happiness, and All the Other Ways to Outsmart Yourself (public library) — a “book about self-delusion, but also a celebration of it,” a fascinating and pleasantly uncomfortable-making look at why “self-delusion is as much a part of the human condition as fingers and toes,” and the follow-up to McRaney’s You Are Not So Smart, one of the best psychology books of 2011. McRaney, with his signature fusion of intelligent irreverence and irreverent intelligence, writes in the introduction: The human mind is obviously vaster and more powerful than any other animal mind, and that’s something people throughout all human history couldn’t help but notice.

Why Haters Hate: Kierkegaard Explains the Psychology of Bullying and Online Trolling in 1847 Celebrated as the first true existentialist philosopher, Danish writer and thinker Søren Kierkegaard (May 5, 1813–November 11, 1855) may have only lived a short life, but it was a deep one and its impact radiated widely outward, far across the centuries and disciplines and schools of thought. He was also among the multitude of famous writers who benefited from keeping a diary and nowhere does his paradoxical blend of melancholy and idealism, of despair about the human condition and optimism about the purpose of life, shine more brilliantly than in The Diary of Søren Kierkegaard (public library) — a compendium of Kierkegaard’s frequently intense, always astoundingly thoughtful reflections on everything from happiness and melancholy to writing and literature to self-doubt and public opinion. Kierkegaard writes: There is a form of envy of which I frequently have seen examples, in which an individual tries to obtain something by bullying.

5 Alternatives to Gossip Gossip (n.): Casual or unconstrained conversation or reports about other people, typically involving details that are not confirmed as being true. I would add a few extra elements to this definition: It usually involves a violation of someone else’s boundaries: information told in confidence, information shared against someone else’s wishes, etc.It’s rarely positiveIt usually affords a sense of moral superiority at another person’s expense. I don’t like gossip. I used to gossip. Gossip is the antithesis of empathy and compassion, and it’s a very small step from gossip to shaming. Despite knowing this, gossip is something I’ve found hard to tame in my own life. Here are five practices that I’ve found helpful on my journey towards a gossip-free zone: 1. Journaling is a great way of expressing our frustration or judgements about someone or something without doing any damage. 2. I have a pretty rocky relationship with meditation. 3. 4. 5. Gossip is a barrier to intimacy. Thanks for reading.

Challenging Gossip: Creating a Cohesive Workplace - Gossip is all around us– from magazine covers, tabloids, friendship circles and the workplace. This social engagement is often very hard to avoid, as it has been said: “up to two thirds of a conversation make references to an absent third party” – (Grosser et al., 2012). Gossip is defined as any casual form of communication, or ‘empty talk’ usually about an absent third party, and is usually considered to be negative (Altunas et al. 2014, Grosser et al., 2010). Gossiping in the workplace usually comes about when formal communication between employers, employees is lacking or dysfunctional (Altunas et al., 2014). 7 ways that gossip impacts the social functioning of a group Collecting and disseminating information about individuals. Gossip can have its benefits, creating strong social bonds between individuals and group solidarity (Altunas et al., 2014). However, this is usually at someone else’s expense and the ramifications of gossip within a workplace can be very damaging. Role Allocation