The Literary United States: A Map of the Best Book for Every State 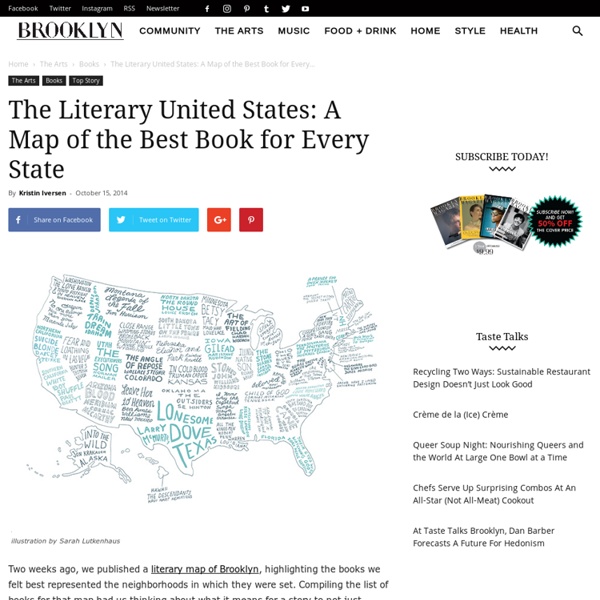 Shakespeare And Company The only guide to Gamergate you will ever need to read Anita Sarkeesian, the feminist writer and media critic who has been attacked in “Gamergate.” (Feminist Frequency/Flickr) Gamergate, the freewheeling catastrophe/social movement/misdirected lynchmob that has, since August, trapped wide swaths of the Internet in its clutches, has still — inexplicably! — not burned itself out. Late last week, when many of us thought we’d seen its end, the mob drove yet another woman from her home: This one, Brianna Wu, because she dared to tweet some jokes about the ongoing drama. Here at the Intersect, we have ignored Gamergate for as long as humanly possible — in large part because it’s been covered in enormous, impressive depth elsewhere, and in smaller part because we’re exhausted by the senseless, never-ending onslaught of Internet misogyny, which really can’t be explained in a blog post — or, frankly, anywhere else. What is Gamergate? Whatever Gamergate may have started as, it is now an Internet culture war. Why should I care about this?

Three Minute Philosophy THREE MINUTE PHILOSOPHY is an animated web series designed to explain philosophical ideas in a way that even your Mum can understand them. Each video will explore the ideas of one or two philosophers and their impact on the tradition of thought in approximately three minutes. We're working chronologically here so if you're still holding out for Nietzsche then it's probably wise to defer your degree and take a holiday in Scotland or somewhere. Heraclitus and Parmenides Two guys who butted heads in really ancient Greece about the nature of time and physical reality. Heraclitus thought that everything was fluid and in constant flux while Parmenides thought the universe was really just a big block of unchanging stuff. Plato Pretty much the most influential philosopher of all time. Empedocles Certifiable nutcase, wannabe cult leader, and unknowingly the precursor to the entire history of science until pretty much this day.

Down The Rabbit Hole Fall deeper down the rabbit hole... City ends reserved soccer at Mission Playground after Dropbox flap The San Francisco Recreation and Park Department has decided to end reserved adult play at Mission Playground — the site of a video-recorded confrontation between tech workers and locals that went viral — after meeting with a group of neighborhood kids on Wednesday, according to department director Phil Ginsburg. Ginsburg said park officials met with a combination of kids and youth soccer advocates and came to the conclusion that, in this instance, the need for unstructured play on weekday evenings outweighed the desire to accommodate adults. “The most compelling suggestions came from the kids who said, ‘This is a safe place we can come and play and we feel like we need more time,’” said Ginsburg. “Our first priority is kids. Youth teams will continue to be able to reserve the field after school until 7 p.m. While Dropbox apologized for the incident, the employees in question had gone through the proper channels to reserve the field.

Eastern Philosophy Explained with Three Animated Videos by Alain de Botton's School of Life “Among the founders of religions,” writes Walpola Rahula in his book What the Buddha Taught, “the Buddha…was the only teacher who did not claim to be other than a human being, pure and simple. […] He attributed all his realization, attainment and achievements to human endeavor and human intelligence.” Rahula’s interpretation of Buddhism is only one of a great many, of course. In some traditions, the Buddha is miraculous and more or less divine. But this quote sums up why the generally non-theistic system of Eastern thought is often called a psychology or philosophy rather than a religion. With the video above, Alain de Botton—whose School of Life has recently brought us a survey of Western philosophers—begins his introduction to Eastern thought with Buddhism. The Buddha’s story, de Botton says, “is a story about confronting suffering.” Most of what de Botton does in his introduction to the Buddha will be familiar to anyone who has taken a comparative religions class. Related Content:

25 books every girl should read before she turns 25 Classic literature is full of famous books about angsty teenage boys learning who they are as men. But what about all the women? The books about women’s coming of age are not nearly as widely celebrated, but are they are JUST as significant and moving and important as all those books about boys. From young adult stories of adventure, to non-fiction graphic novels, these game-changing reads will shape how you think about being a woman — which let’s be real, is mega important. 1. Allende spent seven years researching this novel, which she describes as a young woman’s search for self-knowledge. 2. Persepolis is a graphic novel that I first encountered in an Intro to Gender & Women’s Studies in college. 3. This book is classic for a reason. 4. This 1969 autobiography from Maya Angelou shows how a woman can stand strong despite societal and personal injustices. 5. This classic children’s novel teaches women that they have value beyond what others see in them. 6. 7. 8. 9.