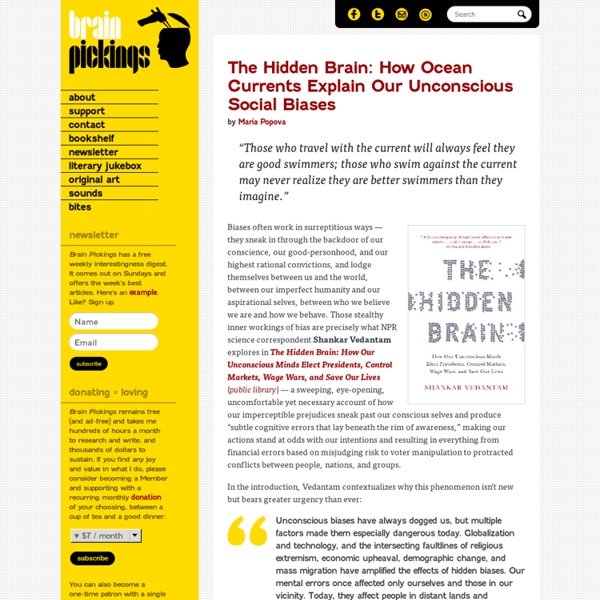 by Maria Popova “Those who travel with the current will always feel they are good swimmers; those who swim against the current may never realize they are better swimmers than they imagine.” Biases often work in surreptitious ways — they sneak in through the backdoor of our conscience, our good-personhood, and our highest rational convictions, and lodge themselves between us and the world, between our imperfect humanity and our aspirational selves, between who we believe we are and how we behave. In the introduction, Vedantam contextualizes why this phenomenon isn’t new but bears greater urgency than ever: Unconscious biases have always dogged us, but multiple factors made them especially dangerous today. Underpinning his exploration isn’t a pointed finger but a compassionate understanding that our flaws make us not bad but human — and give us the opportunity to be better humans. One of the most pernicious and prevalent unconscious biases Vedantam explores has to do with gender.

The West Wing - Josh Lyman and men on Mars Does My Goldfish Know Who I Am? Scientists and Writers Answer Little Kids’ Big Questions about How Life Works by Maria Popova Why we cry, how we know we aren’t dreaming right now, where the universe ends, what books are for, and more answers to deceptively simple yet profound questions. In 2012, I wrote about a lovely book titled Big Questions from Little People & Simple Answers from Great Minds, in which some of today’s greatest scientists, writers, and philosophers answer kids’ most urgent questions, deceptively simple yet profound. It went on to become one of the year’s best books and among readers’ favorites. A few months later, Gemma Elwin Harris, the editor who had envisioned the project, reached out to invite me to participate in the book’s 2013 edition by answering one randomly assigned question from a curious child. The questions range from what the purpose of science is to why onions make us cry to whether spiders can speak to why we blink when we sneeze. It’s normal to cry when you feel upset and until the age of twelve boys cry just as often as girls. We use our brain for memory.

The Barrister Magazine - Unconscious Bias at Play behind Closed Doors By Snéha Khilay, Professional Development Consultant Blue Tulip Training “If you are neutral in situations of injustice, you have chosen the side of the oppressor. If an elephant has its foot on the tail of a mouse, and you say that you are neutral, the mouse will not appreciate your neutrality.” Desmond Tutu Organisations who have taken into account the changes in the Equalities legislation have placed a greater emphasis on policies, procedures and inclusive practices. Some of these organisations have now become complacent with the misguided belief that they do not need to take any further measures regarding diversity and inclusion. According to United Nations, 'Discriminatory behaviour takes many forms but all involve some form of exclusion or rejection'. Biases are found in situations where individuals have the power to influence outcomes through their decision and actions. Tackling assumptions and acknowledging attitudes is a powerful agent for change. About Snéha Khilay

5 Things Magicians Knew Before Scientists Did Magicians are in the business of testing the limits and nature of human perception. It's no surprise, then, that today's cognitive scientists are uncovering features of the mind that magicians have understood (and exploited) for hundreds of years. A close look at some of the many books on conjuring published since the 16th century reveals insights that are only now making their way into the scientific literature. 1. Don’t Look Now, But... Sleight-of-hand artists have long used subtle eye movements to manipulate the attention of their audiences. In recent years, the effect of "gaze perception" on everything from attention to social cognition has become a rich area of psychological research. 2. Yet another topic to catch fire among cognitive scientists in the last two decades is so-called “change blindness,” or, as researchers Daniel Simons and Ronald Rensink have described it, “the striking failure to see large changes that normally would be noticed easily.” 3. 4. 5.

Alan Watts We Are Not Separate The Benjamin Franklin Effect: The Surprising Psychology of How to Handle Haters “We are what we pretend to be,” Kurt Vonnegut famously wrote, “so we must be careful about what we pretend to be.” But given how much our minds mislead us, what if we don’t realize when we’re pretending — who are we then? That’s precisely what David McRaney explores in You Are Now Less Dumb: How to Conquer Mob Mentality, How to Buy Happiness, and All the Other Ways to Outsmart Yourself (public library) — a “book about self-delusion, but also a celebration of it,” a fascinating and pleasantly uncomfortable-making look at why “self-delusion is as much a part of the human condition as fingers and toes,” and the follow-up to McRaney’s You Are Not So Smart, one of the best psychology books of 2011. McRaney, with his signature fusion of intelligent irreverence and irreverent intelligence, writes in the introduction: The human mind is obviously vaster and more powerful than any other animal mind, and that’s something people throughout all human history couldn’t help but notice.

Things You Cannot Unsee (And What That Says About Your Brain) We're going to rewire your brain. Are you ready? I want to show you something simple your mind can do, which illustrates a fascinating emerging theory about how the brain works. The idea of the emblem is obvious: This is an illustration of a trophy with an abstract soccer ball on top. Now consider this tweet from copywriter Holly Brockwell, which got 2,400 thousand retweets: "CANNOT UNSEE: the Brazil 2014 logo has been criticised for 'looking like a facepalm.'" You know, a facepalm: With this new cue—to see the logo as a facepalm—the yellow part becomes an arm with its hand pressed into a green head. People report this kind of thing all the time, and they use this same phrase: cannot unsee. But usually the image hasn't changed; only what we think about it has. I couldn't find anyone who studies the really specific cannot-unsee phenomenon that I'm talking about here. See it yet? It's a dalmatian, camouflaged. Here, I'll outline it (just in case). What do you see? Why is that significant? 1.

Can You Experience Déja Vu of a Place or Situation You've Never Encountered? Can you experience déjà vu of a place or situation you've never encountered? — Ellen Smucker-Green Nashville, Tenn. Alan Brown, professor in the department of psychology at Southern Methodist University, Dallas, responds: Déjà vu is a startling mental event. Although déjà vu often feels supernatural or paranormal, glitches in the brain might be to blame. Other phenomena might also help explain déjà vu, such as inattentiveness. In a recent study, Elizabeth Marsh of Duke University and I investigated this idea. A third possibility is that we have forgotten the prior experience. So, yes, it is possible to experience déjà vu related to a completely new place.

‘Life is not a multiple-choice test’ (www.nagb.org) (Correction: Fixing 33-year teaching degree to 33-year teaching career) I recently posted the resignation letter of Ron Maggiano, an award-winning social studies teacher at West Springfield High School in Fairfax County, after a 33-year teaching career — four years shy of full retirement. In the following post, Maggiano recalls his first day of teaching — and his last, and explains why he is leaving his job. By Ron Maggiano I will never forget that day. Fortunately, my fears were unfounded. Now more than three decades later, I have just spent my last day as a teacher. It was a difficult decision, but I am confident that it was the correct one. Research shows that today’s students need to be prepared to think critically, analyze problems, weigh solutions, and work collaboratively to successfully compete in the modern work environment. And we are not preparing them for success at the college level or in the workplace. It is time to say enough.