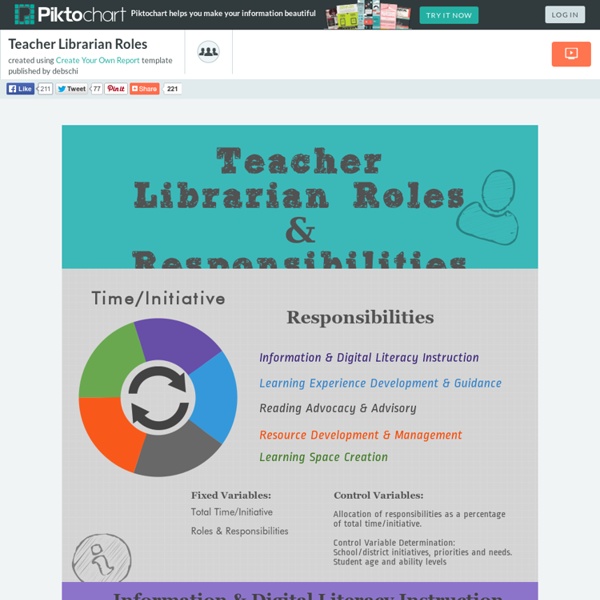 Top 50 School Library Blogs One look at the titles of blogs narrated by school librarians reveals the evolution of a profession within an institution that is at a pivotal point. Charged with the vital duty of promoting digital literacy, today’s librarians are daring, unquiet, sassy and definitely e-literate. This list features the top school library blogs ordered by website popularity metrics and social media engagement including the number of websites that link to a blog and number of followers on Twitter. We commend these school librarians for taking the time to share their ideas, experiences, and advice with the school library community.

An Open Letter To Principals (Before You Hire A New School Librarian) Dear Principal, I know you're busy, so I won't mince words: Hiring and supporting awesome people to work with the students who go to your school is the most important part of your job. Period. It's not school safety. School Culture and the Library In preparation for tomorrow's edweb.net/emergingtech webinar, Pitching the Library: How to Explain What School Librarians Do, I wanted to share a project one of our New Canaan High School seniors created for his documentary filmmaking class last year. His assignment was to make a video that addressed school culture. He emailed me the day before he came down to capture most of the footage. Here is an excerpt of his email: I am currently taking a Documentary Film class and our assignment is to create a film on a school "climate" Our group decided to choose the library media center as a focus for the film because when most if not all students think of the library, ... the library as enjoyable as it is.

Why Do We Need Teacher Librarians? …. Here’s Why: Part 4 of 4 in a series by CUE guest blog editor Jane Lofton As a teacher librarian, I was, of course, attracted by the headline of Mike Niehoff’s article in the Winter 2014 onCUE, “ From Stacks to Macs: The Next Generation Library Space.” Real Makerspaces in School Libraries Are makerspaces flashy trends or core to our mandate? There are a ton of good reasons for makerspaces in school libraries, but first we have to frame the question properly. And that question is, “Why?” Framing an initiative is the best way to stay focused and on track. If we frame it poorly, we get distracted by the shiny, trendy, and new, and we remove our focus from the real issues at hand.

Kurt Vonnegut, Charles Bukowski, Susan Sontag, Harper Lee, and Other Literary Greats on Censorship by Maria Popova A century of conviction celebrating the freedom to read. Some history’s most celebrated works of literature have, at various times and in various societies, been banned — from Arabian Nights to Ulysses to, even, Anaïs Nin’s diaries, to name but a fraction. To mark Banned Books Week 2012, I’ll be featuring excerpts from once-banned books on Literary Jukebox over the coming days. But, today, dive into an omnibus of meditations on and responses to censorship from a selection of literary heroes from the past century. Kurt Vonnegut writes in his almost-memoir, A Man Without a Country (public library):

Life, Liberty and The Pursuit of Libraries So, here's what happened... First, ALA President Barbara Stripling created this document - a Declaration For The Right To Libraries. It's a beautiful affirmation of how libraries transform lives and communities, how they change our collective experiences and grow our shared knowledge. Then, Library Rock Star, (and one of my personal heroes), Doug Johnson, wrote a post outlining his initial thoughts on a Declaration of Students' Rights To School Libraries: a remix of Barbara's work with an emphasis on school libraries. My first thoughts were a) Wow. KLA/KASL Fall Conference 2014: Building Advocacy for your School Library Program As school librarians we wear many hats: book guru, manager, technology leader, instructional partner, research guide, and our very own public relations firm. In advocating for our school library programs, we must identify our stakeholder priorities, develop a mission statement that aligns with our district and school mission, develop programming that will meet the needs of our stakeholders and collect data that doesn't just represent the number of books we check out each month, but really connects to the mission of our district and demonstrates how we support student growth. In this post you will find some resources that James Allen and I shared at the KLA/KASL Fall Conference to help develop that long term, ongoing plan to really advocate for your school library program. The prezi below provides an overview of the topic with research and information from the AASL.

11 Of The Coolest Librarians From Pop Culture, Because Not Every Librarian Is Like the One From Your High School Picture this: a tall, rail-thin woman of an indeterminate age with dark grey hair pulled back in a bun. The horn-rimmed classes perched at the tip of her nose give her a menacing look that just gives you the heebies. She’s always crabby, wears all black, and has one long hair spouting from the mole at the end of her nose. If that clichéd version of a librarian doesn’t sound familiar, you must be one of the lucky ones who knows the cardigan-wearing, tea-drinking, bright-eyed mistresses of the Dewey Decimal system.

My Approach To Digital Content Curation My Approach To Digital Content Curation by Steven Anderson, Presenter at tlipad.com. I spend a great deal of time looking up stuff. Whether that stuff is blog posts to get a pulse on what is happening in the edusphere or researching new tools to share with teachers, I come across a wide variety of resources that I need to save, catalog and be able to come back to later. Fan Fiction Takes Flight Among Teens Illustration by Michael Byers Many years before Harry Potter was born, his parents, Lily and James, met and fell in love at Hogwarts School of Witchcraft and Wizardry. At first, Lily thought James was nothing more than an annoying show-off, but then she got to know the boy behind the bravado. Top Skills for Tomorrow’s Librarians LJ reached out to academic and public library directors and other thought leaders nationwide to find out what new skills they expect to need in librarians in the next 20 years. The 11 listed below emerged as the essentials. Not complete departures, rather they build on trends already in evidence. Advocacy/Politics

School librarians are rising school leaders “School librarians have the unique position, in school, of being school-wide and curriculum-wide—that really makes for a powerful partnership with school administrators,” said Gail Dickinson, AASL’s current president. “I think there are a lot of people who view the digital shift as a threat to librarians, and I really just think it’s a call for reinvention,” said Mark Ray, the 2012 Washington State Teacher of the Year. Schools’ increased reliance on digital resources and content leads to different “thinking about the way libraries function and the ways librarians work with students and teachers.” In fact, as more schools move to using digital tools or digital resources with more regularity, school librarians “have an opportunity to play a bigger leadership role within the school and district. The call for school libraries and librarians to become more integrated within their schools also means that school libraries will change as schools change to align with digital learning practices.

Google boss warns of 'forgotten century' with email and photos at risk Piles of digitised material – from blogs, tweets, pictures and videos, to official documents such as court rulings and emails – may be lost forever because the programs needed to view them will become defunct, Google’s vice-president has warned. Humanity’s first steps into the digital world could be lost to future historians, Vint Cerf told the American Association for the Advancement of Science’s annual meeting in San Jose, California, warning that we faced a “forgotten generation, or even a forgotten century” through what he called “bit rot”, where old computer files become useless junk. Cerf called for the development of “digital vellum” to preserve old software and hardware so that out-of-date files could be recovered no matter how old they are. “We don’t want our digital lives to fade away. If we want to preserve them, we need to make sure that the digital objects we create today can still be rendered far into the future,” he added.