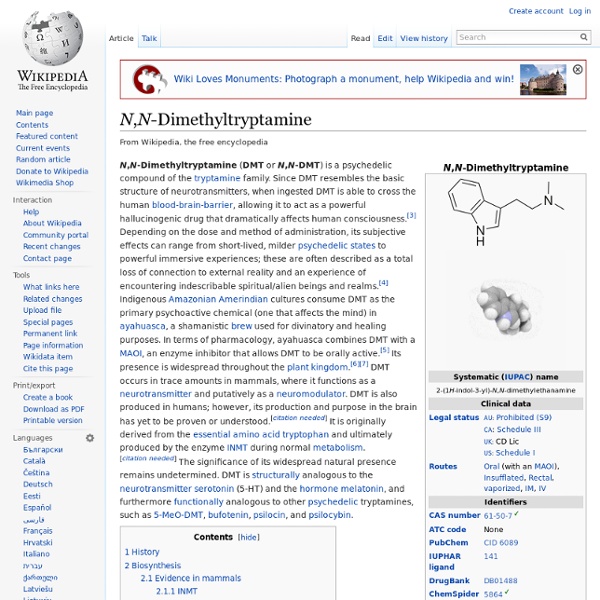 History[edit] Another historical milestone is the discovery of DMT in plants frequently used by Amazonian natives as additive to the vine Banisteriopsis caapi to make ayahuasca decoctions. Biosynthesis[edit] Biosynthetic pathway for N,N-dimethyltryptamine This transmethylation mechanism has been repeatedly and consistently proven by radiolabeling of SAM methyl group with carbon-14 (14C-CH3)SAM).[22][20][24][25][26] Evidence in mammals[edit] In 2013, researchers first reported DMT in the pineal gland microdialysate of rodents.[28] A study published in 2014 reported the biosynthesis of N,N-dimethyltryptamine (DMT) in the human melanoma cell line SK-Mel-147 including details on its metabolism by peroxidases. [29] In a 2014 paper, a group first demonstrated the immunomodulatory potential of DMT and 5-MeO-DMT through the Sigma-1_receptor of human immune cells. INMT[edit] Endogenous DMT[edit] The first claimed detection of mammalian endogenous DMT was published in June 1965: German researchers F.

Related:  Psychoactive Alkaloids • Pineal Gland (Bull.S. New Age Meditation) • Psychopharmacology • 'We're smart. We hurt. We take drugs to numb ourselves to the wo

Bufotenin Bufotenin (5-HO-DMT, N,N-dimethylserotonin), is a tryptamine related to the neurotransmitter serotonin. It is an alkaloid found in the skin of some species of toads; in mushrooms, higher plants, and mammals.[1] The name bufotenin originates from the Bufo genus of toads, which includes several species of psychoactive toads, most notably Incilius alvarius, that secrete bufotoxins from their parotoid glands.[2] Bufotenin is similar in chemical structure to the psychedelics psilocin (4-HO-DMT), 5-MeO-DMT, and DMT, chemicals which also occur in some of the same fungus, plant, and animal species as bufotenin. Entheogen A group of peyotes, in cultivation. Peyote has been used in ritual contexts for thousands of years.[1][2][3] With the advent of organic chemistry, there now exist many synthetic drugs with similar psychoactive properties, many derived from these plants. Many pure active compounds with psychoactive properties have been isolated from these organisms and chemically synthesized, including mescaline, psilocybin, DMT, salvinorin A, ibogaine, ergine, and muscimol, respectively. Semi-synthetic (e.g.

Psilocybin Psilocybin[nb 1] (/ˌsɪləˈsaɪbɪn/ SIL-ə-SY-bin) is a naturally occurring psychedelic compound produced by more than 200 species of mushrooms, collectively known as psilocybin mushrooms. The most potent are members of the genus Psilocybe, such as P. azurescens, P. semilanceata, and P. cyanescens, but psilocybin has also been isolated from about a dozen other genera. As a prodrug, psilocybin is quickly converted by the body to psilocin, which has mind-altering effects similar (in some aspects) to those of LSD, mescaline, and DMT. In general, the effects include euphoria, visual and mental hallucinations, changes in perception, a distorted sense of time, and spiritual experiences, and can include possible adverse reactions such as nausea and panic attacks.

The Heroine of Heroin – Upvoted Tracey Helton (Reddit user traceyh415) is the focus of this week’s episode. We discuss her depression growing up, how she became addicted to heroin, life as a homeless heroin addict, being the subject of the HBO documentary Black Tar Heroin, how she got clean, her involvement in harm reduction, how she got involved in Reddit’s opiates community, Naloxone, and how she saved the lives of over 120 users by sending naloxone to those with no access. Hold On "I lived in an all-female Pentecostal 'discipleship program' in rural Arkansas ... Phalaris arundinacea (Reed Canarygrass) Phalaris arundinacea in garden of Islington college, Nepal. Phalaris arundinacea, sometimes known as reed canarygrass, is a tall, perennial bunchgrass that commonly forms extensive single-species stands along the margins of lakes and streams and in wet open areas, with a wide distribution in Europe, Asia, northern Africa and North America.[1] Other common names for the plant include gardener's-garters in English, alpiste roseau in French, rohrglanzgras in German, kusa-yoshi in Japanese, caniço-malhado in Portuguese, and hierba cinta and pasto cinto in Spanish.[2] Description[edit]

5-MeO-DMT 5-MeO-DMT (5-methoxy-N,N-dimethyltryptamine) is a powerful psychedelic tryptamine. It is found in a wide variety of plant and psychoactive toad species and, like its close relatives DMT and bufotenin (5-HO-DMT), it has been used as an entheogen by South American shamans for thousands of years.[citation needed] Chemistry[edit] Endocrine system In addition to the specialised endocrine organs mentioned above, many other organs that are part of other body systems, such as bone, kidney, liver, heart and gonads, have secondary endocrine functions. For example the kidney secretes endocrine hormones such as erythropoietin and renin. A number of glands that signal each other in sequence are usually referred to as an axis, for example, the hypothalamic-pituitary-adrenal axis. As opposed to endocrine factors that travel considerably longer distances via the circulatory system, other signaling molecules, such as paracrine factors involved in paracrine signalling diffuse over a relatively short distance. The word endocrine derives from the Greek words ἐνδο- endo- "inside, within," and κρίνειν krinein "to separate, distinguish". Endocrine organs and known secreted hormones[edit]

Mescaline Mescaline or 3,4,5-trimethoxyphenethylamine is a naturally occurring psychedelic alkaloid of the phenethylamine class, known for its hallucinogenic effects similar to those of LSD and psilocybin. It shares strong structural similarities with the catecholamine dopamine. It occurs naturally in the peyote cactus (Lophophora williamsii),[1] the San Pedro cactus[2] (Echinopsis pachanoi) and in the Peruvian torch (Echinopsis peruviana), and as well in a number of other members of the Cactaceae plant family. It is also found in small amounts in certain members of the Fabaceae (bean) family, including Acacia berlandieri.[3] Naturally derived mescaline powder extract. History and usage[edit]