The Pop-up Is Here To Stay 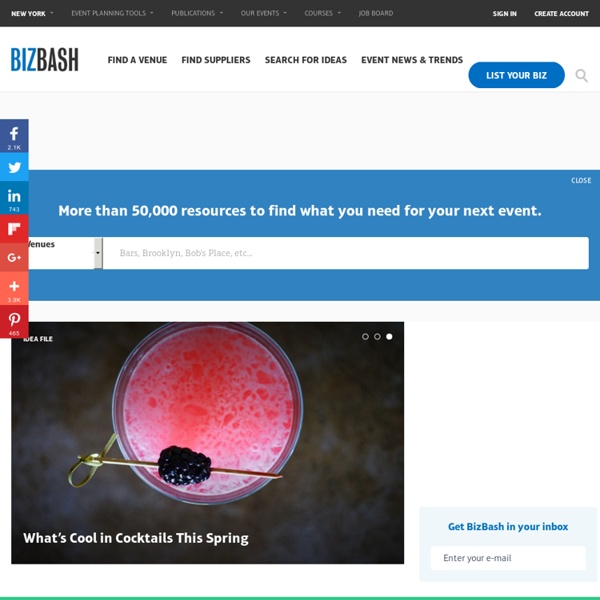 attention metter 5 Ways an Event Can Impress the Most Tech Savvy Guests We’ve all seen them: those people at an event with the newest phone, tablet, or other high-tech gadget. We constantly hear people say, “hey, that’s cool!” or “wow, how does that work?” so how can event organizers impress this savvy crew of event goers? Here are a few tech tips that will impress any guest: 1. Imagine if when your guests approach the door right before an event, their ticket would show up automatically on their phone? 2. Get those savvy guests through the door quicker, and encourage them to save paper by using their phone as a ticket. 3. Create a custom event hashtag that your guests can use to tweet, instagram, or post on Facebook. On that social media note, you can also utilize your hashtag as a marketing tool prior to your event. 4. Instead of creating a paper guide to your event (containing the schedule, map of the venue, etc.), try making it available online for your guests to download on their smartphones. 5. About Uniiverse

Solar Plane Successfully Completes Maiden International Flight The Swiss solar-powered plane, Solar Impulse HB-SIA, completed its first international flight Friday morning, leaving the Payerne military airfield in Switzerland at 8:40 am local time, and landing in Zaventem airport Brussels at 9:30pm Friday evening. The Solar Impulse crossed Switzerland, Luxembourg and France in its 630 kilometer (391.4 mile) journey. The plane completed the journey powered entirely by energy generated from the 11,628 solar cells on its wings and horizontal stabilizer. By charging the solar cells in the day, the Solar Impulse was able to use the charged cells to fly into the night. After landing, CEO, co-founder and flight pilot André Borschberg stated, “It’s unbelievably exciting to land here in Brussels, at the heart of Europe, after flying across France and Luxembourg. Built on a carbon-fiber “honeycomb” skeleton, the Solar Impulse’s upper wings are covered in a solar cell-embedded skin. Photo credit: Matth1 commons/c/cc/Flea_Hop_HB-SIA_-_Solar_Impulse.jpg

untitled Inc. :: Retail Business Weather Intelligence Solutions How do I remove the impact of weather from last year’s sales and create a better "baseline" for planning? What effect will weather have on the shape and strength of my season? Should I accelerate markdowns or will demand in coming weeks allow me clear inventory at higher margins? Retailers know all too well just how much weather affects consumer demand. Month after month, retailers point to the weather as a driving force behind both positive and negative variations in store traffic and sales. Weather causes people to change their plans with certain conditions making them much more likely to seek out or avoid certain activities, products, and services. For retailers, ignoring or ineffectively managing weather risk can result in bloated inventories and steep markdowns or stock outs and lost sales. Planalytics Business Weather Intelligence offers solutions for retailers in the following areas: Planning, Buying and Distribution Marketing, Inventory Control and Merchandise Management

7 Key LinkedIn Stats: When to Post, What to Post & How to Improve A quick glance at a chart of the Internet’s fastest-growing social networks reveals what you likely already knew (Instagram is growing like mad) and what might be a surprise: LinkedIn is the third-fastest-growing social network. We at the Buffer blog can vouch for LinkedIn’s growth as our blog has experienced a swell in LinkedIn referral traffic over the past year, up 4,000 percent from last year at this time. Part of that has to do with our emphasis on updates and sharing at LinkedIn, another part has to do with the popularity of LinkedIn contributing a larger audience and more eyes to our content. So the question becomes: How best to take advantage of this expanding interest in LinkedIn? 1. Twitter and Facebook may reign when it comes to social sharing of stories, blog posts, and visual media, but when it comes to direct traffic to your main site, LinkedIn is far and away the No. 1 social referral source. LinkedIn: 64% of social referrals to corporate homepageFacebook: 17%Twitter: 14%

Ex-FBI cyberexpert: Potential for digital Pearl Harbor is real | Security & Privacy After 24 years with the FBI, Shawn Henry retired late last month from his post as executive assistant director of the Criminal, Cyber, Response, and Service Branch of the agency. Today, he announced that he will be working for security startup CrowdStrike. In a phone interview with CNET today, Henry discusses what he thinks are the biggest cybersecurity threats facing the country and why the bad guys always seem to be one step ahead. So, what will be your role at CrowdStrike? And why go to CrowdStrike? We've been hearing references to a "digital Pearl Harbor" for ages. CrowdStrike is going to be serving primarily corporate customers, but government customers as well? How would you explain "digital Pearl Harbor" exactly and what does it entail? I haven't used that term in the last five years. Are we going to see it? How serious is the Internet-borne threat to critical infrastructure? For consumers what is the biggest cybersecurity threat? What have we not covered that we should?

Top 5 Snapchat Campaigns by Innovative Brands - Keyhole Blog Gone are the days when Snapchats were only flirty, semi-nude pics. Snapchat, the black sheep of the social media family, is now being picked up and experimented by brands all over the world. Snapchat has over 100 million daily users that send 400 million snaps every day – it’s not a surprise that companies are desperate to tap into Snapchat’s user-base. According to Sumpto’s study, 77% of college students use Snapchat daily! Here is a compilation of the best Snapchat campaigns by top brands. 1. World Wildlife Fund Snapchat campaign stirred the flames of animal lovers everywhere. According to Tuba Ugur, Communications Officer for WWF, “The urgency to act and Snapchat’s dynamic were the perfect match to disseminate our message for species. Results: In three days, they reached their donation target for the entire month. 2. Calvin Klein wanted to increase engagement on two emerging social media channels: Snapchat and Tumblr. 3. You snap? 4. 5.

The Van Indicator Signals Recovery on Main Street (Corrects dates in X-axis of chart) How can we tell how small businesses are feeling? Find out how many vans they’re buying. Van sales were up 32 percent in July over last year, a greater increase than nearly every other vehicle type (exception: sports cars), according to data from Bloomberg Industries. “Van sales offer an insight into corporate economic sentiment, given their high penetration into small businesses and commercial fleets,” writes analyst Kevin Tynan. He estimates that well over 90 percent of vans are purchased by businesses. From housing contractors to beer distributors, much of America’s small business commerce travels by van. The trend in van sales broadly tracks small business optimism as measured by the National Federation of Independent Business: Some of this is likely pent-up demand. The van indicator is consistent with other measures of business sentiment, says Chad Moutray, chief economist at the National Association of Manufacturers.

Your phone will soon be your new doctor Imagine a day when your phone has all of your health information. It knows your goals, your time horizons and what activities you need to focus on to achieve those goals. It knows your schedule, whether you like to do things alone or in groups and who you like to train with. It knows what you eat, how much you’ve slept and all of your vital signs in real-time. Based on the information it collects, your phone will lay out a plan to help you live a healthier life. Many people are up in arms about how much your phone already knows about you. Lots of apps have emerged in the last few years to track all of this health information. Making sense of large data sets has been done in other categories many times before. By using your phone as a health monitor, different incentives can be implemented to increase your accountability even further. Over time, people will come to rely more on their phone to keep them healthy than they do on their actual doctor. Image courtesy of Flickr user El Payo.

Scenarios for the world in 2040 For those of you that have missed out on the free e and p copies of Future Vision here is the first bit of some more free bits. About this book People have always been curious about what lies over the horizon or around the next corner. Books that speculate about the shape of things to come, especially those making precise or easily understandable predictions, have been especially popular over the years. The world offers more promise than ever before, but there are also more threats to our continued existence. In short, the future is not what it used to be and needs rescuing. Thus the interest in books that explain what is going on right now, where things are likely to go next and what we should do about it. There are, of course, different ways in which the future might unfold and suggesting, as many futurists and technologists do, that one particular future is inevitable is not only inaccurate, but is dangerously misleading. The preoccupation with trends analysis is doubly misleading.

The Future of Our City: The Vision Future of Toronto’s financial district by Onespace Unlimited Inc. Courtesy of Ontario Association of Architects. Charting a course to 2050 is going to be a daunting task for any city. This week: We look at the vision of a futuristic Toronto, how our built landscape and infrastructure will evolve and why we are talking about the future of this city right now. By the year 2050 Toronto living will be small. The City of Toronto predicts we’ll hit the three million people by 2020 and the GTA would be looking at six million. Toronto is knee-deep in “super projects” and hell-bent on adding density. Reclaiming unused space by RAW Design Inc. City of Toronto chief planner, Jennifer Keesmaat said Toronto has reached a fork in the road and is facing a critical period ahead in urban planning. During Nuit Blanche, Keesmaat was walking along a car-less King Street. “We can’t have crappy sidewalks. Space is at play here.