Medical robotics: Would you trust a robot with a scalpel? 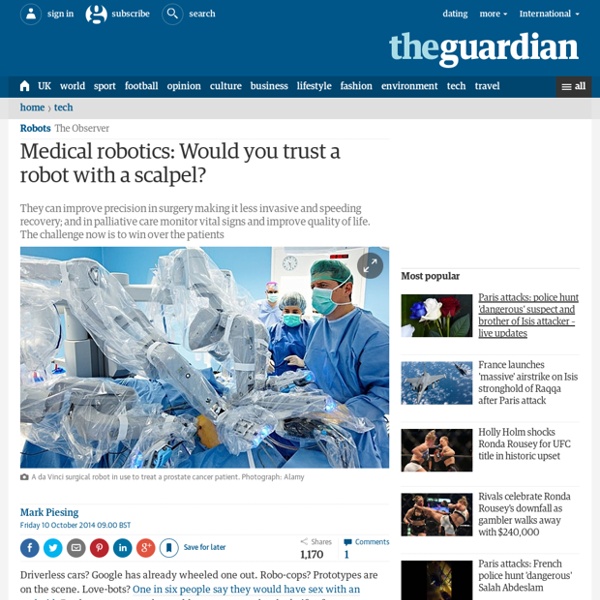 Driverless cars? Google has already wheeled one out. Robo-cops? Prototypes are on the scene. Love-bots? It might seem like a solution dreamed up by Aldous Huxley, but it’s already a reality. It might conjure up an image of Star Wars’ C-3PO in scrubs, but many of these medical machines are actually closer to the robots used to build your car. Not that a lack of automation is anything to be sniffy about; these machines still use powerful computers to carry out difficult jobs. Where the researchers are taking their cue from the seriously sexy technology of driverless cars is, for example, in the development of domestic robots for palliative care, be it helping you make a cup of tea or alerting the doctor if you skip your medication. For surgeons, who are often backing the development of these robots, the benefits of a machine like the da Vinci system are manifold. But it isn’t just about high precision. It isn’t just keyhole surgery that can benefit from cutting-edge tech. Related:  FUTURE OF TECH • What's changing

robots2 Robot farmers are the future of agriculture, says government | Environment Will robot feet in near-future time walk upon England's mountains green? And will there be drones flying overhead from England's pleasant pastures seen? A new vision of robots patrolling the meadows and cornfields of the UK may seem dark and satanic to some, but according to farmers and the government it is the future, and will bring efficiencies and benefits, and an end to some of the most back-breaking jobs around the farm. An increasing number of "farmbots" are being developed that are capable of finicky and complex tasks that have not been possible with the large-scale agricultural machinery of the past. For instance, a "lettuce bot" is capable of hoeing away ground weeds from around the base of plants. A "wine bot" trundles through vineyards pruning vines. The government has set out for the first time an "agri-tech" strategy, with £160m in public funding. It is not just on the ground that technology promises to transform farming. Some may never catch on.

Hansen Medical Announces Completion of First Robot-Assisted Uterine Fibroid Embolization Procedure in United States MOUNTAIN VIEW, CA, Oct 21, 2014 (Marketwired via COMTEX) -- Hansen Medical, Inc. HNSN, +7.60% a global leader in intravascular robotics, today announced the completion of the first robot-assisted Uterine Fibroid Embolization (UFE) in the United States. Sandeep Rao, MD, Interventional Radiologist, performed the procedure at Sierra Medical Center in El Paso, Texas using the Magellan Robotic System. "I am extremely pleased by the outcome of this initial procedure," said Dr. Uterine fibroids are non-cancerous tumors in or around the uterus, and are the most common benign tumors in women. Uterine Fibroid Embolization is a proven, non-surgical procedure in which a catheter is used to deliver tiny particles to block the blood vessels supplying blood to the fibroids. The Magellan Robotic System offers physicians robotic catheter control and stability during complex procedures in the peripheral blood vessels, and is used by physicians worldwide in a wide variety of catheter-based procedures.

New Robotic Exoskeleton Is Controlled by Human Thoughts One big, robotic foot and then the other; that's how a man wearing a clunky-looking exoskeleton makes his way across the room. The machine's motors are noisy and its movements are painfully slow, but these details seem to fade into the background when you realize how the man is controlling the cumbersome contraption: He's doing it with his mind. The exoskeleton — a robotic device that fits around the man's hips and legs — is part of a new technology being developed by researchers in Germany and Korea. The other part is a dark cap on the man's head, covered with electrodes that facilitate the connection between his brain and the machine. Lots of researchers are working to develop technologies that help people regain control over their movements through a combination of robotics and brainpower (formally known as brain-computer interface control systems). A small controller jutting out from the exoskeleton holds a set of light-emitting diodes (LEDs) that light up in different patterns.

robots1 Amazon banks on rise of the robots to speed online orders to customers | Technology While the Amazon founder Jeff Bezos dreams of drones carrying out deliveries, the online giant has revealed that a horde of robots is already in action in 10 of its US warehouses. Orange, oblong and squat, the wheeled robots roll beneath shelves of goods, which they then lift and ferry around the warehouse, navigating by barcodes on the floor. Amazon is employing more than 15,000 of the robots, each of which weighs 320lbs and is able to carry as much as 750lbs, at 10 of its 109 global “fulfillment centers”. The robots could be harbingers of a new era, vastly simplifying the jobs of Amazon’s human workers and coming in particularly handy during the hectic holiday shopping season. In unequipped warehouses, employees must trek through miles of stacks to shelve and pick goods. Amazon’s senior vice president for operations, Dave Clark, told reporters the robots cut one warehouse’s operating costs by 20%. Robots could ease such pressures – or they could displace some jobs entirely.