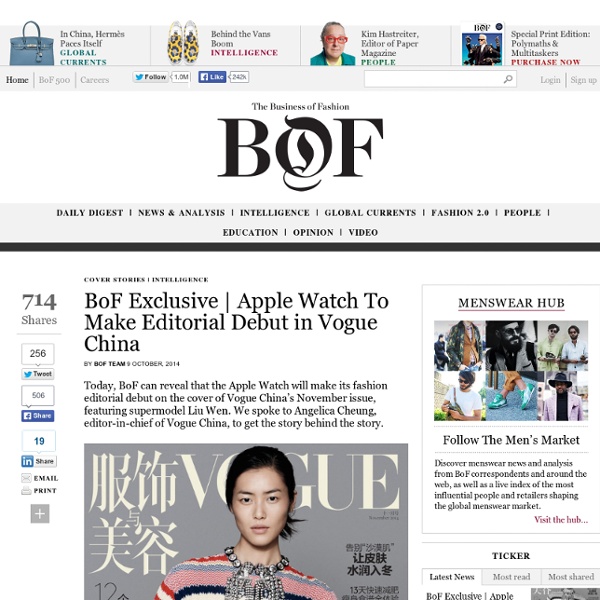 BEIJING, China — Apple’s relationship with fashion has grown from a casual flirtation to a full-blown love affair. BoF can reveal that the Apple Watch is set to make its editorial debut on the cover of Vogue China’s November issue, out this Monday, featuring Liu Wen. A spread from Vogue China’s November issue | Source: Vogue China It’s the latest in a series of activities that puts fashion at the focus of Apple’s communication strategy. On September 9th, in the middle of New York Fashion Week, the Silicon Valley-based company invited a cadre of fashion editors and bloggers to the unveiling of the Apple Watch, held at its the headquarters in Cupertino, California. Later that evening, Apple organised a high-profile dinner for 250 fashion insiders, co-hosted by Azzedine Alaïa, Marc Newson and Jonathan Ive. Apple Watch by David Sims and Karl Templer | Source: Courtesy Apple But why might Apple choose a Chinese fashion magazine for its editorial debut? Related:  Luxury • Luxury Brands

Louboutinize This: We Try The New Christian Louboutin Photo Filter App Do you hear that? That's the sound of Christian Louboutin's entire marketing team quietly weeping at the brand's ill-advised attempt to join the ranks of iPhone photo editing software. On paper it sounds great: A new free app from the developer of shoes that cost more than our rent, to make users seem cooler to people they don't even know. Why wouldn't that appeal to the social media generation? Well, here's why not: Firstly, because the market is already highly saturated with the VSCO Cams and Facetunes of the world. Here's what happened when HuffPost UK Style tried to "Louboutinize" our lives... First up was Rouge. I painted my desk red and it felt like I was in hell. Next, Crystallize. Crystallize a memory. Finally, Legs. We reckon Louboutin should just stick to the shoes (and the lipsticks, dear god the amazing lipsticks). SEE ALSO:Can 'Squinching' Make You Look Better In Photos? Close

Behind Zegna’s Big Bet on Film - The Business of Fashion SHANGHAI, China — The closing event of Shanghai Fashion Week last Wednesday was not your typical runway spectacular. Instead, Italian menswear giant Ermenegildo Zegna took over the city’s Exhibition Centre to premiere a big-budget cinematic thriller, A Rose Reborn, directed by internationally acclaimed South Korean director Park Chan-wook. It’s not the first time that Zegna’s creative director, Stefano Pilati, has used film to tell his story of the brand. Amidst slumping sales growth in China, the film was explicitly created to reaffirm Zegna’s position in the market, where the brand opened its first store in 1991, long before other luxury brands. Pilati assembled an impressive team to bring the concept to life. “What I knew is that I wanted to work with an Asian director and a Chinese actor. The film follows an aspiring and passionate engineer (Huston) as he attempts to broker a business deal with an enigmatic Chinese tycoon, Mr Lu (played by Wu).

Louis Vuitton Ranked World's Most Valuable Luxury Brand In the luxury world, the top dogs are exactly who you might expect them to be. According to a new ranking from the research group Millward Brown and the advertising conglomerate WPP, Louis Vuitton — the crown jewel in the luxury conglomerate LVMH's portfolio — is worth an estimate $24.7 billion, making it the most valuable brand in the sector. To calculate a brand's value, the study looks at corporate earnings, its potential for future earnings and qualitative factors like meaningfulness, distinctiveness and salience that speak to consumers' attitude toward purchasing its products. For brands like Vuitton that are part of a larger company, figuring out that financial value is a matter of figuring out its percentage contribution to overall sales. Trailing behind Vuitton, there's Hermès ($19 billion), Gucci ($13 billion), Chanel ($9 billion), Rolex ($8.5 billion), Cartier ($7.6 billion), Prada ($6.5 billion), Burberry ($5.7 billion), Michael Kors ($3.8 billion) and Tiffany ($3.2 billion).

Sustainable Spray-On Clothing Technology Turns Into Fabric Instantly Advertisement Over the past few years, spray-on body paint that looks like clothing has gotten popular. It’s even starting to show up in television ads and other marketing endeavors. This technology, called Fabrican, is based on 15 years of research by fashion designer Manel Torres and particle engineer Paul Luckham. When I think about using spray-on clothing in daily life, the roadblock that I hit in my mind is that we wouldn’t be able to spray our own clothing on our bodies. I wonder if in a few decades from now we’ll all either 3D print our clothes or make them in some other unusual way like this. Spray-On Clothing Technology Creates Non-Woven Fabric (Click Images To Enlarge) (Video Is Slightly NSFW) Via: [Design Rulz] [Designboom]

Is Givenchy Really a Couture House? — The Fashion Law In light of the Fall/Winter 2014 couture shows, Alexander Fury, fashion editor of The Independent posed a question that piqued my interest: When does your status as a "couture" house expire? While Fury questioned this on the heels of the Givenchy Spring/Summer 2015 menswear show (he clarified that is was not a "a pointed menswear comment, just prompted by their Instagram" in reference to the brand's tag line, which reads "GIVENCHY OFFICIAL INSTAGRAM OF THE COUTURE HOUSE"), his question raises some interesting points beyond Givenchy. In an article that Fury subsequently penned, he noted the mystery that surrounds couture. Couture (aka haute couture) is governed by Fédération française de la couture, du prêt-à-porter des couturiers et des créateurs de mode (hereinafter "Fédération française de la couture"), a more modern version of the Chambre syndicale de la haute couture parisienne, the body that historically governed couture creation in France beginning in 1868.

The Instagram accounts changing the world No one can really dispute the power of social media. Whether it's raising awareness for once-ignored issues, or helping to bring down entire governments, sites like Facebook, Twitter and Instagram are now stronger than ever. Offering people the chance to take pressing political problems into their own hands, it's become a whole new way of addressing everyday social injustice. “Instagram has a way of uniting complete strangers in a way that Facebook, for example, does not,” explains Amber Amour, founder of #StopRapeEducate. “It's a useful tool because it allows one to reach a large audience, and to be heard.” But how effective can one image really be? With their slogan emblazoned across the chests of basically everyone – from Cara Delevingne to Miley Cyrus – the notorious Free The Nipple movement has had no shortage of publicity recently. Poet Alyssa Seibert has swapped images for words with her Instagram account.

Top 10 Fashion Films of the Season - The Business of Fashion LONDON, United Kingdom — As online video consumption continues to grow, short fashion films have become an increasingly important component of brand advertising campaigns, though, on the whole, the genre still suffers from a host of challenges relating to lack of budget, poor distribution strategies and the political power wielded by photographers and their agents. In past seasons, big-budget cinematic-style epics, snappy dance-driven shorts and films propelled by humour have typically attracted the largest audiences. This time around was not much different. Zegna’s ambitous “A Rose Reborn” directed by Park Chan-wook made our list, as did Alexander Wang’s funny Autumn/Winter campaign film, featuring Chris Kattan as Mango, a character from the American comedy show Saturday Night Live. This season, we also created a fashion film of our own! Now, without further ado, sit back, relax and enjoy BoF’s Top 10 Fashion Films of the Season. 1. 2. 3. 4. 5. 6. 7. 8. 9. 10. Konnichiwa!

Queen 'helps sell UK luxury brands' The Queen plays a key part in selling Britain's luxury brands abroad, according to Warwick Business School. With the luxury market worth around £167 billion last year, many brands have found a perceived association with royalty provides a key advantage over rivals. "Luxury goods are defined as those satisfying hedonic rather than functional needs and our research has found this is an area that Britain enjoys a distinct advantage in," said Professor Qing Wang. "The Queen is a significant reason for this, as a very important factor that makes Britain stand out is that it incorporates tradition and innovation seamlessly. "Put differently, Britain's advantage lies in the so-called soft power, which is defined as the ability to get what you want through attraction rather than through coercion, and the UK's royal heritage is a key part of that." The research focused on the China, one of the biggest markets for luxury goods.

Knit a Working Circuit Forget about circuit boards and start thinking about circuit stitches with this illuminating tutorial by electronic art professor Jesse Seay on how to knit your own circuitry. …I developed a method to “print” circuit boards on my knitting machine, with materials that are inexpensive, easily available, and solderable. The method works with both traditional electronic components and with e-textile components. And while I use a knitting machine for rapid production, the materials should work fine for hand knitters. As Seay explains in the introduction, this tutorial assumes that you already know how to knit and shows you how to integrate wiring into your knitting by design a knitting pattern that will allow you to make connections between electronic components, just like an ordinary circuit board. Once you get the hang of it, it’s fun to turn “traditional” circuit designs into knitted circuit designs.[...] Related

How Premium Fashion Brands Are Maximizing Their Social Media ROI Social media and digital technology have forever changed the retail industry. In 2011, brands and retailers have reached a tipping point, digital innovations have decentralized commerce, and real-time consumer demand for designer merchandise has forever changed retail production cycles. Many fashion brands, mocked for their inability to move with the web because of a fear of accessibility, are no longer fighting the flow. Through their embrace of social media and social commerce, fashion brands are now innovating and profiting from their online marketing strategies. Luxury and premium brands are starting to lead the way for all retailers looking to connect with their customers and build online revenue channels. Fashion Brands and Social Commerce Online shopping is becoming a socially connected event. During the past year, the luxury market experienced a digital tipping point, with many brands rolling out new e-commerce sites, social media campaigns and mobile applications.

Google reveals Android Wear, an operating system for smartwatches Google is officially getting into wearables. The company has announced Android Wear, a version of the operating system designed specifically for wearable devices. To start with, the system is made for smartwatches, and Google is moving aggressively to make itself the key name in wearables. The company has released two videos that show off what the watch interface will look like, and from what we've seen, it's very impressive. In addition, Motorola and LG have already revealed their first Android Wear smartwatches, which look more attractive than any smartwatches we've seen to date. There are several key features that have been announced. The company will also be using Google Now in the watches. You'll also be able to say "OK Google" to perform voice searches, à la Google Now. Google is working to make sure these watches aren't hideous: Fossil and other "fashion brands" will apparently offer watches using the operating system later this year.