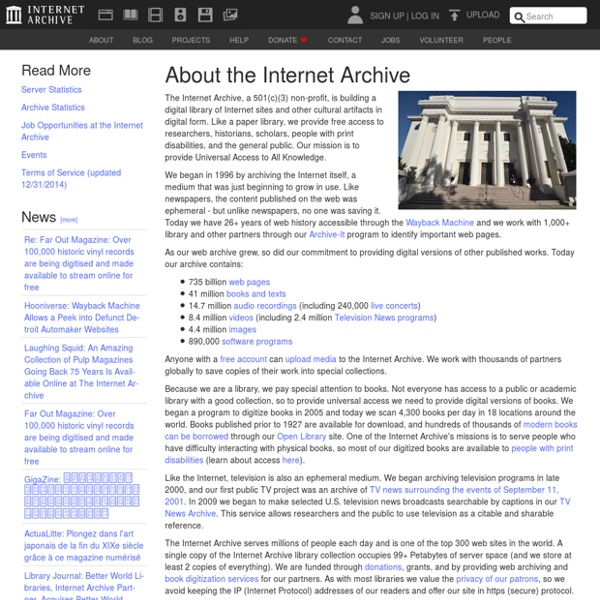 The Internet Archive, a 501(c)(3) non-profit, is building a digital library of Internet sites and other cultural artifacts in digital form. Like a paper library, we provide free access to researchers, historians, scholars, the print disabled, and the general public. Our mission is to provide Universal Access to All Knowledge. We began in 1996 by archiving the Internet itself, a medium that was just beginning to grow in use. Like newspapers, the content published on the web was ephemeral - but unlike newspapers, no one was saving it. Today we have 25+ years of web history accessible through the Wayback Machine and we work with 750+ library and other partners through our Archive-It program to identify important web pages. As our web archive grew, so did our commitment to providing digital versions of other published works. Anyone with a free account can upload media to the Internet Archive. Because we are a library, we pay special attention to books.

Ossian Sweet defied segregation. Now his Detroit home will be a museum. The all-white jury couldn’t reach a verdict, and Frank Murphy, a future U.S. Supreme Court justice, declared a mistrial. After Henry Sweet was acquitted by another all-white jury, the charges against the rest were dismissed. ‘Transference of authority’ Baxter’s parents, William and Ruby, bought the house in 1958 for $15,000 after his mother recalled seeing it in a dream. New research shows how brain-computer interaction is changing cinema Over the past few years, we have seen the extraordinary development of neural prosthetic technologies that can replace or enhance functions of our central nervous system. For example, devices like Brain-Computer Interfaces (BCIs) allow the direct communication of the brain with a computer. The most common technique applied in these devices, is Electroencephalography (EEG) – a recording of the electrical activity along the scalp. These technologies are mainly used in health, but our new research shows how they are changing the future of cinema too.

Téléchargez des e-books gratuits Ebooks gratuits (2956 résultats) Page : 12345... Suivant 16 skills students need to learn today to thrive tomorrow The gap between the skills people learn and the skills people need is becoming more obvious, as traditional learning falls short of equipping students with the knowledge they need to thrive, according to the World Economic Forum report New Vision for Education: Fostering Social and Emotional Learning Through Technology. Today's job candidates must be able to collaborate, communicate and solve problems – skills developed mainly through social and emotional learning (SEL). Combined with traditional skills, this social and emotional proficiency will equip students to succeed in the evolving digital economy. What skills will be needed most? An analysis of 213 studies showed that students who received SEL instruction had achievement scores that averaged 11 percentile points higher than those who did not. And SEL potentially leads to long-term benefits such as higher rates of employment and educational fulfillment.

The Center for MichiganThe Detroit Historical Museum wants your story from the summer of ‘67 What were you doing during Detroit’s 1967 civil disorder? If you had a “significant, first-hand experience” with the uprisings in the last week in July that year, the Detroit Historical Museum wants to hear your story for an oral history project it’s conducting in the run-up to the riot’s 50th anniversary next summer. The Detroit museum will have interviewers on hand to record your recollections this Saturday, Aug. 20, between 10 a.m. and 3 p.m. The stories will become part of the museum’s “Detroit 67: Looking Back to Move Forward,” which seeks to assemble a record of what Detroiters and suburbanites were doing during one of the most momentous weeks in Detroit’s 315-year history. Yann Minh Un article de Wikipédia, l'encyclopédie libre. Yann Minh lors d'une conférence en août 2014. Son univers d'inspiration futuriste et transhumaniste mêle érotisme, BDSM et science-fiction. Œuvres[modifier | modifier le code]

Free eBooks and Best Sellers 'Alien' gargoyle on ancient Paisley Abbey Media playback is unsupported on your device A gargoyle on a historic 13th Century abbey has caused a social media sensation with its resemblance to the monster from the Alien films. A photograph of the gargoyle at Paisley Abbey, which looks like one from the 1980s movie, has gone viral on Facebook and Twitter. The Reverend Alan Birss said most of the gargoyles were replaced during a refurbishment in the early 1990s. Study using Monopoly board game proves that-advantages change our behavior - Krazy Wolf Social-psychologist Paul Piff who focuses most of his research on social hierarchies and how these impact our lives and society in general, has presented very interesting findings through a study on the game of Monopoly. In his TED Talk held at TEDxMarin, Piff discusses a recent series of behavioral experiments centered on the game of Monopoly. These experiments involved multiple “rigged” games of monopoly in which one randomly-chosen player in a randomly selected group was given certain advantages…such as: twice the money, greater ability to move around the board (more than two dice!), and more access to resources (higher bonuses for passing ‘go’).

machine-learning platform / about #WeCounterHate (2018) With the advent of social media, technology gave hate a way to spread like never before. Twitter became a powerful weapon for those promoting hateful ideals. We decided to use the same technology that empowered hate, to stop it. Joël de Rosnay / hyper humanisme / Joël de Rosnay, (born 12 June 1937) is Docteur ès Sciences and scientific writer, presently President of Biotics International,[1] a consulting company specialized in the impact of new technologies on industries, and Special Advisor to the President of the Universcience (Cité des Sciences et de l'Industrie at La Villette et Palais de la Découverte) of which he was Director of Forecasting and Assessment until June 2002. Biography[edit] From 1975 to 1985 he was Director of Research Applications at l'Institut Pasteur (the Pasteur Institute in Paris).

The Radioactive Boy Scout (part 4) Tales from the Nuclear Age: Copyright © 2010 by Charles Glassmire Jan. 13, 2010 The Radioactive Boy Scout (part 4)* David was fissioning Uranium and Thorium in the makeshift “reactor” core he built in his mother’s potting shed in the back yard. As the radioactivity built up, one neighbor lady said she saw a “blue glow” at night coming from the shed.